Adams loses her gamble, and her winning streak in Paris – IAAF Diamond League

Valerie Adams may have described her competitive comeback at the Meeting Areva in Paris today as something of “a lottery” yesterday, but even the 2014 world athlete of the year cannot have imagined the numbers would fall so hard against her at her first IAAF Diamond League outing of 2015 on Saturday (4).

The world and Olympic champion’s five-year dominance of the women’s shot put came to a crushing end in the Stade de France this evening when she was defeated for the first time in 57 meetings on her return from shoulder and elbow operations 10 months ago.

Adams not only fell short of a 57th straight victory but could finish only fifth as Germany’s Christina Schwanitz cemented her reputation at the top of the 2015 putting pecking order with two throws beyond 20 metres and another four Diamond Race points.

Adams ended with a best of 18.79m from the fifth round and she never looked anywhere close to her commanding best.

“I took a risk and came to compete against all the best current girls,” she said afterwards.

“I knew the winning streak was in danger, and I lost it. But I do not feel that sorry. We can start again, and with better execution I will improve.”

Adams had received a great reception from the early comers to the Stade de France but the New Zealand great didn’t exactly announce her return with a bang, her first competitive throw for 10 months landing more than three metres short of her best at 18.17m.

Her second, a foul, fell short of the 17-metre line and with her third reaching only 18.25m she lay in sixth place at half way, trailing Schwanitz by nearly two metres.

Gong Lijiao was giving Schwanitz a great run for her money, though, the Chinese thrower, a Diamond League winner on home soil in Shanghai in May, eventually taking second with 19.75m.

US champion Michelle Carter’s final throw of 19.37m was enough for third.

Adams made up some ground in round four with 18.55m before her best in round five, but for a woman used to regularly peppering the ground beyond the 20-metre line this was painful stuff, not that Schwanitz is taking anything for granted as far the IAAF World Championships next month are concerned.

“It was a really very tough competition and it will be very tough in Beijing,” said the world silver medallist. “I expect Valerie to be back in top shape. She will improve.

“This is something special though. This win is very important to me because I beat Valerie for the first time in my career.”

Adams will hope it’s not the first of many. “There’s still a lot of time before Beijing,” she smiled.

Piotr Malachowski was smiling too after he extended his lead over fellow Pole Robert Urbanek at the top of the men’s discus Diamond Race standings with his third IAAF Diamond League victory of the year.

Malachowski won with a last-round throw of 65.57m having led from round one in what he described as his best competition of the season.

Urbanek, who was second in the Diamond Race by just one point before tonight, could only finish fifth, while Zoltan Kovago of Hungary clinched second with 65.23m.

World leader Jason Morgan had an off day, the barrel-shaped Jamaican finishing down in seventh.

The men’s long jump began as a close battle between Russia’s world champion Aleksandr Menkov and Michael Hartfield, but it was the US jumper who leapt to life in the final round to snatch victory from local man Kafetien Gomis with 8.19m to 8.13m.

The Frenchman had briefly taken the lead after Menkov saw his pre-eminence disappear in round five when Australia’s Fabrice Lapierre and Spaniard Eusebio Caceres both went beyond eight metres.

Menkov sat out the last two rounds, much to his cost, as first Gomis, then Hartfield took the honours.

Hartfield is now level with Britain’s Olympic champion Greg Rutherford at the top of the Diamond Race standings, while Menkov could eventually only finish fifth with a best of 7.99m. 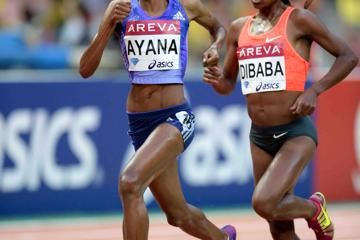 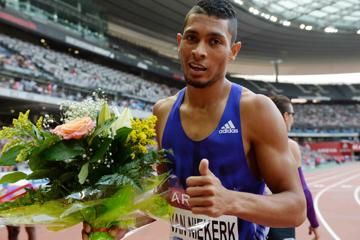