It didn't come easily for the double Olympic champion, who had Marie Josee Ta Lou for company until some 80 metres into the race, before surging to a slight lead she held through the finish, clocking 10.87.

"I'm pleased with my race," said Thompson, whose performance was her fastest since her 10.71 world lead at the Jamaican championships on 23 June. "My races are going fine and I'm in the shape I want to be in now."

Ta Lou wasn't too far behind in a season's best 10.90 to finish second for the fourth straight time in Diamond League action. Further back, Michelle-Lee Ahye of Trinidad and Tobago was third in 11.02.

Another Olympic champion, Shaunae Miller-Uibo, was a much more dominant winner, taking the 400m in 49.80 by more than a second over Natasha Hastings, who reached the line in 50.86.

“This was actually a training race for me,” Miller-Uibo said, minutes after her meet record run and appearing barely winded for her effort, one just 0.03 shy of her season’s best. “The time is good but that’s not very important for me now. What counts are the World Championships.”

The face-off with Olympic 800m champion Caster Semenya never fully materialised. The South African was lethargic from the gun and never in the hunt, eventually finishing seventh in 51.53. Afterwards, the 26-year-old was all smiles.

“It was hard to get moving, obviously, and to get a rhythm,” she said, smiling widely. “I haven’t raced in a month -- it’s been too long.”

Running just a step behind pacesetter Bram Som when he cruised past the bell in 49.81, Amos held a three-metre lead on Kipyegon Bett, his closest pursuer. The Kenyan ate up some of the deficit by the time the field reached the final bend, but Amos, in his teeth-baring fist-clinching style, powered on and away to a convincing 1:43.91 win.

It wasn't as quick as his world-leading 1:43.11 run in London one week ago, but it was as impressive, given his strong homestretch performance.

“I have been working hard on my speed,” he said. “When they were closing in on me I had a good finishing kick.”

There were three bouts of fireworks at the Prince Moulay Abdellah Sports Complex Stadium, two coming on the track as a warm-up to the post-meet display that lit up the northwest Moroccan sky.

The first came courtesy of Soufiane El Bakkali, who dominated the men’s 3000m steeplechase over the final two laps en route to an 8:05.12 lifetime best. Waving to the crowd in the far corner of the stadium as he approached the final turn, the crowd exploded in roars as he entered the straight for the final time, crossing the line more than five seconds clear of Kenyan Jairus Birech.

“What I expected has been achieved, namely the support of the crowd,” said El Bakkali, who finished fourth in the Rio Olympics last year. “I hope to go the world championship in London in good spirits and at a good level. There are strong competitors and I will fight until the end.”

That spirit showed when El Bakkali raced Olympic champion Conseslus Kipruto to the line in Rome last month, and a re-match here was one of the most anticipated face-offs for local fans. That in the end didn’t come to pass as Kipruto, running mid-pack, stopped running with just over two laps to go.

“I’m still having a lot of trouble with my right ankle,” said Kipruto, who also pulled out of Ostrava’s Golden Spike late last month. “I decided to race and I was hoping the pain would stay away. But it was wise to leave the race and try to get healthy.”

The second came in the evening-capping men’s 3000m, where long-time local favourite Abdelaati Iguider held off Spain’s Adel Mechaal in a frenzied homestretch battle that left the fans dancing, stomping and singing in the stands. Iguider clocked a season’s best 7:37.82 ahead of Mechaal’s 7:38.36.

The women's 1500m nearly witnessed the first Moroccan victory of the evening courtesy of world and Olympic finalist Rababe Arafi, only to be foiled in the last few steps by Poland's Angelika Cichocka.

Laura Weightman led the fairly tight pack through the bell, but Arafi took command as they entered the back straight, building a three-metre cushion the field. Brenda Martinez of the US was first to give chase, and appeared to be gaining ground midway through the final turn, with Cichocka on her shoulder.

The homestretch battle was a thriller. Propelled by boisterous fans that filled the homestretch stands to capacity, Arafe battled on, first fighting off, and eventually breaking Martinez. But the Pole fought back. Unrelenting, she powered by the Moroccan in the final ten metres to take the victory, clocking 4:01.93.

“This victory is very important for my confidence," said Cichocka, last year's European champion. "I worked on my finishing speed and that helped me win this race. That proves that my preparation is going well and I'm looking forward to the world championships now.”

In the women’s steeplechase, Gesa Felicitas Krause took command of the race over the last lap to collect her first career Diamond League victory, clocking 9:18.87, nearly two seconds ahead of Kenyan’s Norah Jeruto and Roseline Chepngetich, who clocked 9:20.51 and 9:20.69 respectively.

“Today I was able to show good tactics and a strong finishing kick,” said Krause, the 2015 world bronze medallist.

Andre de Grasse fell just short of his sub-20 goal, but he did manage another Diamond League 200m win in 20.03, another meeting record.

Running even with US champion Ameer Webb midway through the turn, de Grasse pulled ahead as they entered the home straight. Just as Webb appeared ready to find another gear, de Grasse found his own to pull away convincingly.

The men’s 100m quickly turned into a fierce two-way contest, with Chijindu Ujah of Great Britain holding off Ben Youssef Meite to win in 9.98, a season's best and meeting record just 0.02 shy of his lifetime best.

Ujah had a clear lead by the midway point but was pressured to the line by Meite, who clocked 10.01.

In the 400m hurdles, two-time world champion Zuzana Hejnova collected her first victory of the year with a 54.22 season's best. Jamaican Janieve Russell closed well, managing to cut some of the Czech's margin but still came up short, reaching the line in 54.36. 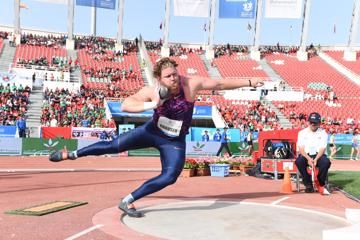 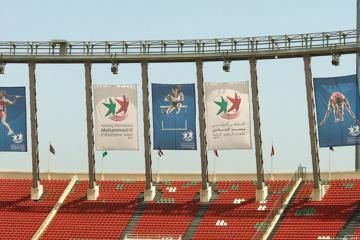