Usain Bolt may have been the star of the non-Diamond Race action, but it was his stable-mate Zharnel Hughes who produced the sparkle in the men’s 200m, the best of the six events with points at stake on day one of the IAAF Diamond League meeting in London on Friday (24).

The filthy wet weather in east London was hardly conducive for record-breaking at the Sainsbury’s Anniversary Games, but that didn’t stop the Jamaica-based Briton slicing a chunk off his personal best as he stormed home in 20.05 to leap to the top of the half-lap Diamond Race.

Hughes got a great start and ran a Bolt-like bend before holding off USA’s Dedric Dukes and South African Anaso Jobodwana into the -1.4m/s wind.

“I didn’t expect the PB because last week I had a niggle in my hamstring,” said Hughes. “I was just thinking relax and get to the line.

“It’s my first time in the stadium so I wanted to perform well. In the Olympics Bolt was also in lane seven, so I thought if he can do it, I can do it. I came out and I delivered. I got a PB, I got the win and I got extra points in the Diamond Race, what more can I ask for?”

Hughes has now set his sights on a podium place at the IAAF World Championships in Beijing.

“You never know what can happen but I'm going to try to go sub-20,” he said. “I think I could have run it tonight but there was a minus wind. Next time I will get it probably.”

World 400m hurdles champion Zuzana Hejnova ran 53.07 in this stadium en route to her undefeated 2013 season. The conditions made that sort of time difficult tonight but the Czech athlete showed that she is finally returning to top form with her second IAAF Diamond League win in a row, moving her two points behind Kaliese Spencer at the top of the standings.

After clocking 53.76 in Paris, Hejnova ran 53.99 on the soggy ground to beat US pair Georganne Moline and Cassandra Tate.

“I am very happy but the weather was horrible,” she said.

Indeed it was, and the slippery circle put paid to Diamond Race leader Piotr Malachowski’s chances in the discus. The Pole suffered a rare bad day, finishing fourth with 63.83m as Belgian Philip Milanov picked up four points after throwing 65.14m to push Robert Urbanek into second.

Orlando Ortega looked all set to underline his status as the world’s No.1 sprint hurdler when he skimmed over the puddle-strewn track to clock 13.21 in his heat. But the Cuban clattered two hurdles midway through the final and could only finish fifth in 13.32, the same time as 30th birthday boy Aries Merritt, who was fourth.

Ahead of them, Jason Richardson dipped as Frenchman Pascal Martinot-Lagarde hit the last hurdle, Richardson winning in 13.19. USA’s Ronnie Ash was third, meaning David Oliver’s position at the top of the standings remains untouched.

The women’s triple jump was missing the year’s top five performers, and the top five in the Diamond Race. Not that winner Olga Rypakova will mind as she picked up four points thanks to her winning leap of 14.33m.

The Olympic champion stole victory in the last round from Kimberly Williams who had led from the first round. The Jamaican improved to 14.15m on her final jump but it wasn’t enough to regain the lead.

Fassinotti won the competition with a first-time clearance at 2.31m as Barshim and Gianmarco Tamberi bowed out after clearing 2.28m.

Tamberi, sporting a half-shaved beard, was second on countback thanks to his first-time clearance at that height, although Barshim stays at the top of the standings despite finishing third in Oslo and fifth in Paris. 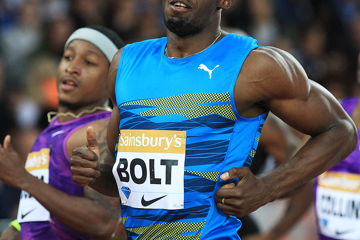 Bolt lights up London as Farah flies to world...