Rohler and Harting lead the way at German Championships

The weather may have been unpredictable, but Germany’s leading Olympic medal hopes turned in a consistent series of classy performances at their national championships in Kassel over the weekend (18-19).

It was unsurprisingly that it was the throwing events which served up the best contests inside the Auestadion, with team selectors for the Rio 2016 Olympic Games and upcoming European Championships left, in their own words, selectors with a “luxury problem”.

On Saturday, the men’s javelin certainly promised headaches for the selectors, with German throwers occupying three spots in the global top 10, topped by Thomas Rohler’s world-leading mark of 89.30m.

With an opening effort of 83.71m, Rohler virtually ensured victory, but behind him the podium spaces were hotly contested. After two rounds, four athletes had gone beyond the 80-metre mark, with Andreas Hofmann leading the pursuit.

However Rohler, the 2014 IAAF Diamond Race winner, didn’t leave anything to chance and hurled his implement an impressive 86.81m in the second round, the longest throw of the day.

It proved vital as Julian Weber, who had entered the competition with a personal best of 82.69m, improved to 83.73m to move into second. Andreas Hoffman’s best of 81.98m secured him bronze.

“It wasn’t easy today, but that is the javelin,” said Rohler. “I think my experience in competitions helped a lot and I threw every attempt differently. You’ve got to dip into various options and discuss things with your coach. Of course 90 metres is my main motivation right now.”

On Sunday the 'luxury problem' continued in the men’s discus and the women’s javelin.

Every German title in the men’s discus since 2007 has been won by a Harting – eight of them by three-time world champion Robert, one by his younger brother Christoph, who led the field based on season’s bests.

As the crowds gathered in the stadium corner near the discus cage, the throwers, of which five had already surpassed the Olympic A standard, began their quest for the three available spots on the Olympic team.

Robert Harting, gradually returning from his injury woes of the past 18 months, was out to regain the crown his younger brother had inherited in his absence last year, and the reigning Olmypic champion improved with every round to take the lead.

It wasn’t until the final round that brother Christoph, currently ranked second in the world, challenged Robert with a 66.41m throw. However the elder Harting, who was the final thrower in the field, took a deep breath before hurling the discus to 68.04m to take victory, an effort which moved him to number three in the world this year and within two centimetres of his brother’s season’s best.

The knowledgeable crowd didn’t have to wait long for things to heat up again as a world-class women’s javelin field took to the runway.

The 22-year-old Hussong lofted the javelin perfectly to set a German under-23 record of 66.41m, which would have been a world lead if Barbora Spotakova hadn’t claimed that spot earlier in the day at the Czech championships.

Elsewhere in the throws, the usual suspects delivered in both the men’s shot put and women’s hammer.

In the women’s 3000m steeplechase Gesa Felicitas Krause was one of the safe bets of the championship and the world bronze medallist duly obliged, clocking 9:31.00 to win the title in a championship record.

Teenage star Konstanze Klosterhalfen put on an equally impressive performance in the women’s 1500m. The 19-year-old had more than a 20-metre advantage as she crossed the line to win her first national title in 4:07.52, the fastest time at the German championships for 20 years.

“In Ostrava I ran well with a pacemaker so I wanted to prove I can run well on my own as well. I won’t be racing in Amsterdam, but at the world U20s instead; then I’ll turn my attention to Rio,” she said before setting off on possibly the day’s fastest victory lap.

In the men’s 1500m, Homiyu Tesfaye was the favourite but with 100 metres to go it was Timo Benitz who surprised him with a lethal kick to take the win in 3:40.28.

Having ticked off the Olympic 800m qualifier from her to-do list in the heats, Fabienne Kohlmann was looking to defend her national title from last year. in Sunday's final. However, Christina Hering took charge after 400m and secured the crown in 2:02.19.

Germany’s women are currently outshining their male counterparts in the sprints, and in Kassel it was rising star Tatjana Pinto who again showed her vast potential, winning the women’s 100m title with 11.22 into a 2.0m/s headwind.

However it was the 200m that really provided the fireworks on the track. Only two weeks ago, a German quartet including Pinto had recorded a world-leading 42.00 4x100m, and now the remaining three were lining up against each other in the 200m final.

Lisa Mayer entered the home straight in front, but was clawed back in the final metres by Gina Luckenkemper. Running into a slight 0.5m/s headwind, the 19-year-old took the title in 22.84, just 0.03 ahead of her relay partner, who improved her personal best by 0.17 in second placer.

In the women’s pole vault Martina Strutz improved her season’s best to 4.70m, while on the men’s side a gamble at 4.65m paid off for Tobias Scherbarth as he won with 5.70m.

BACK
Pages related to this articleAthletes
Martina Strutz 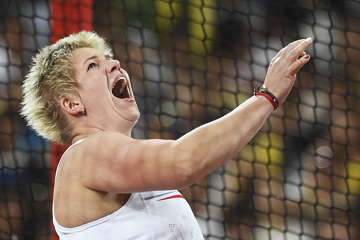 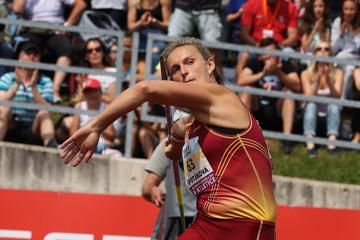 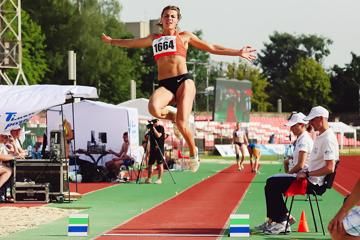