Stowers, Kohlmann and Ash among the meeting record-breakers in Bellinzona

Jasmin Stowers in action in the 100m hurdles (© Getty Images)

Following three successive losses, US sprint hurdler Jasmin Stowers returned to winning ways at the Gala dei Castelli in the Swiss city of Bellinzona on Tuesday (21).

The 23-year-old started her season in incredible form, reducing her PB to 12.40, 12.39 and then 12.35 to win at the IAAF Diamond League meeting in Doha. But the rest of her year has been a rollercoaster ride, after hitting a hurdle in Rome, getting disqualified for a false start in Birmingham, winning in Oslo and then finishing fifth at the US Championships, missing a place on the national team for the World Championships.

In Bellinzona, though, Stowers was back on top, breaking the meeting record with 12.62 to edge out two-time world indoor champion Lolo Jones, who set a season’s best of 12.65.

“The weather conditions were perfect for fast times,” said Stowers. “I am used to running in warm weather. I enjoyed running in front of this fantastic crowd.”

The meeting record also fell in the men’s event. Ronnie Ash clocked 13.13 in the pre-meeting programme to take 0.07 off Colin Jackson’s 110m hurdles stadium record. The US sprint hurdler didn’t start for the final in the main programme, which was won by British champion Lawrence Clarke in 13.42, 0.03 ahead of USA’s Jarret Eaton.

Former world record-holder Asafa Powell broke the 10-second barrier for the 90th time in his career. In warm and windless conditions, the Jamaican clocked a meeting record of 9.87, repeating the time he produced when winning in Lucerne last week.

Turkey’s Jak Ali Harvey twice bettered the track record set 16 years ago by Bruny Surin. First he clocked a national record of 10.04 in the heats and then later won the B race in 10.03. But that mark only lasted a matter of minutes as a meeting record as Powell significantly bettered it in the A race.

“It was a good race against a strong field,” said Powell, competing in his last race before the IAAF World Championships. “I am happy to run the first sub-10 on this track; the crowd pushed me a lot.”

Olympic 4x100m champion Tianna Bartoletta won the women’s 100m in 11.07, having earlier won her heat in 11.09. Switzerland’s Mujinga Kambundji broke her own national record with 11.17, taking 0.03 off the mark she set at last year’s European Championships.

One of the big surprises of the meeting came in the women’s 800m. World University Games bronze medallist Fabienne Kohlmann smashed her PB to take the win in 1:58.37, the fifth-fastest time in the world this year and the best by a German runner since 2000.

“I just destroyed the PB I set two weeks ago,” said the former 400m hurdler. “I can’t believe it!”

Amel Tuka, competing for the first time since his surprise world-leading win at the IAAF Diamond League meeting in Monaco, notched up another victory in the 800m.

As was the case in Monaco last Friday, the Bosnian athlete launched his kick on the final straight to pull away from second-place finisher Amine El Manaoui, winning by half a second in 1:45.80.

“It’s an amazing season for me,” said Tuka. “The Monaco win was amazing as everyone apart from David Rudisha was there.”

Swiss hero Kariem Hussein, the European 400m hurdles champion, won in front of his local fans with 48.93, his second-fastest time of the season. 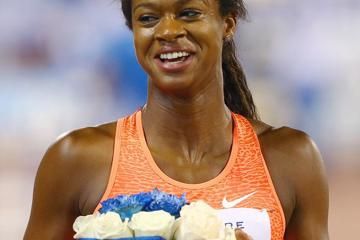 Stowers: "I always hoped I could become one o...