Stowers: "I always hoped I could become one of the best hurdlers in the world"

It has already been a turbulent season for the rapidly-rising hurdles talent Jasmin Stowers and it’s not even the middle of June.

The US athlete started off in blistering style, flying to a personal best and world-leading time of 12.40 at the Drake Relays in April, reducing both marks to 12.39 two weeks later in Kingston, and then showing superb poise in just the second IAAF Diamond League meeting of her career, beating a world-class field in 12.35.

However, things have unravelled in the last week in her two most recent IAAF Diamond League outings; having to stop after hurdle eight and then jogging across the line in Rome followed by being disqualified for a false start in Birmingham.

The pressure is now on Stowers to get back into Diamond Race contention with a good showing in Oslo.

However, the mere fact that Stowers is the focus of such attention would have seemed rather surprising at the start of the year, even to her.

She finished 2014 ranked equal 10th in the world on time, but no fewer than six of her compatriots were faster on a list led by 2014 Diamond Race winner Dawn Harper Nelson.

The Louisiana State University alumni wasn’t even the top collegiate hurdler, losing out to Sharika Nelvis, who is now her rival in the professional ranks and won in Rome, the latter also winning at the NCAA Championships last summer.

“People ask me how I’ve managed to go from where I was last year to running these sort of times,” said the articulate and affable Stowers in Rome last week.

“I think it’s to do with the fact that I have improved my shape and the first half of my race. I was always strong in the second half of the race but my start has got better, and my first three or four hurdles are better.

“My coach, Coach Shaver, (Dennis Shaver, who was also her coach at LSU) sat down with me at the end of last season and we looked at what I had to do, and we worked hard at it. The way I was running in practice and indoors made me believe I could run PRs (personal records, as US athletes like to say) this year.

“Winning the US indoor title in March (in a personal best of 7.84) was very important, that was my first big win and that really made me believe in myself.

“However, I can confess, I’m still surprised to be running so fast so soon outdoors. Running a PR is one thing; running 12.40, as I did at the Drake Relays, and then going faster, is something else.

“My start still has a lot of work to be done. It’s better, it’s more consistent, but there is still room for improvement.

“When I ran 12.39 in Kingston, it wasn’t a good start; it was better in Doha but it still wasn’t what I wanted it to be and I had to work hard to get into the race. (Australia’s 2012 Olympic champion) Sally Pearson – who I’d never raced before – got a good start and I hard to work hard to get ahead of her, but I’ve always been better at finishing.

“I think I demonstrated that in Doha. Now, I think I can say I’m a lot better at finishing races.”

Stowers, who hails from the small town of Pendleton in South Carolina where it’s a far bet to say she’s the closet thing they have to a celebrity, still seems slightly bemused by the fact that people want to talk to her in what is usually called the mixed zone, the place where the media chat to athletes coming off the track at major meetings.

“Well this didn’t happen last year, maybe at a few college meetings, but when I did a few end-of-season meetings in Europe, in places like Glasgow and Linz, I wasn’t the one they wanted to talk to,” joked Stowers.

“However, I always hoped I could become one of the best hurdlers in the world. My target now is 12.30.”

After Oslo on Thursday night, Stowers will get ready for the the US Championships in Eugene at the end of the month, which will decide who will represent the USA at the IAAF World Championships, Beijing 2015, alongside Brianna Rollins, who has already secured her spot as the 2013 world champion.

“It’s going to be tough to qualify, even though I’ve run fast times. Last year we had seven Americans in the top 10 and on any given day we can all beat each other. But the only other major international championship I have been to was the 2007 World Youths (where she finished fourth) so I’m very motivated to do my best to get to Beijing.”

Stowers, as shown in Birmingham, is still getting to grips with how to perform on the international circuit, but could still be the one to beat in Eugene later this month, when the US title is at stake, and then in Beijing at the end of August.

BACK
Pages related to this articleAthletes
Jasmin Stowers 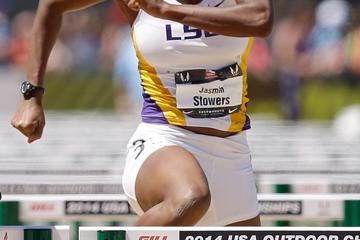 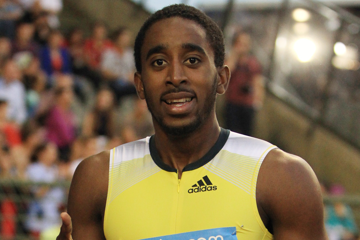 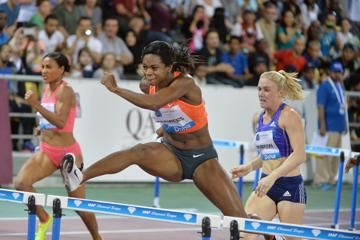