Caceres, Trost and Terzic help light up the European U23s

Eusebio Caceres at the 2013 European Athletics U23 Championships (© Getty Images)

The jumps provided some of the biggest highlights at the ninth European Athletics Under-23 Championships, which were held in Tampere, Finland, between 11-14 July, with pride of place going to Spain’s Eusebio Caceres and Italy’s Alessia Trost.

Caceres took his title with a leap of 8.37m, a full 10cm farther than he had ever done before, and improved his countryman Yago Lamela’s championship record from 1999 by one centimetre.

Italy’s Alessia Trost imposed her undoubted class to lift the High Jump title in an outdoor personal best of 1.98m, though she has gone higher indoors.

The women’s Pole Vault confirmed the Russian knack of producing excellent vaulters. Angelina Zhuk-Krasnova came to Tampere with a best of 4.56m but as the bar went higher, she just kept going over, finally calling a halt after clearing 4.70m with the slightest of brushes and the gold medal safely in her pocket.

The Russian had one failure at 4.60m, her first personal best of the day, but from then on she was inspired, setting three career bests in all.

What a time Germany’s Lena Malkus chose to set a lifetime best! Entering the final round of the Long Jump and lying in fourth place, she had yet to go beyond 6.56m, but dramatically improved to 6.76m, which was an improvement of four centimetres on her previous best and the gold medal-winning jump.

On the track, with an impeccably judged race, Serbia’s Amela Terzic won the women’s 1500m final in 4:05.69, a national record.

Employing the same tactics she had used to run way with the European junior cross country title in Budapest last December, Terzic swept into the lead 200m from the line and extended her lead all the to the finish.

It is not easy to come from the super-fast Diamond League and make your own way in tactical races. In his 800m heat, France’s 1:43-man Pierre-Ambroise Bosse had taken things a little too easy and qualified only in second place.

For the final, he made his own pace and this time there was decent gap between himself and the chasing pack all the way to the line.

Passing the bell in 51.75, slowly but surely the Frenchman turned the screw to move inexorably away from his rivals to collect gold in 1:45.79.

Serbia’s Emir Bekric took 400m Hurdles gold in a national record and what was then a European-leading time of 48.76. In second place, Great Britain’s Sebastian Rodger also set personal best figures of 49.19. Estonia’s Rasmus Magi was given the same time, which was also a national record, but he had to settle for third.

Great Britain’s Adam Gemili took the 100m gold, although the time of 10.20 into only the slightest of headwinds was a disappointment to him.

The winning time of 38.77 erased by 0.18 the championship record and European under-23 best held by France since Erfurt 2005.

Latvia’s Zigismunds Sirmais took his country’s first Javelin gold at this level after Latvians had won silver and bronze in previous editions. His decisive effort of 82.77m came in round three.

The IAAF World Junior Championships gold medallist in 2010, Ivakin beat Sobera by virtue of going over 5.60m with his second attempt, while the Pole had required all three.

Valentin Lavillenie has now a better record in this competition than his more illustrious brother, Renaud, who could finish no higher than 10th in Debrecen 2009.

Turkey’s Gamze Bulut, the London 2012 Olympic Games 1500m silver medallist, simply ran away from the field to take the 5000m gold by 50 metres from the defending champion, Azerbaijan’s Layes Abdullayeva.

Abdullayeva led the field through the first 1000m (3:11.49) and looked set to repeat her runaway win from Ostrava. In the end, there was a runaway win, but not from the Azerbaijani as Bulut had other ideas.

After the first kilometre Bulut then just took off, increased the pace, covering the third kilometre in a shade over three minutes before crossing the line in 15:45.03.

It was a feature of these championships (barring the men’s 5000m) that athletes have not been afraid to lead and Gesa-Felicitas Krause exemplified that to perfection when the German took 3000m Steeplechase gold in a championship record of 9:38.91.

Norway’s Isabelle Pedersen, the IAAF World junior champion in 2010, had collected European Junior silver in 2009 and 2011 and the out-and-out favourite in Tampere and did not disappoint, winning in 13.12.

She may not have competed in the Heptathlon all season, but it hardly mattered as Great Britain’s Katerina Johnson-Thomson took gold with a score of 6215.

The score represents the Briton’s third best score ever behind her 2012 Olympic Games total of 6267. En route to gold, Johnson-Thompson equalled her 13.48 best in the Hurdles and set a lifetime best of 23.45 in the 200m.

Despite being under-par after her ankle injury at Loughborough a week before she was due to compete in Gotzis, the Briton won in Tampere by the clear margin of 265 points.

BACK
Pages related to this articleAthletes
Eusebio CACERES 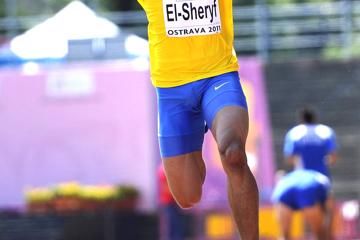