Five pieces of advice all new runners need to know

Recent research has confirmed that more than a third of the world’s population are more active now than they were before the Covid-19 pandemic began.

To ensure the millions of new runners across the globe are – quite literally – setting off on the right foot, over the next five days we’ll bring you five key pieces of advice that every new runner needs to know.

A former top-level Australian rules footballer turned 2:27 marathon runner, Telford also worked as Head of Physiology and Applied Nutrition at the Australian Institute of Sport and as Research Director of the ‘Lifestyle of Our Kids’ project.

In short, what Telford doesn’t know about running or exercise isn’t worth knowing. 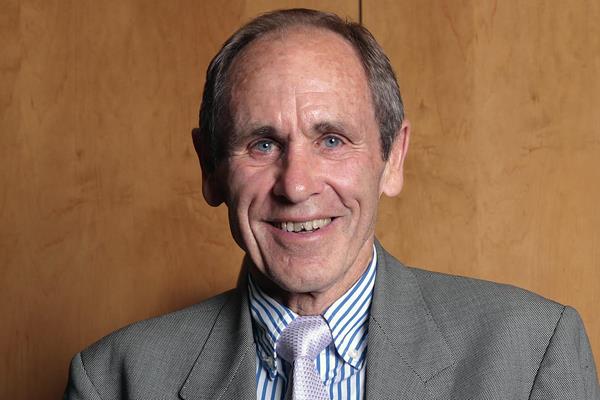 “Running is a great way to get exercise, because you get a lot of physical activity and energy output in a short period of time,” he says. “It’s different now to the ‘old days’ when we wanted to conserve energy. Now we know, as clearly set out by the World Health Organization, that lack of physical activity is a major cause – not just a link or correlation – of diseases like type II diabetes and heart disease, as well as some cancers. And evidence is continually emerging now linking physical activity and mental health.

“Physical activity makes us feel good,” he adds. “And muscle-brain ‘talk’ through nerves and hormones explains why running is a great way to keep sane in times like the current one.” 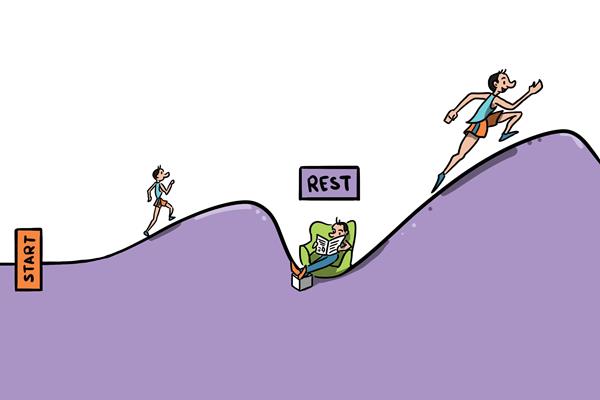 This applies to experienced runners too, not just beginners. I have a ‘minimal change’ policy with my running group, which ranges from fun-runners to Olympians.

Starting up jogging from scratch is a change, a new challenge to your chassis and power supply. So start gradually, feeling your way. There is no need to puff; just a steady controlled breathing rate is all you need. This will get you fitter, and gradually you can run a bit faster with controlled respiration.

It doesn’t have to hurt, and it shouldn’t. Leave that to later on, when you want to run a big personal best in the local fun run. Running faster, or running longer, or running up and down hills are changes which need to be introduced gradually.

Always start off well within your capacity. We often overestimate this. Even top runners do, and pay the penalty with a chassis problem, a running injury.

When starting a running programme, feel your way, just as top runners do. In other words, unusual tiredness and soreness means more time is required between your runs. Your nerves are sending a message to your brain on behalf of your muscles and joints, telling you to wait a bit longer before you ask it to do that again. 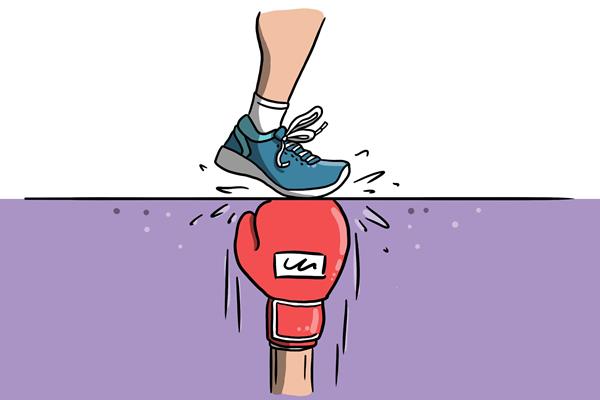 Along with impatience, one of the biggest mistakes made by new runners is an unwillingness to recognise that running is a contact sport.

Time after time, stride after stride, a runner will make contact with the ground with a force that is greater than their body weight. Respect that and adhere to the ‘minimal change’ policy (tip 1).

Put your toe in the water before plunging in. Avoid too ambitious changes in running distance, speed, frequency, surfaces, hills temperatures, shoes styles – each of which can lead to a tissue problem. It’s not a ‘no pain, no gain’ policy for those of us starting out.

Allow time for your muscles, bones, tendons, heart and lungs to adapt between your jogging sessions. Adaptation doesn’t happen in five minutes; it may take one day or two days to allow the body to adapt and become ‘fitter’ for the task. 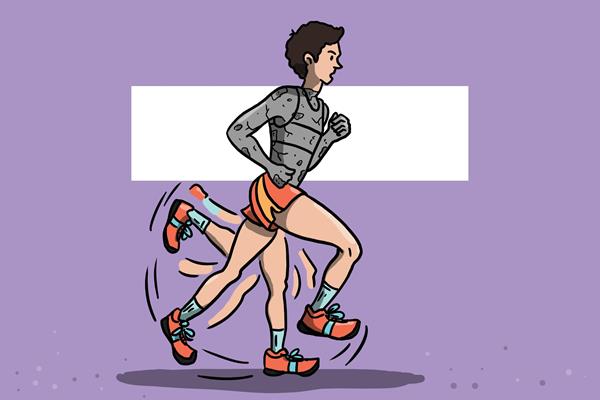 Advice on running technique is not straightforward by any means. We all have our own individual styles, and it’s only when very obvious flaws stand out should we look to make radical changes in the way we run. After all, changes in the way we feel natural can cause problems in themselves.

But there are always a few things to think about. Firstly, think about symmetry. It makes sense for your arms and legs to be moving symmetrically to maximise efficiency and minimise rotational discrepancies which can cause injury in the long term.

One thing I like in my distance runners is minimal upper body and arm movement, just enough to counteract the rotational forces of the lower body, but no more. We run with our legs, and our arms are there for balance.

Teaching any skill is going to be easier in the early days while the brain and body are developing fastest together. However, in running, I’ve found that changing a running technique – even in a relatively experienced runner – is also very doable. This has worked well on many occasions, although I’m never sure that looking better as a runner contributed to that runner performing better. We have to be careful that changing a technique doesn’t amount to a new stress on a joint that isn’t prepared for it, which can lead to an injury.

Tip 4: maintain flexibility and listen to your body 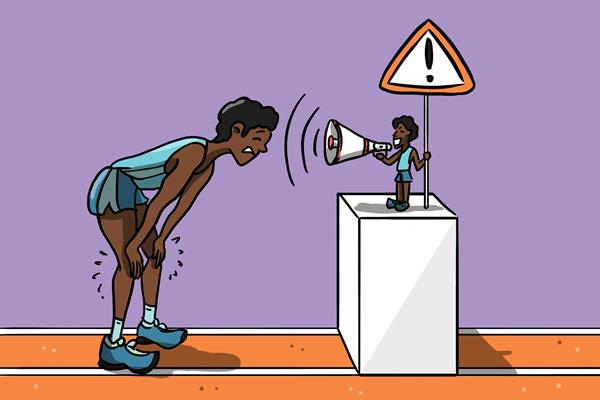 Interestingly, the most efficient distance runners I’ve measured over many years of assessments at the Australian Institute of Sport at the University of Canberra are those with lower levels of flexibility, and there are good explanations for this in terms of the way muscles contract during each stride. So it’s horses for courses, and while we need regular stretching, we only need to do enough to maintain the level of flexibility suited to our event.

As a warmup, it’s a jog, some race pace strides and some stretching – in that order. By all means, do some post-run stretching if it makes you feel good, otherwise just go for a warm-down jog.

If you experience niggling injuries at any point, it’s an early warning sign that the training stress has been too great.

Any sort of pain, even in the early stages, comes from pressure on a nerve, which may arise from inflammation arising from some form of disruption of normal tissue function so should be regarded as a minor injury. Nipping it in the bud is the way to go.

Tip 5: find the right balance with when and how to fuel 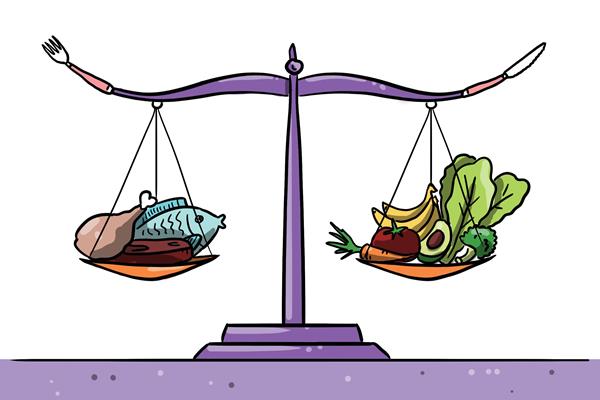 For an easy morning run, if you’ve eaten well the night before, and don’t feel perilously hungry, then running on an empty stomach has its advantages. It forces our liver to control the blood glucose level and developing better blood glucose control is one of the big benefits of running. On the other hand, a slice of toast and a drink before a morning run is commonplace in our seasoned runners who know from experience what suits them best.

Interestingly, some marathon runners like to go out for their long runs without any food prior to the run, as they believe that will teach them to conserve their muscle glycogen (glucose) supply. However, a small pre-run snack makes little difference to the training effect in the long run.

In short, running is best done when the blood supply is not being simultaneously challenged by digestion requirements. If you plan well, you will have a relatively empty stomach before you run, around three or more hours after a light meal, or in the morning after a good meal the night before.