Oympic 800m champion and world record-holder David Rudisha opened his 2015 season with an impressive 1:45.01 win at the Sydney Track Classic on Saturday night (14).

Rudisha strode powerfully away from Alex Rowe over the final 200 metres after the Australian had desperately tried to cling to his heels in the hope of being dragged to a national record.

The Kenyan world record-holder’s fourth visit to Australia in the past six years brought his slowest winning time over two laps during that time, but he had warned before the race that he was not as advanced in his preparations as in his earlier visits.

Nor did he run a 400m race as a lead-in, which he has done ahead of his other three visits Down Under.

Consequently, it was no surprise when Rudisha’s preferred pacemaker, Sammy Tangui, went through 400m in a tick under 51 seconds rather than his customary 49-point something. Rudisha was a couple of strides back in about 51.5 with Rowe on his heels.

Rudisha said he was happy with his run, considering the limited amount of specific preparation he has had in his absence through injury.

The aim for this year is simple: to return to the top of the pile over 800m.

Rudisha will clash again with Rowe, as well as Jeff Riseley and last year’s national champion Joshua Ralph, at next Saturday’s Melbourne World Challenge meeting, the opening leg of the 2015 IAAF World Challenge.

Dani Samuels, another former world champion returning to the top of her game, smashed her own meeting record in the women’s discus, topping her efforts with a distance of 66.21m.

Samuels was a surprise winner of the world title in Berlin in 2009, handling the pressures of a storm- delayed competition better than her older and more experienced rivals.

Although remaining a contender and in the world’s top 10, Samuels’ performances dipped in the following years before she re-discovered her consistency in 2013 and last year.

There was an upset in the men’s high jump as Australian Brandon Starc cleared a lifetime best of 2.30m to beat Canada’s 2.40m man Derek Drouin and his teammate, Michael Mason, who both cleared 2.28m.

All three kept a clean sheet through 2.23m with Starc first taking the lead with a first-time clearance at 2.26m, the others taking two attempts.

Mason took over the lead at 2.28m when he got that height first time, with Drouin going over second try and Starc at his final attempt.

Just as it seemed the Australian would have to be satisfied with an IAAF World Championships qualifying performance, he produced a clutch third effort at 2.30m to also claim a memorable win.

Another upset came in the women’s 200m when Ella Nelson produced a lifetime best of 23.24 to win. Melissa Breen took second in 23.39 and pushed Sally Pearson, who ran 23.44, down into third place.

Pearson has rarely brought the same authority to the half-lap distance as she does to her pet 100m hurdles event and the flat 100m but it is still a rare thing for her to lose domestically, especially given her seemingly unquenchable competitive drive.

This time, though, she had no answer as first Nelson and then Breen came past in the final 20 metres. “I don’t know what happened in that race,” she said. “It was just one of those things, I guess.”

Spare a thought for Breen who has just two wins over Pearson in many, many meetings. One brought a national record for the 100m last year, but this time she had her thunder stolen by Nelson.

Ryan Gregson and Andrew Wheating both broke through in the same 1500m race at the 2010 IAAF Diamond League meeting in Rome and both have enjoyed mixed and unsustained success since.

In Sydney they were first and third in their best joint performance since.

The race looked to be Jeff Riseley’s as he trailed the pacemakers through 800 metres in about 1:55, but the pace had already slowed a little and Riseley could do no more than maintain it through the third lap.

This allowed Gregson to regain lost ground and when he was at his rival’s shoulder on the final turn there was certain inevitability to the result.

Gregson sprinted home a delighted winner in his home town in 3:36.51 with Riseley a couple of metres down in 3:36.87. Wheating worked his way up through the field to take third in 3:38.75.

Kenya’s Magdalene Masai won the women’s 5000m in an outdoor world lead of 15:10.46. The race served as the Australian championship which went to second-placed Madeleine Heiner in 15:21.09.

BACK
Pages related to this articleAthletes
Dani STEVENS 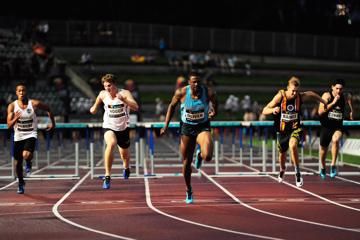