Her big sister Tirunesh has twice been a world record breaker indoors and it was the turn Genzebe Dibaba to make her own mark on the under cover record books when she smashed the women's world indoor 1500m record * by more than three seconds with a run of 3:55.17 at the IAAF Indoor Permit meeting in Karlsruhe, Germany, on Saturday (1).

The previous best had been 3:58.28, set by Russia’s Yelena Soboleva in 2006, and Dibaba's own previous indoor best was 4:00.13. Her time was also more than a second faster than Abeba Aregawi's Ethiopian outdoor record of 3:56.54 and the outdoor African record of 3:55.30, set by Hassiba Boulmerka.

Slovenia’s Sonja Roman took Dibaba through 400m in 1:02.39 and then 800m in 2:08.96, just under a second faster than Soboleva at this stage in proceedings on her world-record run with the Russian having clocked 2:09.7 after four laps of the track. But soon afterwards the Ethiopian hit the front and then it was just a race between her and the clock.

“I felt I was ready for a world record,” said the world indoor 1500m champion who is set to defend her title at this year’s edition in the Polish city of Sopot next month. “But I didn’t think I would run 3:55. I was well prepared for tonight, though. I’m extremely happy.”

The city of Karlsruhe had replaced the 25-year-old surface in the Europahalle only last summer, and Dibaba admitted that “the track was very fast,” compared to previous years. She has become a regular visitor to Karlsruhe and won the 1500m at the same meeting in 2012 and last year.

In a repeat of the gold and silver medal positions from the IAAF World Championships in Moscow last summer, Storl opened with a meeting record of 21.33m and that proved to be the winning throw.

He then pushed himself unsuccessfully the rest of the way in an attempt to take over the world lead. “I didn’t have enough tonight to hit 21.50m,” commented Storl, “but my second throw had potential if I had not fouled.”

Storl also referred to the stress of having competed, and winning, only two nights earlier in Düsseldorf. Whiting, who had arrived straight from winning in Bydgoszcz with a world-leading 21.37m on Friday evening, was clearly tired as well but finally got over 21 metres in the fourth round, reaching 21.01m, which proved to be the US putter’s best effort of the night.

Both Sifan Hassan and Maryam Jamal were breaking new ground in the women’s 3000m, the Dutch runner was seeing an indoor track for the first time and the Bahraini making her indoor debut at the distance.

Hassan came out the definite winner as she kicked off the bell and passed Kenya’s front-running Viola Kibiwot for a world-leading 8:45.32 victory over Kibiwot’s 8:48.12, while Jamal was a distant third in 8:56.90.

In the men’s 1500m, Kenya’s 2013 IAAF World Championships finalist Nixon Chepseba took the lead from Germany’s Homiyu Tesfaye halfway through the race and carried on in front to the tape for a world-leading 3:37.02. Ethiopia’s Mekonnen Gebremehdin was second in 3:37.42 and South Africa’s Moscow bronze medallist Johan Cronje was again third in an indoor personal best of 3:37.49.

Another Kenyan to triumph in Karlsruhe was Caleb Ndiku, who won the men’s 3000m in a quick 7:36.27, the second fastest time of the year.

Germany’s Nadine Hildebrand produced a superb run over the barriers to win the women’s 60m hurdles in a world-leading 7.91. In fact, Hildebrand twice set world-leading times and had a brace of personal best outings after running 7.96 in her heat.

In the men’s 800m, Bahrain’s Abraham Rotich derailed some gun-to-tape running by Marcin Lewandowski in the final few centimetres as his late charge pipped the Pole at the finish, although both were given identical 1:46.30 times. It was an indoor best for Rotich, with Spain’s Kevin Lopez finishing third in 1:46.88.

In the women’s 60m, the clock stopped at 7.18 for the three top in a blanket finish, with Germany’s Verena Sailer getting the decision over US sprinter Chauntae Bayne and Norway’s Ezinne Okparaebo. The time moved both Sailer and Okparebo to the top of the European list for the season and was also an indoor best for Bayne.

Even in the absence of local stars Raphael Holzdeppe (bad back) and Björn Otto (injured foot), the men’s pole vault still ended in German hands and with good quality as Malte Mohr used a dramatic third-jump clearance to win at 5.75m before failing at 5.85m.  Although Mohr later said he was “super satisfied”, he worked hard for his victory, being pressed to a third attempt twice and taking a total of eleven jumps.

US hurdlers Jarret Eaton and Kevin Craddock went one-two in the men’s 60m hurdles, posting times of 7.54 and 7.58 respectively, while France’s Eloyse Lesueur won the women’s long jump with 6.67m.

Phil Minshull and Ed Gordon for the IAAF

*Subject to the usual ratification procedures. 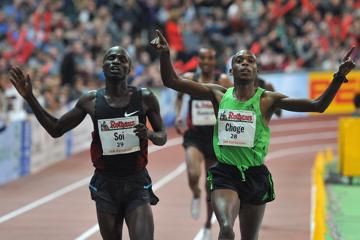 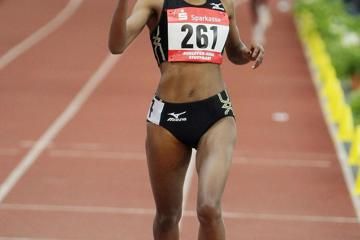