US men break world U20 4x400m record in Trujillo

The US quartet of Brian Herron, Josephus Lyles, Zachary Shinnick and Sean Hooper after their 4x400m world U20 record at the Pan-American Junior Championships in Trujillo, Peru (© Talia Vargas/organisers)

A US quartet broke the world U20 record on the final day of the Pan-American U20 Championships in Trujillo, Peru, clocking 3:00.33*, to cap the 19th edition’s three-day event on Sunday (23).

Zachary Schinnick, Josephus Lyles, Brian Herron and Sean Hooper eclipsed the previous world U20 record of 3:01.09 set by another US quartet at the 2004 World Junior Championships in Grosseto.

Headed by that world record, 13 championship records were set in Trujillo’s Estadio Chan Chan, marking this edition, the first held on Peruvian soil, as one of the most successful in the history of the event, which was first held in 1980, in Sudbury, Canada.

Jordan Geist delivered another remarkable result in Trujillo with his 22.02m victory in the shot put, setting a championship and US U20 record in the process. Eachof his four valid attempts --21.53m, 22.02m, 20.69m and 20.98m-- were superior to the previous championship record of 20.36m, set by compatriot Mason Finley in 2009. Jamaica’s Kevin Nedrick (20.34m) and American Adrian Piperi (20.26m) completed the podium.

Other day three winners included Tate Curran of the US who took top honours in the pole vault at 5.20m. Robert Vilches of Mexico won the high jump with a first attempt clearance at 2.21m. 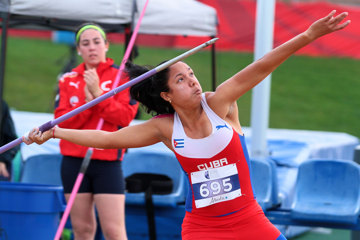 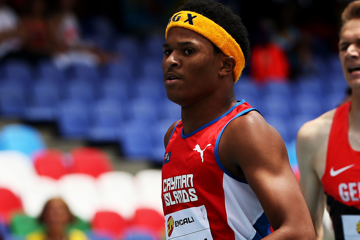