Yulenmis Aguilar’s world junior javelin record* capped a highly competitive 18th Pan American Junior Championships at Foote Field in Edmonton, which concluded after three days of action on Sunday (2), as the USA clearly dominated with 56 medals, including a record 30 titles.

Coming from a disappointing sixth place at the Pan American Games in Toronto, 2013 world youth silver medallist Aguilar unleashed the 600g implement to 63.86m on her first attempt to erase the previous mark of 63.01m set by Vira Rebryk in 2008.

On the eve of her 19th birthday, Aguilar confirmed her superb form with a 63.33m effort with her second throw. After a pass and a 57.01m throw in the fourth round, she finished her competition.

“I knew I had a big throw when I released the javelin, over 60 metres, but never thought it would be the world record,” said Aguilar. “My team-mates had performed well this weekend and I also wanted to contribute. This record is great, the best gift for my birthday.”

With this massive throw, she has improved on her pre-2015 personal best by more than nine meters and has met the standard to compete at the IAAF World Championships in Beijing later this month and the Olympic Games in Rio next year.

One day before, 17-year old Vashti Cunningham of the USA produced a superlative mark when she equalled the world youth best in the high jump with a first-time clearance at 1.96m.

After securing the gold medal with 1.86m, she went on to break the 24-year old championship record with 1.91m. Following two misses at 1.94m, she asked the bar to be raised to 1.96m and cleared it with her last chance. She ended her competition after three misses at 1.99m.

“It is a big relief,” said Cunningham, whose mark also broke the North American junior record. “I wanted to go higher this year and it happened in the last and most important meet of the season. I was so happy. I knew I only had once chance and that 1.96m was a leap of faith.

“I know I can go higher next year,” added Cunningham, who passed up the chance to compete at this summer’s IAAF World Youth Championships. “It feels really good to be at the Pan Am Juniors. I like to compete with people of the same age. Everyone is cheering for each other.”

Her brother Randall completed a family double as he claimed the men’s high jump gold with 2.16m. Their parents, including father and former NFL quarterback Randall Cunningham, were watching from the stands.

Other US athletes capped their season with remarkable performances and championship records. World junior silver medallist Raven Saunders threw 18.27m to win the shot put and Rachael Reddy clocked 16:23.35 in the 5000m.

Sixth at the 2014 IAAF World Junior Championships, Harrison Williams improved four personal bests and dominated all non-throwing events to complete the decathlon in 8037, adding 19 points to the US junior record set by Gunnar Nixon in 2012.

Stefany Coronado made history by winning Bolivia’s first gold ever in the history of the Pan American Junior Championships and she did it in commanding fashion with a championship record of 47:05.11 in the 10,000m race walk. Ecuador’s South American junior champion Karla Johana Jaramillo was also inside the former record, clocking 47:47.61.

Fresh from his world youth championships victories two weeks earlier in Cali, USA’s Norman Grimes won the 400m hurdles in a personal best of 50.10, moving him to eighth on the world youth all-time list for the senior-height hurdles.

Trinidad and Tobago’s Khalifa St Fort improved from silver in Cali to the 100m gold in Edmonton, winning comfortably in 11.31.

Having missed out on a medal in Cali by a short margin, Cayman Island’s Jamal Walton took the 400m in Edmonton in 46.09 and Cuba’s Juan Miguel Echevarria dominated the long jump, winning with 7.76m.

Reynier Mena became the first Cuban to take the Pan American junior 100m title, winning with a national junior record of 10.17 in a photo finish over USA’s Youth Olympic champion Noah Lyles (10.18). Lyles took revenge in the 200m with 20.27 ahead of the Cuban (20.34).

South America had other moments of glory when Chile’s Humberto Mansilla beat Argentina’s world junior leader Joaquin Gomez in the hammer with a fifth-round effort of 80.21m, a national and championship record and the second throw beyond 80 metres by a junior this year. Third at the 2013 edition in Colombia, Mansilla became only the sixth Chilean to win a continental junior crown.

A total of eight championship records fell over the three days of competition. Carl Lewis, nine-time Olympic champion and three-time winner in the first edition of the event in Canada in 1980, was a special guest. The Peruvian capital of Lima will host the next edition of the championships in 2017. 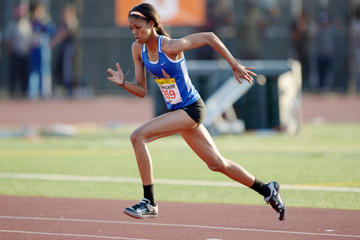 Las Vegas high jumper Cunningham is a good be... 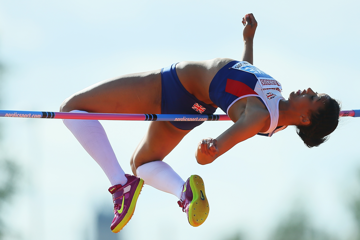