Whiting extends world lead in the Shot at US Indoor Championships

Ryan Whiting throws a world-lead of 21.80m at the US Indoor Championships (© Kirby Lee)

Ryan Whiting extended his world-leading mark in the Shot on the final day of the USA Indoor Championships at the Albuquerque Convention Centre on Sunday (March 3).

The final session also included fast times in the 60m sprints and wins by juniors Mary Cain in the women’s Mile and Ajee’ Wilson in the women’s 800m in their inaugural appearances in the senior championships.

Whiting threw 21.80m to surpass his mark of 21.59m set at State College last month. All of Whiting’s four legal throws exceeded 21 metres, surpassing the runner-up mark of 20.93m by Cory Martin, who ranks second on the world yearly list. With marks of of 21.38m and 21.10m also to his credit this indoor season, Whiting now owns the top four throws in the world for 2013.

Although Whiting has been training primarily with outdoor implements, the World indoor champion still had designs about throwing a season’s best in Albuquerque. Whiting followed a similar workout regimen when he won the 2011 USA Indoor title.

“It’s kind of a trade-off, I feel pretty good about where I am at,” said Whiting. “I did the same thing two years ago but I have learned a lot since then.”

D’Angelo Cherry and Barbara Pierre ran US-leading marks in the men’s and women’s 60m. Cherry won the men’s 60m in 6.49, breaking the 6.52 PB he set four years ago when setting the American indoor junior record. Reggie Nixon was second (6.54) with Jeremy Dodson third (6.58), both of them also setting personal bests.

Pierre, who finished fourth at last year’s World Indoor Championships, nipped Lakeisha Lawson to win the women’s 60m, 7.08 to 7.10. For Pierre it was redemption after a runner-up finish in 2012, while Lawson’s time was a huge PB. Her best before this weekend was 7.25.

Sixteen-year-old Mary Cain and 18-year-old Ajee’ Wilson were on an accelerated learning curve, competing in their first senior national championships. Cain’s winning time of 5:05.68 in the 1600m altitude of Albuquerque was the slowest winning time since 1969 and well off her World youth indoor best of 4:28.25 set at the Millrose Games last month.

Victory, though, was more important than time for Cain, who closed with a 58.61-second final 400m after a pedestrian first half to pull away from Treniere Moser and Brie Felnagle to become the first high school winner at the USA senior championships since Allyson Felix won the 200m in 2003.

“I know I have a kick so I thought if nobody wants to go now I’ll really go the last 400m and kill it, and that’s exactly what I did,” said Cain.

In the women’s 800m, Wilson took almost two seconds off her indoor PB with 2:02.64 to defeat Chanelle Price. Wilson, the World junior champion in this event, didn’t envision herself in this position at the start of the year. She turned professional and relinquished a scholarship to Florida State after setting a World junior indoor 600m record in January.

“I was definitely nervous. I set a PB, so I’m just happy all-around,” said Wilson.

After winning the 3000m on Saturday, Will Leer returned on Sunday to win the Mile in 3:58.79 for the fastest US time run at altitude. Unlike the 3000m where he was unchallenged, Leer duelled Craig Miller on the home-stretch to win by 0.11.

Jeremy Wariner had a victorious debut at the USA Indoor Championships by winning the 400m in 45.82. It was his first indoor race since 2004 when the three-time Olympic gold medallist won the 2004 NCAA Indoor title.

An anticipated duel against Bershawn Jackson never materialized when the 2005 World 400m Hurdles champion pulled up on the first backstretch. Ebonie Floyd won the women’s 400m in 52.02 after navigating clear of a fall by Mary Wineberg at the start of the bell lap.

In the women’s 60m Hurdles, Nia Ali was a 7.93 to 7.97 winner over Kristi Castlin. Omo Osaghae prevailed over Brendan Ames, 7.62 to 7.72, in the men’s 60m Hurdles that was interrupted three times-twice by a false start and a third when the runners were called out of the blocks. Two-time World Decathlon champion Trey Hardee, who competed in five of seven events in the Heptathlon on Friday and Saturday, was third in 7.74.

Michelle Carter posted a US-leading effort of 19.41m – her second-best indoor performance to date – to win the women’s Shot. Jordan Scott won the Pole Vault with a third-attempt clearance at 5.60m, while 2007 World champion Brad Walker was sixth at 5.35m with his only clearance of the afternoon that was followed by three misses at 5.55m.

Inika McPherson won the women’s High jump at 1.89m with Pentathlon winner Sharon Day in second at 1.83m. Amanda Smock defended her title in the women’s Triple Jump at 13.65m, while Joshua Honeycutt was the men’s winner with a sixth-round effort of 16.59m.

BACK
Pages related to this articleAthletes
Ryan Whiting 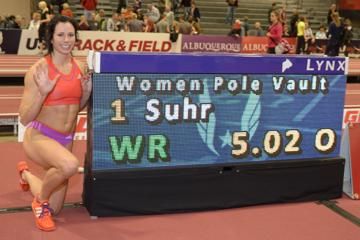