Switzerland’s Maude Mathys retained her title and Spain's Kilian Jornet claimed yet another win at the Sierre-Zinal in Switzerland, a WMRA World Cup series race, on Saturday (7).

As far as mountain running goes, by anybody’s metrics Sierre-Zinal is among the most revered races in the world. It always attracts high-quality fields and this year's race was no different, with eight-time winner Jornet, three-time winner Lucy Murigi, both record-holders in Mathys and Jornet and both leaders of the current world rankings in Murigi and Henri Aymonod. Throw in a huge number of athletes who regularly appear on podiums for mountain and trail races all over the world every week and the race was definitely on.

The first timing point was at Ponchette, around 7.5km into the race, and it was no shock to see Mathys emerge first, but it was something of a surprise to see Nienke Brinkman of the Netherlands in second place. Her recent win at the Zermatt Marathon showed her class, however, even if she wasn’t among the known pre-race favourites. Anais Sabrie of France was next to reach Ponchette, completing the women’s top three.

In the early stages of the men’s race, Jornet was biding his time, sitting in behind Switzerland’s Remi Bonnet and Petro Mamu of Eritrea on the first climb. By the time they reached Ponchette Mamu, Jornet and Bonnet had struck out and were all together and this continued to Chandolin (12km). At this point, Jornet decided that he was going to have to put some distance between himself and Mamu. In true Jornet style, even while hammering it downhill he was still smiling and chatting with the ebike riders manning the video cameras. He succeeded in striking out alone, opening a small gap, and Mamu was left in his wake, falling back a few places.

Meanwhile, in the women’s race Mathys maintained a small lead of just over a minute at Chandolin, while Brinkman continued to chase and maintain a good gap of four minutes on third-placed Sabrie. Behind Sabrie, Blandine L’Hirondel of France was about a minute behind.

Behind Kilian the men’s race was definitely a race of two halves. Bonnet had fallen off the pace a little and the Grossglockner Berglauf winner, Lengen Lolkurraru of Kenya, was now chasing Jornet hard in second. Thibault Baronian of France and Italy’s Cesare Maestri were lurking in fourth and fifth place, within striking distance of the podium places, and Great Britain’s Robbie Simpson, who has three Sierre-Zinal second-place finishes to his name, had moved up to seventh.

Mathys continued to push hard and was dominating the women’s race. She laid down an unbelievably fast 1:55 split at Hotel Weisshorn, giving her a four-minute lead over Nienke Brinkman. Sabrie was now five minutes behind Brinkman, but as the commentators kept highlighting, both Brinkman and Sabrie may be faster on the descent than Mathys, so that last 7km of downhill could still make all the difference.

By the next timing point at 25km in Barneuza, well into the start of the descent, it was all happening in the men’s race. Jornet was still in the lead and had about 90 seconds on second-placed Lolkurraru, but now Simpson was just behind in third and Maestri was on his heels. The men’s race was all coming down to who was the best descender and who had the legs when they hit the concrete.

The same was true in the women’s race. Mathys was taking the steep switchbacks carefully and Brinkman was gaining a little, but the gap was just too big and Mathys hit the finishing straight over three minutes ahead, with so much buffer that she decided to walk some of the final metres on her hands. It was a third victory in a row for Mathys, who looked elated.

Shortly afterwards, Jornet rounded the corner to take his ninth victory. It was a great touch that he was greeted by Mathys and they could celebrate together, with the women’s race having set off 15 minutes before the men’s. Just 42 seconds after Jornet, Simpson claimed second place, his fourth runner-up spot at the event, but he proclaimed it his “best second” in his post-race interview. Brinkman claimed a huge second place in the women’s race, while Sabrie and Maestri completed the men’s and women’s podiums. 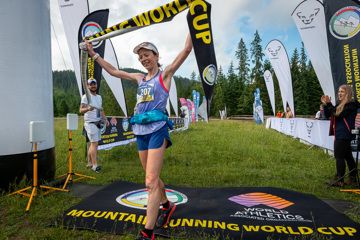 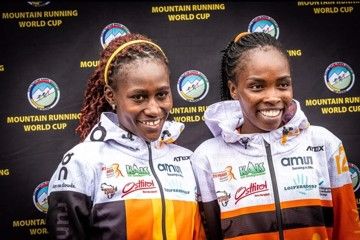 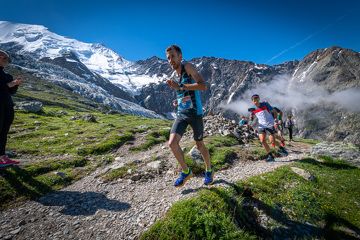