Shamier Little moved to the top of the 2015 world 400m hurdles list with her 53.74 run to win at the NCAA Championships in Eugene on Saturday (13).

Sporting a bright yellow flower in her hair, Little had to come from behind to win down the home straight and overhaul Keni Harrison, who had won the 100m hurdles earlier, on the run in after the 10th hurdle.

“I didn’t see her until the eighth hurdle,” the 20-year-old Little told local reporters after successfully defending the title she won in 2014.

“I knew we were pretty close so I knew I had to keep my form, that was the only way I was going to be in contention for the victory. I just went after it and gave it my all; that last few metres after the 10th hurdle is a killer.”

It was a huge personal best for the Texas A&M student, who took the world junior title less than 12 months ago on the same Hayward Field tack.

She started the summer with 55.07, the time she ran to win the 2014 NCAA title as a teenager. She brought that time down to 54.68 last month and has now become the first woman to run faster than 54 seconds this year.

Harrison also made a huge improvement to 54.09 and although she finished as the runner-up to Little for the second consecutive year in the 400m hurdles, she did leave Eugene with an NCAA title to her name after winning the 100m hurdles in 12.55, helped by a following wind of 1.7m/s.

Behind Harrison, Cindy Ofili – sister of the well-known British international hurdler Tiffany Porter who was a three-time NCAA 100m hurdles winner – improved by 0.21 to 12.60 to take second.

Behind the leading pair, third-place finisher Dior Hall improved the world junior record (subject to conforming with the ratification procedures) with 12.74.

The previous mark of 12.84 had stood to Cuba's Aliuska Lopez since 1987, nine years before the 2014 IAAF World Junior Championships silver medallist was born.

Jenna Prandini, running on her home track as a University of Oregon student, won the 100m in a wind-assisted 10.96 (3.1m/s), just getting the verdict from Morolake Akinsun who was 0.01 in arrears.

Prandini almost made it a double later in the afternoon but had to settle for second in a thrilling 200m which saw Dezerea Bryant, who had been third in the 100m, speed to a 22.18 victory.

Prandini was second in 22.21 while Kamaria Brown and Kyra Jefferson – the latter possibly the slight favourite after being the fastest in Thursday’s semi-finals with 22.26 – were third and fourth but given the same time of 22.24.

The first six women home all set personal bests, helped by a 1.9m/s breeze on their backs.

Another home triumph for the University of Oregon, which followed in the footsteps of their male counterparts on Friday and won the overall women’s team title, was delivered by Raevyn Rogers over two laps of the track.

Natoya Goule, who was to eventually finish sixth, controlled the race for the first 600m but, going into the final bend, the 18-year-old Rogers went through the gears and pulled away to win in personal best of 1:59.71.

“I still can’t believe that happened,” said the 2013 world youth bronze medallist, who admitted that she had almost been overcome by pre-race nerves and vomited twice.

“I just wanted to win, and I was going to accept whatever. I wasn’t aiming for 1:59, but I was just happy that it came with me trying to focus on my race.”

The pick of the field events on Saturday was the triple jump, won by Keturah Orji.

Like Rogers, Orji was also a bronze medallist two years ago in Donetsk but she showed her growing maturity to add 17cm to her best with a second-round leap of 14.15m, breaking the US junior record in the process.

In addition to the win, it was also partial compensation for Orji after a below-par long jump competition on Thursday, when she could do no better than seventh.

Shelbi Vaughan, a Texas A&M team-mate of Little’s, won the discus with 61.39m, more than two metres ahead of her nearest rival.

"It wasn’t the series I was hoping for,” said Vaughan, despite having had the best winning distance for 11 years. “My back was tightening up on me a little bit, so I couldn’t get it around much, but I’m really happy with another victory and defending my title.”

Times in the long distance events were relatively modest, partly due to the gusting wind which helped produce good performances in the sprints and hurdles, but British runner Rhianwedd Price still managed to win the 1500m in a personal best of 4:09.56, holding off Shelby Houlihan in a battle for the line, the latter finishing second in a best of 4:09.67.

BACK
Pages related to this articleAthletes
Jenna PRANDINI 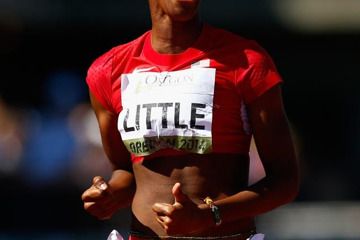 Little no longer a diminutive figure in the w... 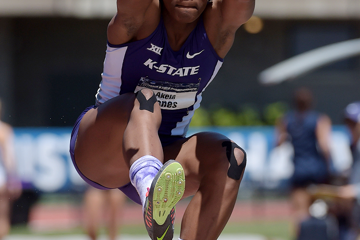