Dolezal and Kunz victorious in Lana

Czech decathlete Jan Dolezal and US heptathlete Annie Kunz took top honours at the 32nd edition of the Multistars Trofeo Zerneri Acciai in Lana, the first meeting in the 2019 IAAF Combined Events Challenge, on a cold and windy Sunday (28).

Kunz clinched the women’s heptathlon with 5971 ahead of 18-year-old Kate O’Connor, who broke the senior Irish record with 5881.

Rosenberg stayed at the top of the overall standings after clocking 15.15 in the 110m hurdles, the first event of the day, but Dolezal ran 14.63 to reduce the gap to just 24 points between the pair. Jean Baptiste Nutte from Belgium sprinted to 14.59 to remain in third place ahead of Brugger and Adam Sebastian Helcelet. Yuma Maruyama clocked the fastest time with 14.43 (-1.4m/s).

Dolezal threw the discus to 45.78m to move up to first place in the overall standings ahead of Brugger and Rosenberg. The German managed 47.13m behind last year’s Multistars winner Martin Roe (47.26m).

A clearance of 4.75m in the pole vault was enough for Dolezal to maintain his overall lead, but Rosenberg closed the gap thanks to a vault of 4.85m. Germany’s Tim Nowak cleared the same height as Rosenberg to move into sixth place overall. Brugger and Roe, meanwhile, cleared 4.65m.

Dolezal threw 62.50m in the javelin, outperforming the likes of Roe, Nowak and Helcelet who have superior PBs. And with Rosenberg managing just 52.37m, it meant Dolezal extended his lead to 184 points with just the 1500m to go.

Behind Dolezal, Roe carried a small gap of six points over Rosenberg going into the final event. Helcelet followed in fourth place ahead of Brugger with just 48 points separating the chasing quartet.

Nowak kicked down the home straight to win the 1500m in 4:27.38, putting him in fifth place overall with 7884. Helcelet, meanwhile, stepped off the track during the first lap.

“I did not expect to set a PB,” said Dolezal. “I am really surprised. I am now looking forward to Götzis, where I am aiming to score the qualifying standard of 8200 for the World Championships in Doha.

“I am happy with my first release over the 15 metres in the shot put,” added Dolezal, who also set PBs in the 400m, javelin and 1500m this weekend.

While Rosenberg was unable to hold on to his overnight lead on the second day of the decathlon, day-one heptathlon leader Annie Kunz maintained pole position throughout day two.

The US athlete jumped 6.02m (1.4m/s) in the long jump to increase her lead to 30 points over compatriot Riley Cooks. Allison Reaser-Halverson held on to third place after jumping 6.02m. Jessica Taylor Jemmett from Great Britain, meanwhile, moved from ninth to fourth after her leap of 6.05m.

Ireland’s Kate O’Connor was the top performer in the javelin, setting a national U20 record of 49.31m to move from sixth to third place overall. Kunz retained her overall lead, though, throwing 43.41m to head into the 800m with a 98-point advantage.

“It was a good season opener,” said the 26-year-old. “It was just below my PB (6038) but my performance was a good accomplishment.”

O’Connor ran the 800m in 2:21.15 to finish second in the overall ranking with a senior Irish record of 5881, beating Cooks (5873). Reaser-Halverson scored 5789 completing a great weekend for the USA with three athletes in the top four.

“I did not expect this performance,” said O’Conner. “This weekend was cold but I’m used to this weather in my country. It would be amazing to win a medal at the European U20 Championships; that’s my goal for the year.”

Brazil’s Vanessa Chefer Spinola, the 2016 Multistars champion, rounded out the top five with 5676.

BACK
Pages related to this articleAthletes
Annie KUNZ 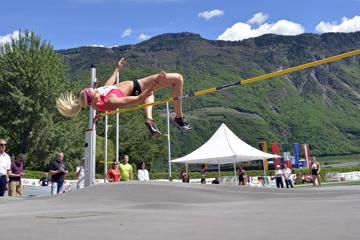 Rosenberg and Kunz lead overnight in Lana, He...