Despite feeling a bit fatigued, Kenya's Hellen Obiri was confident in the strength and duration of her kick at the IAAF Diamond League meeting in Eugene on Saturday (31).

That proved to be a pretty important weapon in her arsenal.

Running assertively in third place for most of the race, the 24-year-old surged over the final curve and sprinted to victory in a world-leading 3:57.05 to win the women's 1500m while establishing a US all-comers’ record at the 40th edition of the Prefontaine Classic, breaking her own mark of 3:58.58 established at this meeting last year.

“I came here looking to run faster than my personal best from last year, which was 3:58, so I am so happy," she said. "I like this stadium because it has been good to me. Last year I had a PB here. This year I had another PB here.”

Obiri also came here having exhausted herself overseas, first running an African record of 8:20.68 in the 3000m at the IAAF Diamond League opener in Doha on 9 May, then anchoring Kenya's 4x1500m to a world-record victory in 16:33.58 on 24 May at the IAAF World Relays in The Bahamas.

So rather than try to lead from start to finish, Obiri tucked in behind 2011 world champion Jenny Simpson and reigning world champion Abeba Aregawi of Sweden for most of the race. When pacemaker Phoebe Wright stepped off, leaving Simpson to do the work out front, Obiri bided her time before blasting into the lead around the final bend.

"My body was feeling tired when I was in The Bahamas because I had to work hard there just so we could break the world record," Obiri said. "Coming into this race, my coach and my manager told me not to push because the pace was going to be a hard 2:06. I tried to follow Aregawi because I knew she was a runner who is in good shape, and Jenny Simpson was there in the front. I knew I had a strong kick so I stayed there until 200 meters to go."

Aregawi tried to cover the move but was unable to close in on Obiri down the stretch. She finished second – ending a winning streak in the 1500m that dated back to August 2012 – in a season’s best of 3:57.57, pushing her leading total in the Diamond Race to six points. Faith Kipyegon, Obiri's Kenyan relay teammate, moved up a spot down the straight and finished third in 3:58.01. Simpson wound up finishing fourth in a personal best of 3:58.28.

Kirani James of Grenada and LaShawn Merritt of the US waged another classic battle in the men's 400m, with James holding off Merritt's attempts to move in front down the entire homestretch and dipping just ahead at the line in a world-leading 43.97. Merritt was awarded the same time as a photo finish was used to determine the outcome.

"The last 80 or 90 meters, you've always got to pay attention to where LaShawn is," said James, who has won six of 10 head-to-head meetings with Merritt. "He has a very strong finish. He's very experienced in the 400m so he has his tactics down to a T. He hardly makes a mistake in his races."

"It’s always going to be good when we line up," Merriitt added. "You’ve got two, strong, big guys who are professionals and love to go at it. I love to go at it, win, lose or draw. You win some. You lose some. Some are photo finishes. But it's all about giving the fans a good show and finishing up healthy."

Claye makes a huge jump back

A mere three months ago, USA’s Will Claye wasn't sure if he would even be able to compete this outdoor season after suffering a hamstring injury at the USA Indoor Championships in February. But the two-time Olympic medallist signalled an early return to form in the men's triple jump, winning with a personal best and meeting record mark of 17.66m.

"There’s so much I’ve been going through the past few months, not being able to jump, tearing my hamstring," Claye said. "It was exciting to be able to compete again and to compete here meant everything. I've been jumping here since I was 17. It feels like home to me. The crowd is always so supportive. Every time I wanted to start a clap, they’d clap with me. They were just so supportive."

USA’s Emma Coburn had clocked the previous fastest time in the world, 9:19.80, in her stunning win in Shanghai. Coburn was even faster in this race, lowering her personal best to 9:17.84 in a third-place finish. Hiwot Ayalew of Ethiopia was second in a season’s best of 9:12.89. Assefa leads Coburn, 6-5, in the Diamond Race standings.

USA’s Justin Gatlin joked that his teammates have been calling him Ricky Bobby, Will Ferrell's race driving character who always wanted to go fast in the movie Talladega Nights.

There may be some truth to the comparison as Gatlin once again lit things up in the men's 100m. The world leader blazed to another victory here in a wind-aided 9.76 (2.7m/s), finishing ahead of USA’s Mike Rodgers (9.80) and France's Jimmy Vicaut (9.89) while pushing his Diamond Race total to eight points.

"I don’t have to govern myself this year," Gatlin said. "I don’t have to wait to peak. There’s no World Championships or just one final, so I can go out there and run as fast as I want, when I want to run.” 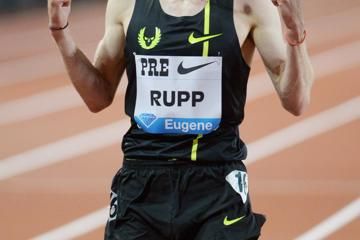