Fans of sporting thrillers were spoilt on the second leg of the IAAF World Indoor Tour as all of the sprint finals went down to the wire at the PSD Bank Meeting in Dusseldorf on Wednesday (1).

In the men’s 60m hurdles it looked as though the dominant French hurdlers were set to take the sweep, but late addition to the field Orlando Ortega was more than happy to spoil the party.

In a race that initially seemed as though Olympic bronze medallist Dimitri Bascou took the honours in a world-leading 7.51, the Spaniard snuck through in lane seven to be determined winner by photo finish in the same time as the Frenchman. Bascou, who dived over the line in an effort to secure victory, had to be wheeled off the track holding his hamstring in agony.

Garfield Darien in third was just 0.02 behind the two leaders, while Pascal Martinot-Lagarde, who clocked a then world-leading 7.54 in the heats, finished fourth in 7.62.

The women’s race was equally tight and proved a rematch of last year’s race when home favourite Cindy Roleder had to settle for second behind Belarusian Alina Talay by just 0.01.

In the heats, Talay laid down the gauntlet on her local rival when she equalled Roleder’s European lead of 7.97, while the latter finished third in her heat with 8.01. In the final the pair went head-to-head and with the support of the partisan crowd behind her, European champion Roleder took the win in a season’s best of 7.95 with Talay awarded the same time in second.

The photo finish theme continued over 60m, where Cuban Yunier Perez provided a surprise victory from lane eight, defeating Dusseldorf favourite and 2015 and 2016 winner Kim Collins, with both finishing with a season’s best of 6.56.

With all eyes on world indoor champion Barbara Pierre in the women’s 60m, Ukraine’s Olesya Povkh provided another upset. Povkh pipped Pierre to the victory by 0.01 in 7.16, with Britain’s Asha Philip finishing just behind the pair in 7.18.

Adam Kszczot was introduced as ‘Mr PSD Bank Meeting’ to the sell-out crowd and once again proved why he deserves his title. The Pole stormed to a world-leading 1:46.17 in the men’s 800m to take his sixth victory in Dusseldorf.

World indoor bronze medallist Erik Sowinski looked poised for second but was pipped on the line by Kenya’s Nicholas Kipkoech, who clocked a PB of 1:46.89.

Possibly inspired by her compatriot’s performance in the non-scoring men’s race, Joanna Jozwik ran a more tactical race than Kszczot, but with the same outcome.

Iceland’s Anita Hinriksdottir moved into the lead with one lap to go, but the Pole surged past the 2013 world U18 champion on the back straight and remained unchallenged for the final metres of the race to finish in a world-leading 2:00.91, securing 10 points in the tour rankings.

After Boston’s mile on Saturday, Dusseldorf featured the men’s 1500m as a World Indoor Tour event and it was Kenya versus the rest of the world. A lead pack of five quickly established with Germany’s Homiyu Tesfaye the only non-Kenyan in the mix.

With one lap to go, Bethwel Birgen and world silver medallist Elijah Manangoi dropped the rest of the field. In the end, Manangoi had just enough energy in reserve to out-sprint his compatriot over the final metres and take the win in a world-leading 3:37.62. Birgen finished in 3:37.81.

Morris continues where she left off in 2016

Sandi Morris didn’t hide the fact she was feeling confident going into the women’s pole vault, which was celebrating its debut at the PSD Bank Meeting. Her goals were clear: win, set a respectable meeting record and take the world lead. With a victory at 4.72m and the meeting record in the bag, she was poised to complete her to-do list.

Once the field had thinned down at 4.52m, Morris was the only athlete remaining when Switzerland’s Nicole Buchler bowed out after three failures at 4.62m. With little effort, the Olympic silver medallist cleared 4.62m and 4.72m on her first attempts. All three of Morris’s attempts at 4.82m, which would have been a world lead, looked promising, but the bar didn’t seem to want to stay up.

“I’m very happy with the result,” she insisted after the competition. “It is still very early in the season, so to be attempting a 4.80 height is really encouraging.”

In the women’s triple jump Portugal’s Patricia Mamona made it three wins out of three in 2017 to extend her lead in the World Indoor Tour rankings.

After victory in Boston at the weekend, the European champion’s second attempt of 14.11m sealed a narrow victory over Neele Eckhardt. The German improved her indoor PB by 26 centimetres to 14.09m and was visibly thrilled with her result and to secure the qualifying standard for the European Indoor Championships in March.

Heartache came for world indoor champion and world leader Yulimar Rojas, who suffered a hamstring injury on her second attempt.

With 2016 hampered by injury woes, world shot put champion Christina Schwanitz wasn’t quite sure what to expect from her season opener in Dusseldorf. But with every round the German grew in confidence and produced her best throw of the night with her final attempt.

It was, however, Hungary’s Anita Marton who took the win and 10 World Indoor Tour points, thanks to an 18.17m fifth-round throw. Schwanitz nevertheless allowed herself a little smile and will be heading back down the motorway tomorrow to continue her comeback at the Indoor Meeting Karlsruhe, the third leg of the IAAF World Indoor Tour.

A dominant figure on the indoor circuit, two-time world indoor 400m champion Pavel Maslak left no doubt over his form. The Czech ran a strong race from the outside lane to take the win and 10 tour points in 46.00. Grenada’s Bralon Taplin won the other heat in 46.25.

A whole host of athletes competing in Dusseldorf will make the journey south to Karlsruhe tomorrow to continue the pursuit of IAAF World Indoor Tour points on Saturday 4 February. 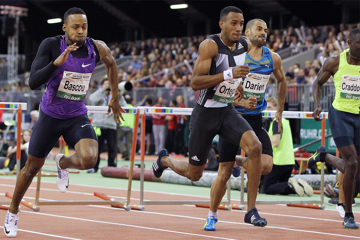 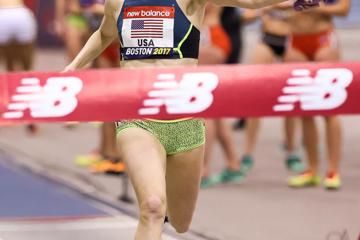