Henriques speeds to 45.03 400m among a plethora of ODESUR Games records

Brazil’s Anderson Henriques posted the best result of the second day of the ODESUR Games (South American Games) athletics programme by winning the 400m in a Games record of 45.03 on Friday (14).

The athletics competitions of the multi-sport games are taking place at Santiago de Chile’s National Stadium, the venue of the 2000 IAAF World Junior Championships.

The 22-year old from Porto Alegre, eighth at the 2013 IAAF World Championships triumphed after a close battle with teammate Hugo Balduino de Sousa, who finished second with a personal best of 45.09.

Henriques also came very close to improving his personal best of 44.95 that was set in the Moscow semi-finals.

He is only the second South American runner to have broken the 45 seconds barrier, but the Brazilian national record and Area record stands at a formidable 44.29 to his  compatriot Sanderlei Parrela, set when finishing second at the 1999 World Championships.

A champion is always a champion, and that’s perhaps what could be said after a surprising result in the long jump.

Saladino, now 31, who could not even qualify for the final in Sopot earlier this month but took control of the event after round three, when he jumped 7.99m to surpass da Silva’s 7.84m from round one.

The Panamanian went further in round four, landing at 8.16m (wind -0.5 metres-per-second) for a Games record and an outdoor world leading mark.

Da Silva improved to 7.88m but seemed like he was having an off day after his victory in Poland, in contrast to Uruguay’s Emiliano Lasa who posted a national record of 7.94m with his final jump to grab the silver medal.

Brazil’s Fabiana Murer was able to take care of business in the women’s pole vault, recording a victory with a Games record 4.40m. However, Murer - who jumped 4.70m for fourth place in Sopot – was struggling by her own standards and only cleared that height, her opener, at her third attempt. Later, she had three misses at 4.55m.

The second day of competition in Santiago was a historic one for Panama.

It was a huge haul when one considers that Panama had only won seven gold medal across all sports in the entire history of the ODESUR Games prior to this edition.

Another Colombian, Muriel Coneo, dominated the female 1500m with a comfortable victory in 4:15.66.

Peru’s Javier McFarlane, younger brother of Jorge McFarlane who won the 110m hurdles four years ago in the Colombian city of Medellin, kept the title in family hands with a personal best of 13.77 (0.5 mps), while Brazil’s Wagner Domingos won the hammer with 70.62m from round three.

Colombia’s María Alejandra Idrobo was the surprising winner of the 100m in 11.62 (-0.1 mps) just ahead of Ecuador’s Angela Tenorio in 11.64 and Brazil’s Franciela Krasucki, who set Area records indoors over 60m this winter but aho had to settle for third in 11.67.

Tenorio was a double medallist at the 2013 World Youth Championships, and is one of South America’s most promising athletes for the upcoming 2014 IAAF World Junior Championships in Eugene.

Geisa Coutinho, 32, provided Brazil’s fourth gold medal of the day with her triumph at 400m with a 51.81 clocking.

Flor Dennis Ruiz brought Colombia’s third victory on Friday by taking the Javelin with a personal best and Games record of 60.59m.

Brazilian athletes are in control of both combined events after their first day of the competitions.

Luiz Alberto de Araújo leads the decathlon with 4009 points, and a 30 points margin over Argentina’s Román Gastaldi. Tamara de Souza has an even narrower lead in the heptathlon with 3422 points from Paraguay’s Ana Camila Pirelli, who has collected 3405. 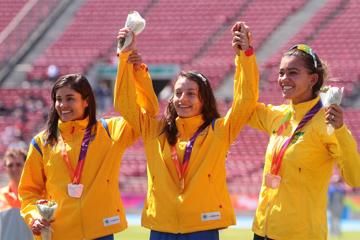