Dasaolu impresses at British Championships with 9.91 in 100m

The 2013 British Championships may have been missing the country’s three reigning Olympic champions, but the absence of Jessica Ennis-Hill, Mo Farah and Greg Rutherford from Birmingham was all but forgotten when James Dasaolu provided the biggest talking point of the event (12-14).

The European indoor 60m silver medallist had set three PBs this year in the 100m, so it was no surprise that he rewrote his lifetime best again. But the fact that his 9.91 clocking – the third-fastest time ever by a European athlete and just 0.04 behind the UK record – came in the semifinals caused a stir as spectators keenly anticipated what was to come in the final.

Dasaolu unfortunately skipped the final, the injury-prone sprinter taking extra caution to stay in one piece ahead of the World Championships. But the selection decisions were made more interesting when the top three finishers in the final all dipped under the ‘A’ standard.

Two of the closest contests of the weekend were the 400m Hurdles finals. As the reigning World champion, Dai Greene’s place on the British team for Moscow was secure, but he was out to defend his honour, having been beaten by European champion Rhys Williams at the recent Birmingham Diamond League.

Once again it was a fierce battle between the pair, but this time Greene triumphed in a season’s best of 48.66 as Williams was dragged through to a PB of 48.85. Richard Yates was third in 49.49.

In the women’s race, Shakes-Drayton was up against long-time rival Eilidh Child. As was the case in the men’s 100m final, the top three finishers all dipped under the ‘A’ standard to book their places on the team for Moscow.

Back to her best after a career-threaten injury several years ago, 2007 World youth champion Asha Philip continues to go from strength to strength. In Birmingham she sped to a lifetime best of 11.20 (-0.2m/s) to win the 100m by a significant margin.

Christine Ohuruogu, the 2008 Olympic champion, was a class apart in the 400m. Her winning performance of 50.98 equalled the time she ran when winning her first senior title back in 2004.

Shana Cox finished second in a season’s best of 51.76 with Margaret Adeoye clocking a PB of 51.93 in third. The following day, Ohuruogu ran in the first round of the 200m, winning her heat in a wind-assisted 23.30, but she just used it as an opportunity to sharpen up, choosing to skip the final.

Grabarz and Proctor best of the jumpers

Olympic bronze medallist Robbie Grabarz enjoyed a clean card in the High Jump, sailing over all of his heights on his first attempt, up to his winning mark of 2.28m. At that point, former Olympic finalist Tom Parsons exited the competition with a best mark of 2.25m.

Grabarz went on to attempt 2.33m, but missed three times.

Several other events saw athletes secure their place on the British team for the World Championships in Moscow, as titles were won by athletes who already possessed the ‘A’ standard.

World indoor silver medallist Tiffany Porter won the 100m Hurdles in 12.68, while Nigel Levine achieved the ‘A’ standard en route to winning the 400m in 45.23.

James Ellington won a hotly-contested 200m final, clocking a wind-aided 20.45 (2.4m/s) to hold off Richard Kilty, second in 20.50, and World junior champion Delano Williams. The former Turks & Caicos sprinter got off to a bad start but recovered to get on the podium with 20.58.

Elsewhere, Marilyn Okoro adopted slightly different tactics to the ones she is used to, winning the 800m convincingly from teenage talent Jessica Judd in negative splits. After a 61.88 opening lap from Judd, Okoro sped past her to win in 2:00.60 as Judd finished second in 2:02.81. 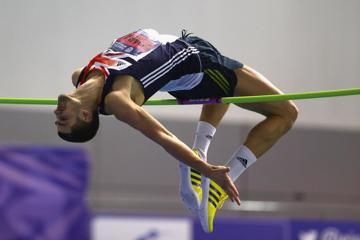 Grabarz and Bleasdale grab the limelight at U...