James Kibet and Lilian Rengeruk claimed a Kenyan double at the 61st edition of Campaccio on a rainy and cold day at the IAAF Cross Country Permit meeting in San Giorgio su Legnano.

At about the six-kilometre point, Crippa tried to push at the front together with Kibet, Deriba Abdi and Ande.

With 20 minutes on the clock, Ande forced the pace on the fourth lap and broke down the lead pack to six athletes.

The race went down to the wire with a sprint for the final 300 metres. Kibet and Tesfaye broke away from Chelimo and battled it out for the win with Kibet eventually getting the victory in 29:34, the same time as Tesfaye. Chelimo finished third in 29:38, beating Ande by two seconds.

“I did not think about winning the race but it was my dream to follow in the footsteps of the big stars who have won here in the past, like Paul Tergat and Haile Gebrselassie,” said Kibet, who set a 5000m PB of 13:11.88 at the IAAF World Challenge meeting in Berlin last September.

“I followed my plan and stayed in the group before pulling away on the final lap,” added Kibet, who will now turn his attention to trying to qualify for Kenya’s team for the Commonwealth Games.

In sixth place, Yeman Crippa was the first European runner in 29:51, beating Moen by nine seconds.

Tirop then set the pace, going through the second lap in 9:48 while being closely followed by Rengeruk and Obiri.

When Tirop broke away on the final lap, Rengeruk was the only runner to keep up with her. Obiri, the defending champion, started to struggle in third place and was dropped.

Rengeruk and Tirop battled it out in the final sprint with 300 metres to go. Tirop took the lead in the back straight at the entrance of the Angelo Alberti athletics track but Rengeruk launched a kick to overtake her compatriot in the final straight, crossing the finish-line first in 19:02 to hold off Tirop by one second. Gete Alemayehu took a surprising third place in 19:23, beating Obiri by five seconds.

Rengeruk will compete at the IAAF Cross Country Permit races in Elgoibar and Seville later this month before attempting to qualify for Kenya’s 5000m team for the Commonwealth Games. 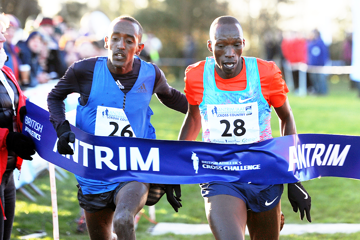