Statisticians A Lennart Julin and Mirko Jalava look back on the best throwing performances of the year.

Together they compiled the top 13 marks outdoors, seven of which belonged to Kovacs. Despite being one year younger, Storl possessed the international experience proven by two golds and three silvers at global championships while Kovacs made his championship debut in Beijing.

In terms of distances, Kovacs had the upper hand with four marks beyond 22 metres while Storl had one such throw, but the latter won two of their three encounters before the World Championships. That, in addition to Storl’s proven ability to perform at his best at championships, made the double world champion a slight favourite going into Beijing.

In the end, newcomer Kovacs prevailed by 19 centimetres with his winning throw of 21.93m, but it wasn’t a two-way competition. During the fourth round, Storl was down in third place and Kovacs was fourth behind Jamaica’s O’Dayne Richards and New Zealand’s Tom Walsh.

Richards and Walsh illustrate a trend that cracks are emerging in the old monopoly of the USA and northern Europe. More and more nations are developing throwers who approach and even surpass the 21-metre line.

Statistically speaking, the USA is still by far the best nation with six of the world’s top 12 throwers in 2015. But Kovacs and super veteran Reese Hoffa were the only two of the four US shot putters in Beijing to finish in the top 10.

This event has been almost synonymous with the name Robert Harting for quite some years but a serious knee injury kept him sidelined for the whole of 2015.

In Harting’s absence, Piotr Malachowski – who for years had been Harting’s main challenger – took over as the number one discus thrower, winning his first ever global title at 32, following three previous silvers.

That championships are something special is also clearly illustrated by a comparison of the world list coming into Beijing with the actual outcome in the Bird’s Nest stadium.

World leader Malachowski lived up to expectations in Beijing but the second, fourth and fifth-ranked athletes on the world list didn’t even qualify for the final.

There was also a group of global championship debutants, born between 1991 and 1994, who proved to be much better than many of their more experienced colleagues in handling the pressure; something that bodes well for their future careers.

Belgium’s Philip Milanov, coming off a couple of strong IAAF Diamond League showings, grabbed the silver after setting a PB of 66.90m in the final, Sweden’s Daniel Stahl finished fifth with a season’s best, Jamaica’s Fedrick Dacres was one of only two automatic qualifiers and ended up seventh in the final while Colombia’s Maurizio Ortega finished 11th.

The process has been gradual over the past few years but in 2015 Pawel Fajdek unquestionably replaced Krisztian Pars as the number one hammer thrower in the world.

While Fajdek won the world title in 2013, Pars had the superior seasonal record that year. In 2014 they were fairly evenly matched with Pars claiming the big titles.

But this year Fajdek perfected his consistency and raised his level another notch.

Following an early loss in his season debut, he went on to win the rest of his competitions in 2015, throwing beyond 80 metres in 12 of those. He ended the year with an 8-1 head-to-head record against Pars and won the world title in convincing fashion while Pars had to be content with fourth place.

Somewhat surprisingly, no German was entered for the event in Beijing while 22-year-old Briton Nick Miller – in his first ever global championship – was the only man besides Fajdek to achieve an automatic qualifier in the preliminary round.

Europe still provides the bulk of the leading throwers but the globalising trend – which started in 2012 with Keshorn Walcott’s surprise Olympic gold for Trinidad and Tobago – is growing.

This year it manifested itself emphatically in Beijing with the gold going to Kenya through Julius Yego and the silver to Egypt through Ihab Abderahman.

While Walcott’s winning distance in London was the shortest in a global championship since 1988, the situation in Beijing was quite the opposite.

Yego’s winning throw of 92.72m was an African record and moved him to third on the world all-time list. It was also the eighth-best performance ever, the second longest in a championship and the best in the world in 14 years.

He may not be the most consistent of throwers, but Yego still had three more meetings beyond 86 metres, including a 91.39m throw at the IAAF Diamond League meeting in Birmingham in early June.

Eight years after becoming world champion, a rejuvenated Tero Pitkamaki compiled seven meetings between 87 and 89 metres, including a third-place finish in Beijing and victory at the IAAF Diamond League final.

Germany’s Thomas Rohler has been steadily improving in recent years. This season, at age 24, he reached fourth place in Beijing with a series which contained five throws between 86.03m and 87.41m.

This season marked the end of an era in the women’s shot put.

Valerie Adams, winner of the past two Olympic titles and four world titles, could not compete in Beijing. The Kiwi athlete tried to come back after operations on her shoulder and elbow, but was not ready to defend her title in Beijing.

Germany’s Christina Schwanitz, the silver medallist behind Adams in Moscow, seized the opportunity to become a clear world number one this season.

The 29-year-old suffered just two losses all year, both to China’s Gong Lijiao, but won the rest of her 15 finals for an impressive summer. Schwanitz took the world lead in Beijing in May with a 20.77m toss, which lasted until the end of the season.

The World Championships was a close competition against Gong. The 26-year-old had already won the Olympic bronze in 2012 and two World Championships bronzes in 2009 and 2013, but of course was going for the gold in front of her home crowd. Gong took the lead with her first throw of 20.30m, the third-best mark of her career, but the German grabbed her first major win in round three, tossing 20.37m. Gong also came close in the same round, 20.25m, ending up with her best career achievement, World Championships silver. USA’s Michelle Carter won her first global senior outdoor medal in third with 19.76m.

For the first time in 13 years, there were two 70-metre throwers during the same season in the women’s discus. The last time this happened was back in 1992, when Cuba’s Maritza Marten and Germany’s Ilke Wyludda threw 70.68m and 70.96m respectively.

World and Olympic champion Sandra Perkovic won the National Winter Throws in Split with 70.08m, the fourth 70-metre throw of her career. Three months later, Denia Caballero continued her rapid progress with a world-leading 70.65m throw in Bilbao. It was her third PB of the year, following marks of 67.87m and 69.51m in May.

Croatia’s Perkovic was in great form, winning seven out of eight competitions before Beijing. The only defeat was handed to her by a Cuban, but surprisingly it was Yaimi Perez. She won the IAAF Diamond League meeting in Lausanne with a 67.13m personal best against Perkovic’s 67.06m with Caballero taking third place.

But in Beijing, Caballero killed the competition with her first throw, sending her discus out to 69.28m. Perkovic struggled with her technique but finally managed 67.39m in the final round to take silver.

Germany’s Nadine Muller was third with 65.53m, her third straight top-four finish in the top four at the World Championships. Perez narrowly missed a medal, finishing seven centimetres behind Muller.

Perkovic rebounded with two good wins after Beijing, throwing 69.88m in Zagreb and 67.50m in Brussels.

Anita Wlodarczyk was back to her best in 2015, winning all 11 of her competitions.

The 30-year-old, who returned to the top of the podium last year when winning the European title, set a world record of 79.58m in August 2014.

The Pole’s last defeat dates back to June 2014, when Germany’s Betty Heidler beat her in Ostrava. But this season the 2007 world champion was nowhere near capable of challenging Wlodarczyk.

A 77.73m throw at the IAAF World Challenge meeting in Beijing and then a 78.28m world lead at the European Team Championships in Cheboksary were just a prelude. She threw 79.83m, farther than the world record, in an exhibition competition in Wroclaw, but it did not count for record purposes.

She didn’t have to wait much longer though. In Cetniewo, at the Kamila Skolimowska Memorial, her second throw landed at 81.08m, the first time any woman had thrown beyond 80 metres.

Wlodarczyk led from her first throw at the IAAF World Championships Beijing 2015. In rounds three and four, she produced the second and third 80-metre marks in history, throwing 80.27m and 80.85m. Although she just missed out on breaking her own world record, she had done more than enough to win her second world title, six years after her first.

To the delight of the home crowd, Zhang Wenxiu took the silver in Beijing – her best achievement to date, following three bronze medals – with 76.33m.

France’s Alexandra Tavernier, the breakthrough hammer thrower of the year, took the bronze with 74.02m in her first senior global championships.

The usual suspects – such as world record-holder and double Olympic champion Barbora Spotakova, 2011 world champion Mariya Abakumova and 2013 world champion Christina Obergfoll – were all at the IAAF World Championships, but their results earlier in the season were far from convincing.

The field was open for anyone to take the gold medal.

South Africa’s 2011 world bronze medallist Sunette Viljoen was the early world leader with 66.62m in Melbourne in March where Australia’s Kim Mickle placed a close second with 66.57m. But no thrower could be considered a clear favourite before Beijing; the winners were changing from one competition to the next.

In Beijing, thanks to a huge roar from the home fans, Chinese athletes had a 1-2 lead after round one. Asian record-holder Li Lingwei led with 64.10m with Lu Huihui in second place with 63.80m. Viljoen then came up big with a 65.79m leader in the fourth round before Lu made the breakthrough with her javelin landing at 66.13m, adding more than a metre to the Asian record.

But there was still one more twist to come as Germany’s Katharina Molitor moved from third to first with her last throw, taking the win and her first major medal. The 32-year-old’s winning mark of 67.69m was 1.39m farther than her previous best from Luzern in July.

Obergfoll was fourth with 64.61m while Spotakova could not make the final three rounds, finishing ninth with 60.08m. Abakumova was not close to making the final, finishing just 30th in qualification with 56.08m. 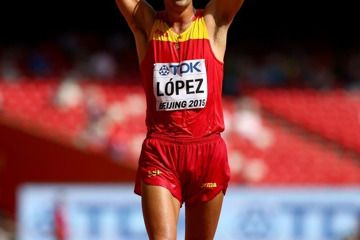 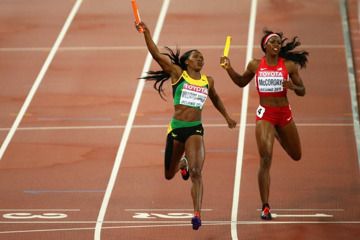 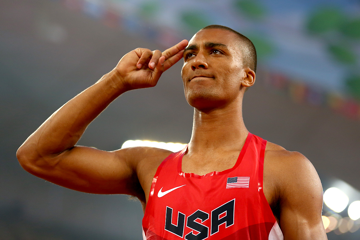