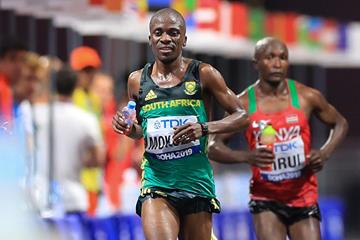 Athletics South Africa has selected a full team for the World Athletics Half Marathon Championships Gdynia 2020, which will take place on 29 March.

The team is led by national record-holder Stephen Mokoka, who clocked 59:51 in Buenos Aires last year before going on the finish fifth in the marathon at the World Championships in Doha. The 35-year-old will be making his seventh appearance at the World Half Marathon Championships, a tally bettered by just two other men in the history of the event. His best placing to date is eighth, a finish he achieved in both 2009 and 2012.

He will be joined by Precious Mashele, who has a best of 1:00:28, marathon specialist Desmond Mokgobu, Joel Mmone and Mbuleli Mathanga.

The five-member women’s team is spearheaded by Glenrose Xaba, who will make her World Athletics Half Marathon Championships debut after clocking 1:09:46 last year in her second ever race at the distance.

She will line up alongside ultra-distance runner Gerda Steyn as well as Jenet Mbhele and twin sisters Lebo Phalula and Lebogang Phalula-Luthuli.

“We have now selected our best possible team,” said ASA president Aleck Skhosana. “It is a team that carries a lot of hopes on their individual shoulders.”