Spain's Maria Vicente and Norway's Martin Roe took the honours at the 34th edition of the Multistars in Lana, the opening leg of the 2021 World Athletics Challenge – Combined Events.

Vicente improved her own national record to 6304 points to win the heptathlon, bettering the previous mark of 6115 that she set in 2019 when winning European U20 gold in Boras.

The 2021 edition of the Multistars was also highlighted by the national records set by Ireland's Kate O'Connor, who finished second with 6297 points, and Marthe Koala from Burkina Faso, who placed third with 6238 points.

Roe won the decathlon with 8055 points, taking the Multistars title for the second time in his career. The Norwegian won the Italian meeting in Florence in 2018 with a national record of 8228 points.

On the second day of competition, Koala won the long jump as she leapt 6.42m twice in the second and third rounds, beating Vicente, who missed her PB by eight centimetres with 6.41m in the third round. Britain's overnight leader Holly Mills jumped 6.15m in the third round and kept her leading position with 4734, 27 points ahead of Koala and 91 ahead of Vicente.

The javelin produced a major shake-up to the overall standings. Mari Klaup from Estonia was the top performer with 54.18m after two fouls. Koala improved her PB to 46.08m to take the overall lead and Vicente also set a lifetime best of 47.83m to move from third to second. O’Connor, who won the Irish javelin title last year, threw over the 51m barrier twice with 51.61m and 51.26m to move into third place. Mills threw 30.93m to drop to fifth place.

"When I came here, I never thought that I could break the national record," said Vicente. "I improved my javelin throw PB by three metres. This was the highlight of my competition this weekend.

"My goal is to qualify for the Olympic Games. My next competition is the combined events meeting in Arona. This year I am focusing on the heptathlon, but I could return to triple jump next year."

O’Connor repeated her second place from the 2019 edition of the Multistars when she scored 5881 points. Later that year the Irish athlete won European U20 silver in Boras.

"It was my first competition in two years," said O’Connor. "I came here just to see where my form was. I love this meeting and the people here. I finished second twice. Maybe I will win next time. I have two competitions lined up and my big goal is a medal at the European U23 Championships next July."

European indoor silver medallist Jorge Urena clocked the fastest time in the 110m hurdles with 14.40 into a headwind of 1.3m/s to move into first place in the overall rankings with 5034 points, 79 points ahead of overnight leader Roe who clocked 15.40. Italian decathlon champion Dario Dester missed his 110m hurdles PB by just 0.03 with 14.40 with a tailwind of 0.7m/s and closed his gap on Roe to just two points in third place.

Former world U20 champion Jiri Sykora from Czech Republic won the discus throw with 47.60m and produced two more throws over the 47m barrier with 47.53m and 47.17m. His compatriot Adam Sebastian Helcelet finished second with 47.49m ahead of Roe (46.86m), who regained the overall lead with 5760 points, 15 ahead of Helcelet. Pablo Trescoli from Spain moved up from fifth to third place after throwing the discus to 43.95m in the first round. Trescoli’s compatriot Urena faded to fourth after producing a best effort of 34.96m, while Dester rounded out the top five after throwing the discus 38.48m in the third round.

Roe retained his leading position after improving his pole vault PB by 5cm to 4.85m, extending his advantage to 46 points over Helcelet, who vaulted 4.75m. Dester cleared 4.75m at the third time of asking and 4.85m on his second attempt to move into third place ahead of Fredrick Samuelson from Sweden and Niels Pittomvil from Belgium. Benjamin Hougardy from Belgium improved his overall ranking from eleventh to sixth after winning the pole vault with a PB of 4.95m.

France's Romain Martin won the javelin with a PB of 68.61m ahead of Helcelet (66.62m) and Roe (65.14m), who carried a margin of 23 points over Helcelet going into the final event. Fredrick Samuelson threw the javelin 62.01m to move from fourth to third and Dester set a javelin PB with 54.97m.

Roe ran 4:50.56 for the 1500m to bring his winning tally to 8055 points. The Norwegian prevailed by a margin of 30 points over Helcelet as Samuelson finished third with 7815 ahead of Dester, who smashed his PB with 7758 and beat Trescoli, who finished fifth with 7752.

"I did not expect this score," said Roe. "I had a long break from competitions. I tried to prepare for the indoor season, but I picked up a back injury.

"This win means a lot for me because I won the Multistars in 2018, setting the national record. I love competing at this meeting."

BACK
Pages related to this articleAthletes
Martin ROE 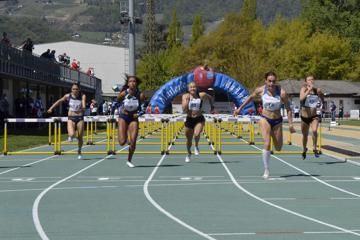 Mills and Roe lead from start to finish on fi...