Kasyanov and Broersen return to defend their titles in Talence

Oleksiy Kasyanov and Nadine Broersen face a difficult task in their attempt to retain their titles at the 41st edition of the Decastar, the last fixture of this year’s IAAF Combined Events Challenge, on Saturday and Sunday (16-27) in Talence, in the outskirts of Bordeaux.

Although recently-minted world champion Kevin Mayer of France won’t compete, he will be present in Talence and may contest the pole vault event on Sunday as a guest.

His absence in the decathlon creates opportunities for other contenders. The men’s field will feature five of the first 10 finishers from last month’s IAAF World Championships London 2017.

Kai Kazmirek appears to be the favourite following his London bronze medal with 8488, the second best tally of his career. Sixth at the 2015 World Championships and at the foot of the podium the following year at the Olympics Games where he scored his personal best of 8580, the 26-year-old German has shown his consistency at the top level.

Kazmirek, who will be competing for the first time at the Decastar, will be aiming to retain the IAAF Combined Events Challenge title he won last year, as well as the US $30,000 first place prize.

To do so however he’ll need to score a personal best of 8626 or more to overtake his countryman Rico Freimuth, the current leader of the challenge standings.

Damian Warner, who stands just 67 points behind Kazmirek in this year’s challenge, could also take the overall challenge prize but he’ll have to tally 8692, a score just shy of the 8695 lifetime best that propelled the Canadian to silver at the World Championships in Beijing two years ago. Last year in Rio he beat Kazmirek by 86 points to take the Olympic bronze medal. Warner was the Decastar champion in 2013 and prevailed in Götzis back in May but finished fifth in London.

Also competing is Ukraine’s Oleksiy Kasyanov, the defending champion. The 32-year-old finished sixth in London, his second best result at the World Championships after his fourth place showing in 2009. He was also fifth at the 2014 World Indoor Championships.

With 41 decathlons to his credit, he’s the most experienced athlete of the field and could lean on that to retain his title, and especially to handle the very demanding streak of two decathlons in a one-month span. Kasyanov has finished runner-up three times at Decastar, in 2012, 2014 and 2015.

Not to be discounted either are Grenada’s Kurt Felix and Czech’s Adam Sebastian Helcelet, seventh and eighth respectively in London. The former, 29, scored a PB of 8509 in Ratingen this year where he was runner-up while the latter improved his best to 8335 in Götzis.

The field also includes Eelco Sintnicolaas, who is looking for redemption after failing to finish at the World Championships when he had withdrew before the pole vault.

His compatriot Pieter Braun, who also set a personal best of 8334 in Götzis, will also be a man to watch. He was 16th in London.

Rodriguez and Vetter the heptathlon favourites

On the women’s side, Yorgelis Rodriguez will be attempting to move up from her second place showing last year.

Although setting a new national record of 6594 the 22-year-old finished 42 points shy of the podium one month ago in London.

Rodriguez’s main opponent should be Anouk Vetter, who was third in Talence in 2015. The 24-year-old finished ahead of the Cuban to take bronze in London where she improved the Dutch record to 6636 points.

Both Vetter and Rodriguez will have the Challenge title in their sights. Vetter currently stands 93 points ahead of Rodriguez.

Although German Carolin Schäfer appears to have the Challenge title secured –Vetter would need to score 7066 or higher and Rodriguez 7159 or more to overtake the current leader while world champion Naffissatou Thiam won’t compete in Talence-- the duo will battle for the challenge’s second place and the US $20,000 that comes with it.

Nadine Broersen, the defending champion, will be looking to end the season on a high note after failing to finish both in Götzis and then at the World Championships in London.

Likewise, 2012 Decastar winner and two-time European champion Antoinette Nana Djimou will be aiming to bounce back after disappointment in London where the Frenchwoman had to settle for 16th.

The field also includes Xénia Krizsan of Hungary, sixth in the past three editions in Talence. She was ninth in London with 6356 points, just 33 points shy of her PB set in Götzis in May.

BACK
Pages related to this articleAthletes
Oleksiy KASYANOV 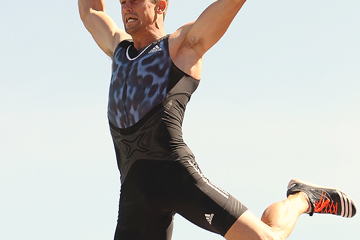 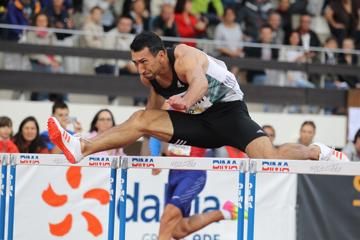