With Croatia’s current pandemic restrictions limiting attendance to just 700 spectators and fields impacted by travel restrictions, the meeting wasn’t quite the 70th anniversary celebration organisers had planned, but several performances exceeded expectations to contribute to another memorable evening at the Sportpar Mladost.

Discus victories for Stahl and Perkovic

Stahl, the world discus champion, returned to his winning ways in fine style, throwing 68.87m in the second round to add 70cm to the meeting record set by Fedrick Dacres two years ago. The Swede also reached 67.55m in the third round and 67.16m in the fifth.

Andrius Gudzius, the 2017 world champion who ended Stahl's unbeaten streak at 15 in Berlin on Sunday, was second with 68.22m, his third best throw of the season.

"It was a great battle today," said Stahl, the world leader at 71.37m. "This has been a great season even though it was a complicated season - I competed even more this year than last. Next year is an Olympic year and I'm really looking forward to that one.

On the women's side, Sandra Perkovic made the most of her first competition since March, dominating the proceedings with a 64.67m effort to beat Frenchwoman Melina Robert-Michon (60.65m) by more than four metres.

Another Swede, long jumper Khaddi Sagnia, pieced together the finest performance of her career and even threatened the seven-metre barrier.

Opening with 6.61m leap, the 26-year-old equalled her 6.83m outdoor career best in the third round. With the victory secured, she sailed 6.92m on her final leap to equal the absolute best she set at the 2018 World Indoor Tour meeting in Glasgow.

Alina Rotaru of Romania was second at 6.69m with Serbia's Milica Gardasevic third at 6.60m, season's bests for both.

Rowden and McSweyn impress on the track

Rowden and McSweyn produced the most impressive performances on the track with commanding victories in the 800m and 1500m, respectively.

After a 50.39 opening lap, Swede Andreas Kramer took control of the 800m, pushing the tempo to take a two-metre lead as he entered the final turn. But Rowden ate up the gap quickly before making his decisive move just after Kramer entered the final straight. Rowden broke away to finish unchallenged in 1:44.09, a big personal best that fell a scant 0.01 shy of Nijel Amos's two-year-old meeting record.

"It was a great field, and it's great to come out on top," said Rowden, who arrived in Zagreb with a 1:44.74 lifetime best set just 18 days ago in Gothenburg. Ten days ago he raced to his first national title.

Running wide on the outside, Elliot Giles and Jake Wightman finished strong, gliding by US rising star Bryce Hoppel to finish second and third in 1:44.75 and 1:44.85 to round out a British 1-2-3.

McSweyn was even more convincing in the 1500m about 40 minutes earlier.

Running behind pacesetter Azzedine Habz from the outset, the Australian quickly gapped the field to take firm control when the Frenchman stepped aside with just over a lap and a half to go. He poured it on over the last lap, covering the final circuit in about 57 seconds en route to a 3:32.17 performance, the ninth fastest in the world this year, and the fourth fastest by the 25-year-old.

James West of Great Britain was second in 3:34.56, a lifetime best. Australian Matthew Ramsden was third in 3:34.83 with Elzan Bibic of Serbia fourth in 3:35.07, personal bests for both as well.

Wilhem Belocian took a narrow victory in the 110m hurdles, the meeting's signature event, edging Freddie Crittenden of the US in 13.32m. Belocian, who raced to the French title in Albi on Sunday, chiseled his way to a clear lead by the midway point and valiantly defended his ground to prevail by 0.02.

On the women's side, Payton Chadwick of the US closed well to take a come-from-behind 13.01 win in the 100m hurdles, reeling in Cindy Ofili of Great Britain, who was second in 13.10.

Elsewhere, Ukraine’s Yuliya Levchenko won the high jump at 1.93m before topping out with three tries at 2.00m. Erika Kinsey of Sweden and Australia's Nicola McDermott produced identical score cards to tie for second at 1.90m.

Marko Ceko of Croatia won the long jump with a third round leap of 7.92m. 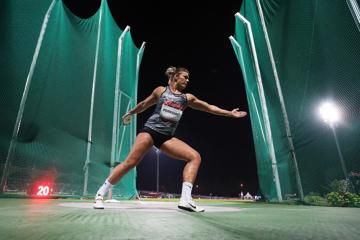 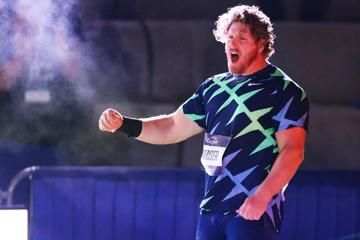