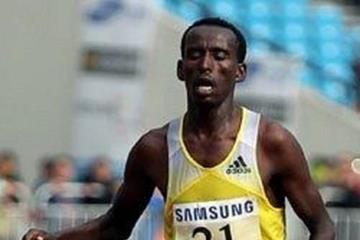 Jarso smashes personal best with 2:06:17 to win in Seoul

Ethiopia’s Yacob Jarso, who was fourth over the barriers in the 2008 Olympic Games 3000m steeplechase, won the Seoul International Marathon in huge personal best of 2:06:17 on Sunday (16).

Jarso took almost five minutes off his previous best when winning the IAAF Gold Label Road Race in the Korean capital, the first ever Ethiopian men’s winner at the famous race which can trace its history back to 1931.

Ten runners, led by Jarso, went through the halfway point in 1:03:23, just outside the pace needed to challenge the course record 2:05:37 set by Kenya’s Wilson Loyanae in 2012.

The pack was still together at 30km, including Kenya’s Stephen Chemlany, James Kwambai and Gilbert Kirwa as well as the Ethiopian trio of Jarso, Tariku Jufar and Abraham Cherkos, as that checkpoint was reached in exactly 1:30:00.

The crucial move came just after 35km, reached in 1:45:05 with the leading group headed by Kirwa, when Jaros and Chemlany started to surge and one by one the other main protagonists dropped away.

The leading pair had a lead of eight seconds at 40km over Kirwa, with Jufar still just about on his shoulder. Cherkos was struggling to keep in contact and was another 20 metres in arrears while Kwambai now was a solitary sixth and another 80 metres further back.

With just under two kilometres to go, Jarso attacked again and although Chemlany never threw in the towel, he didn’t have enough left in the tank to challenge his opponent in the final stages of the race.

In women’s race, Kenya’s Helah Kiprop won in a personal best of 2:27:29, a 33-second improvement from when she finished fourth at last year’s Berlin Marathon.

Kiprop was together with Ethiopia’s Ashu Kasim at 40km but, in similar fashion to men’s winner Jarso and almost at exactly the same point, pushed hard with just under two kilometres to go and left her main rival trailing in her wake.

Kasim finished second in 2:27:45. The leaders went through the halfway point in a quick 1:13:16 but the pace started to slow between 25km and 35km and a group of five was still more-or-less together as that checkpoint was reached in 2:02:44.

However, Kiprop and Kasim were started to slowly crank up the pace and soon the women’s race turned into a head-to-head duel.