Russian athletes dominated the track and field programme at the sixth edition of the CISM World Military Games which were staged in Mungyeong, South Korea, and concluded on Thursday (8).

Russia claimed a total of 19 medals, 10 of which were gold. Among the high-profile names to contribute to this tally were recently crowned world champions Sergey Shubenkov and Mariya Kuchina, who both showed fine form at the end of an unusually long outdoor campaign.

Kuchina’s win in the high jump was just as clear-cut. The world indoor and outdoor champion cleared 1.95m to defeat Ukraine’s Iryna Herashchenko, one of Kuchina’s rivals from her junior days, by 11 centimetres before three unsuccessful attempts at a would-be lifetime best and championship record of 2.02m.

Ekaterina Koneva had high hopes of challenging Colombia’s Caterine Ibarguen for the world triple jump title six weeks ago but an untimely stomach bug left the Russian performing below her normal level.

The world indoor champion was able to end her season on a better note with victory with 14.28m before winning the long jump two days later with 6.39m ahead of specialists Volha Sudareva from Belarus (6.36m) and Alina Rotaru from Romania (6.33m).

Malachowski was close to leaving Mungyeong empty handed as the world discus champion found himself down in sixth after five throws but the Pole elevated himself into the silver medal position with his final throw of 62.12m. This mark didn’t threaten the lead of Hungarian veteran Zoltan Kovago, who claimed the title with his second-round throw of 66.01m.

Malachowski’s team-mate Pawel Wojciechowski, the 2011 world champion, was highly fancied to claim the pole vault title but the 26-year-old only managed a 5.20m clearance for bronze. The hosts claimed their only title from the athletics programme in this discipline courtesy of Jin Min-Sub, who sealed the title with a third-time clearance at 5.40m.

Naser claims one of six titles for Bahrain

Bahrain finished second to Russia on the medals table with six gold medals. One of those titles was won by world youth champion Salwa Eid Naser.

The 17-year-old lowered her lifetime best to 51.39 to defeat Romania’s Bianca Razor (51.81), Ukraine’s Nataliya Pyhyda (51.99) and 2013 world bronze medallist Antonina Krivoshapka (53.03), who was competing individually for the first time since the birth of her daughter last July.

Other noteworthy performances from the Bahraini team included Ruth Jebet winning the steeplechase in 9:30.34, Kemi Adekoya winning the 400m hurdles in 55.30 and 31-year-old El Hassan El Abbassi taking a solo win in the 10,000m in a championship record of 27:41.76.

Zhang makes it four on the bounce

Since the women’s hammer was incorporated into the programme in 2003, the event has been dominated solely by Zhang Wenxiu. 12 years after winning this title aged 17, the world silver medallist claimed an unprecedented fourth gold medal on the trot in Mungyeong.

Any four of her valid throws would have easily beaten the rest of the competition. Zhang improved her championship record to 74.87m in the fourth round which she backed up with a 74.68m throw in the final round.

The Chinese women dominated the throws with Gao Yang winning the shot put with 18.14m, Feng Bin winning the discus with a PB of 62.07m and Zhang Li winning the javelin with 62.95m. 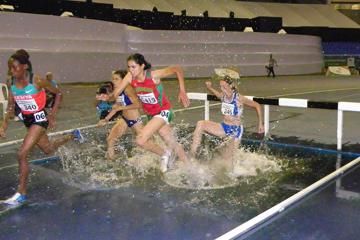 Strong showing by Kenya at the World Military...