Uganda may have dominated the medal table but the star of the show at the the 30th edition of the World Mountain Running Championships was Austria’s Andrea Mayr who became the first runner to clinch five world titles in the discipline when she won in Casette di Massa, Italy, on Sunday (14).

Mayr dominated the race from the gun and won over the 8.4km course in 45:07, with a gap of 2:42 back to her the next rival, Kenya’s Lucy Murigi Wambui, to become the most successful runner in the history of the event.

The 34-year-old medicine graduate celebrated her triumph with a dance on the podium.

However, Italy triumphed in the women’s team competition with 32 points with Great Britain second (41) and the USA third (63).

In the men’s senior race over 11.7km, Uganda claimed a podium sweep. Isaac Kiprop took the honours, crossing the line in 53:50. His compatriot Daniel Rotich finished second well over a minute behind with 55:10 while Kibet Soyekwo completed the Ugandan triumph in third place with 55:24.

Uganda inevitably dominated this team contest with 17 points ahead of Eritrea (27) and Italy (55).

Phillip Kipyeko, who finished sixth in the 5000m at the IAAF World Junior Championships in July, showed his excellent climbing ability over the steep paths winding up through the white marble walls of the Cava di Gioia to win over 8.4km 40:51.

Turkey’s Ramazan Karagoz finished a distant second in 42:42, just ahead of his compatriot Ferhait Bozkurt who was third in 42:53.

The Turkish pair stood on the podium again shortly after they had received their individual medals to take the team gold after tallying just 12 points. Hosts Italy, who had won the European junior team title earlier this summer, this time took the silver medals with 34 poits while Great Britain completed the team podium in third place with 47 points.

Uganda’s Stella Chesang, fourth at the IAAF World Junior Championships 5000m, started off Uganda’s successful day when she took the junior women’s crown over 3.8km in 19:23. Sarah Kistner from Germany was more than a minute adrift when finishing second in 20:38 while Czech Republic’s Michaela Stranska was third with 21:01.

Germany won the women’s team title with just eight points to beat the USA, second with 12 points and led home by world junior champìon Mandy Ortiz, who was fourth in 21:23. Czech Repuplic also totalled 12 points but had to settle for the bronze medals under the tie-break rules. 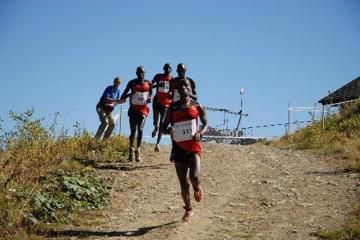 Kiplimo and Gaggi take the top honours at the...