World indoor champion Samuel Tefera clocked a 3:35.57 world lead in the 1500m to highlight the Orlen Copernicus Cup in Torun, Poland, the third stop on the 2019 IAAF World Indoor Tour, on Wednesday (6).

Running on the shoulder of compatriot Aman Wote for much of the race, the 19-year-old Ethiopian took the lead with 300 metres to go and was never threatened, cruising to an impressive win in his 2019 debut.

"I felt very strong," the understated teenager said, minutes after succeeding another compatriot, Yomif Kejelcha, as the world leader. "It was a very good race."

That too, was an understatement.

Wote and Tefera shot to the front from the gun, running in the shadow of the pacesetter but for most of the first 1200 metres. But Tefera looked impatient with the tempo, even as the pair stretched their lead ahead of a strung out chase pack that included Polish record holder Marcin Lewandowski.

The Pole used his strong 800m speed to eat up the deficit in the race's second half, moving up from fifth to second with two laps remaining. But it wasn't enough to challenge Tefera, who improved his lifetime best from 3:36.05.

"The opening was a little slow," Tefera said. "I was expecting faster."

That chance may come in his next race in Liévin, France, on Sunday (10).

Lewandowski was next in 3:36.50 to clip 0.87 from his own national record, a performance rewarded by a long victory lap and celebratory singalong with the capacity crowd of 5200 joining in.

Kalle Berglund of Sweden was third, his 3:36.63 also a national indoor record.

This was the fifth edition of the Copernicus Cup and its third as a part of the IAAF World Indoor Tour, a series of the six finest indoor meetings on the planet, in which athletes compete for points in designated tour disciplines. Nine were on the programme in Torun, with world leads emerging in one and equalled in another.

Seventy-five minutes after cruising through his heat in a season’s best of 7.55, Orlando Ortega got off to a cautious start in the final, before forging to a clear lead by the third hurdle. He then powered on, adding to his advantage over the final two barriers before blasting towards and across the line in 7.49 to equal the world lead. The Olympic silver medallist's winning time also equalled the third fastest of his career.

He'll be back in action in Madrid on Friday.

Milan Trajkovic of Cyprus started quick and held his form to finish second in 7.54, beating Jarret Eaton of the US into third. Eaton, the world indoor silver medallist last year, clocked 7.60.

The women's 800m was billed as an assault on Ajee Wilson's 1:59.26 world lead, and more specifically for Laura Muir, on the 1:58.43 British record held by Jenny Meadows since the 2010 World Indoor Championships. The race may have fallen a little short on those counts, but wasn't bereft of drama.

Habitam Alemu, the fourth-place finisher at last year's World Indoor Championships, looked strong from the gun, choosing to run close to the pacesetter while Muir, biding her time, settled into mid-pack.

Running fifth behind the pacesetter at 200m, Muir moved up a spot with each subsequent lap until she tucked in behind Alemu at the bell. But even as Muir chipped away at the deficit over the final lap, the Ethiopian held firm, fighting off the Briton's challenge over the waning metres and through to the line. Alemu clocked 1:59.49, just 0.01 ahead of Muir. Both were rewarded with personal bests.

Poland's Sofia Ennaoui, whose strengths lie at longer distances, was third in 2:00.40 with Selina Buchel of Switzerland, the two-time defending European indoor champion, was fourth in 2:00.98.

World indoor champion Juan Miguel Echevarria wasn't the picture of consistency in his second competition of the season, but was nonetheless pleased with his first victory of the year.

The 20-year-old Cuban's start was promising, opening with an 8.12m season's best to quickly dispose of the 7.98m meeting record set by Li Jinzhe four years ago. But then frustrations set in: a pair of fouls and a pass before he closed with two more measured efforts after take-offs well behind the board.

His first-round effort was still well ahead of Swede Thobias Nilsson Montler, the winner in Karslruhe, who reached 7.97m in the second round. Pole Tomasz Jaszczuk was third with 7.87m, a season's best.

There was drama too in the women's 60m with world leader Ewa Swoboda prevailing, despite arriving with a head cold.

The Pole got out reasonably well, building a small margin on Marie-Josee Ta Lou, the world indoor silver medallist, about 20 metres into the race. Ta Lou got into her stride 20 metres later, but couldn't quite catch Swoboda, who took the victory on the lean by a scant 0.01 in 7.15.

Further back, Imani Lansiquot of Great Britain was third in 7.23.

Pavel Maslak looked like the three-time world 400m champion that he is, with his first commanding performance of the season. The Czech took control from the break and never relented en route to a 46.19 win, a season’s best.

Slovenia's Luka Janezic, the fastest in the field coming in, overtook Pole Karol Zalewski over the final 30 metres to finish second in 46.46.

In the first heat, Nathan Strother, the Boston World Indoor Tour leg winner, took the lead just after the midway point en route to his convincing victory in 46.32 to finish second overall. He was nearly a second clear of Poland's Rafal Omelko, who clocked 47.24.

The meeting got underway with the women's shot put where Christina Schwanitz collected her third victory of the season in four starts. But the German didn't really find her groove until the fifth round when she threatened the 19-metre line with an 18.97m effort to wrestle the lead from Belarusian Aliona Dubitskaya, who controlled the competition from her 18.84m effort in the round two. She went down fighting too, reaching 18.91m with her final throw.

Christina Schwanitz, winner of the shot put at the IAAF World Indoor Tour meeting in Torun

Behind them, Jessica Ramsey of the US reached an 18.73m lifetime best to finish third.

Off of the World Indoor Tour programme, Sam Kendricks prevailed in his showdown against Pole Piotr Lisek, topping 5.78m on his second attempt. The world champion then went out after three tries - one reasonably close - at a would-be meeting record of 5.92m. Lisek topped out at 5.68m to finish second.

The women's 60m hurdles was nearly as close as the men's, with Germany's Pamela Dutkiewicz taking the win in 7.95, 0.03 ahead of Finn Reetta Hurske.

Like Swoboda, Erik Sowinski didn’t let a head cold ruin his visit to Torun, turning in his first victory of the season with a smart front-running performance in the men’s 800m. Tailing the pacer for the opening two laps, the 2016 world indoor bronze medallist led for the remaining 400 metres, holding off Moroccan Mostafa Smaili by 0.21 in 1:47.49. Poland's Mateusz Borkowski was third in 1:47.78.

The IAAF World Indoor Tour resumes on Friday (8) in Madrid. 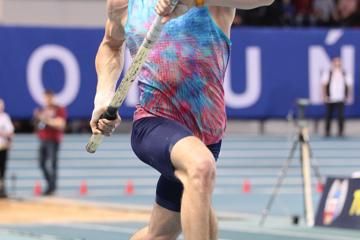 Lisek and Bukowiecki dominate in Torun 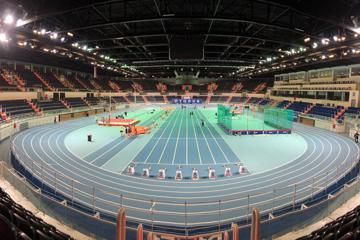