The usual Brazilian dominance was displayed at the 25th edition of the South American U18 Championships, held in the Paraguayan city of Encarnacion, by the Parana River and on the border with Argentina, on 25-26 September.

The city's first area event, held at the track of the ‘Centro Comunitario’, saw the largest South American nation top the medal table with 47 (15 gold, 19 silver and 13 bronze), ahead of Colombia with 30 (11, 8, 11) and Argentina with 19 (7, 7, 5). Ten of the 11 participating nations obtained at least one medal, while Surinam and Guyana did not attend.

De Oliveira took the very competitive 400m hurdles ahead of Colombian Maria Alejandra Murillo, who clocked 59.55 and was also inside the previous championship record (59.64 by Colombian Valeria Cabezas, from 2018). De Oliveira, who was born in Portugal to Brazilian parents and trains in Santa Catarina, also set a personal best.

The long jump witnessed a peculiar situation. The event was won by 16-year-old Vanessa dos Santos from Brazil with a wind-aided 6.15m (2.5m/s) from round four. The 17-year-old Cantoni jumped a wind-legal 6.14m (1.7m/s) in round five, which broke the championship record and secured her the silver medal. Dos Santos’s best legal jump came in round one, when she had an effort of 6.10m (1.7m/s). The previous championship best was 6.13m by Brazilian Leticia de Melo (from 2014) and Colombian Yuly Quinto (from 2016).

Ecuadorian Navarrete took the title in the 2000m steeplechase, the sole gold medal for Ecuador at the event, in 5:58.61, ahead of Argentina’s Jeronimo Peralta. 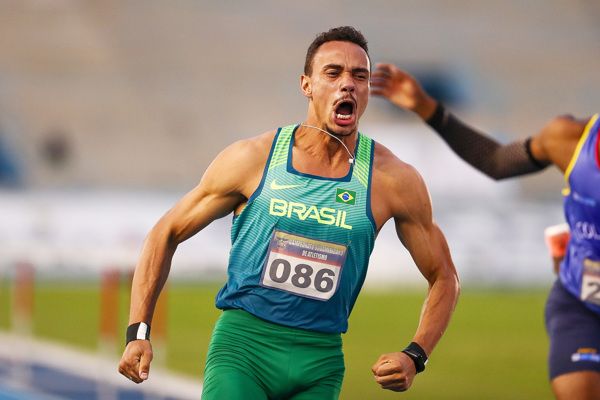