Full-lap heroics highlighted action on the track at the opening meeting of the 2018 IAAF Diamond League series in Doha on Friday (4).

Five of the evening’s eight world leads came on the track, with none as warmly received as Abderrahman Samba’s victory in the 400m hurdles. The world leader coming in at 47.90, it was clear from the outset that the 22-year-old Qatari’s ambitions included supplanting that mark from his career best CV.

The clear leader as the field entered the backstretch, Samba extended it between every barrier and never relented. He barely slowed as he powered down the final straight en route to a 47.57 world lead and Diamond League record. His winning margin? 1.51 seconds ahead of Bershawn Jackson, who was forced to watch Samba break his 47.62 series standard.

“I have a feeling this will be a great season for me, and all I want to do is run even faster,” said Samba, whose performance elevated him to spot No. 18 on the all-time list.

“Winning at home is an amazing feeling, especially to break not only my record and the national record, but the Diamond League record as well.”

Fifty minutes earlier, Steven Gardiner was nearly as dominant in the flat 400m.

As the silver medallist at last year’s World Championships, the Bahamian’s 400m credentials were solid, and he put them on full display as he confidently cruised down the homestretch to a 43.87 win, clipping 0.02 from his own national record and smashing the six-year-old meeting record by 0.32. It was also his second national record in the span of four weeks; on 7 April he clocked 19.75 in the 200m.

Here in Doha, he crushed a solid field, too, with Qatar’s Abdalleleh Haroun coming home a distant second in 44.50. Isaac Makwala, the Commonwealth champion, was even further back, panting across the line in 44.92.

Last year, Makwala emerged as a new global 200/400m threat. This year, Gardiner has arrived, pounding loudly on the entrance door into sprinting’s most grueling club.

The effort didn’t leave him unscathed. A few minutes after the finish he was wheeled off the track on a stretcher, but signaling two thumbs up.

Another world lead came in the next event, courtesy of world and Olympic 800m champion Caster Semenya.

Making her break from a crowded field with about 100 metres to go, the South African cruised to a 3:59.92 victory in the 1500m, pushing through the four-minute barrier for the first time and lowering her own national record and world lead in the process.

"I think we definitely achieved what we came here for," said Semenya, whose previous best and world lead was 4:00.71. "I want to maintain this momentum throughout the season, but will also make sure I continue to keep healthy."

Earlier, Marie-Josee Ta Lou staked an early season claim as the world’s leading women’s sprinter. Pulling away from a five-women pack after 70 metres, the 2017 double dash silver medallist chiseled together an insurmountable cushion to take the win in 10.85, clipping 0.01 from her previous lifetime best for another world lead.

"I honestly competed to see what I can do and am really happy with my win - more than anything though, I'm so happy about the time!"

Blessing Okagbare Ighoteguonor of Nigeria was second in 10.90, 0.03 ahead of double Olympic champion Elaine Thompson.

The women’s 100m hurdles was nearly as close, and it too wasn’t decided until the final two strides.

Olympic champion Brianna McNeal was running strong from the outset, building a visible lead over world record holder Kendra Harrison by the midway point. But Harrison, to her right in lane five, ate up that deficit over the final two barriers to take the win in 12.53 to McNeal’s 12.58. Further back, Sharika Nelvis clocked 12.75 to finish out the US podium sweep.

The 20-year-old waited until the field entered the top of the stretch before deciding to pounce, forging ahead to finish unthreatened in 19.83, another meeting record. It was also a lifetime best, eclipsing the 19.90 he ran in Shanghai one year ago.

Noah Lyles takes a big win in the Doha 200

Jereem Richards from Trinidad and Tobago was second in 19.99 with world champion Ramil Guliyev third in 20.11.

In the men’s 800m, Emmaneul Kipkurui Korir took the lead with about 220 metres to go, and was never headed en route to his 1:45.21 win. His Kenyan compatriot Elijah Manangoi, the world 1500m champion, closed well, moving from fifth over the final 250 metres to finish second in 1:45.60.

Emmanuel Kipkirui Korir after his 800m win in Doha

Non-Diamond discipline action was Ethiopian domain. Chala Beyo ran the final lap at the front on the way to his 8:13.71 win while Taresa Tolosa, fifth with half a lap to go, took the 1500m in 3:35.07. 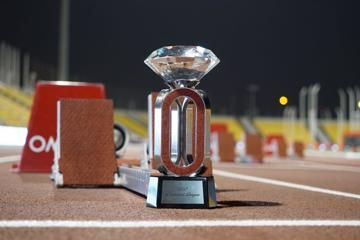 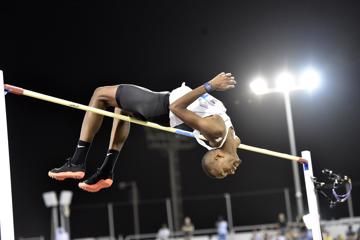