Galen Rupp added another milestone to his career in the 10,000m with an unprecedented fifth national title in a row at the USA Championships at Drake Stadium in Des Moines, Iowa on Thursday night (20 June).

It’s the latest breakthrough for the 27-year-old Rupp, who placed second in the 10,000m at the London Olympics in August to become the first US athlete to win a medal in the event since Billy Mills’ historic gold in 1964.

Rupp won in warm conditions in 28:47.32 on Thursday night with a 4:10 final mile to pull away from Dathan Ritzenhein and Chris Derrick. Rupp coasted down the final homestretch looking over his left shoulder in the last 50m.

“I just wanted to make sure that I had enough space and didn’t run harder than I needed to,” Rupp said.

Ritzenhein was second in 28:49.66 and Derrick was third in 28:52.25. Rupp, Ritzenhein and Derrick pulled away after the entire field was within 25m after a 14:56 first 5K. All three have run the IAAF World Championships A standard of 27:40.00 and will represent the United States in Moscow in August.

Rupp didn’t have any designs to challenge his American record of 26:48.00 set in 2011 because of the challenging weather conditions, but extending his national championships winning streak was a priority. He is uncertain whether he will double in the 5000m on the four-day meeting on Sunday.

“It’s all about winning here, the time is irrelevant,” Rupp said. “It’s hot out there. The conditions aren’t great. I am glad to have it over with.”

There were few tactics for Shalane Flanagan in the women’s 10,000m. The American record-holder led from the start to win in a stadium record of 31:43.20.

Jordan Hasay finished second in 32:17.34 in her professional debut with the Alberto Salazar-led Oregon Project. Teammate Tara Erdmann was third in 32:24.16. It was a redeeming meet for Hasay, who had failed to qualify for the NCAA Championships in the 10,000m and finished third in the 5000m at the NCAA Championships in her final collegiate meet representing the University of Oregon two weeks ago.

The biggest news in the women’s 100m was the absence of Carmelita Jeter in the first-round heats after the reigning World 100m champion failed to start.

Blustering winds on the homestretch that registered as strong as -3.5m/s in the men’s 100m and -3.2m/s in the women’s 100m affected first-round heat times noticeably. USATF later announced that the direction of the sprint events will be reversed for the following rounds so that the athletes have the wind at their back.

Sanya Richards-Ross ran 51.43, her fastest time of 2013, to win her 400m heat in her second race after toe surgery last September. The Olympic champion had run 53.77 to finish last at the Prefontaine Classic earlier this month in her first meeting since the procedure to shave two bones on her big toe.

Richards-Ross was the second-fastest qualifier behind Francena McCorory (51.38).

There were several casualties in the men’s 400m qualifying. Newly-crowned NCAA champion and London Olympic 4x400m silver medallist Bryshon Nellum did not advance after suffering a leg injury in practice earlier in the week. Nellum, who has set a PB of 44.73 this year, finished sixth in his heat in 47.81.

NCAA champions Omar Craddock and Andrea Geubelle won the men’s and women’s Triple Jump finals that were assisted by tailwinds.

BACK
Pages related to this articleAthletes
Shalane Flanagan 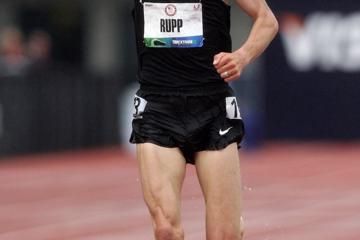 Rupp and Hastings battle through heavy rain i...