On a bitterly cold day just outside the Hungarian capital, when the thermometer never went above zero, there, superb performances in the senior races at the 19th SPAR European Cross Country Championships saw Italy’s Andrea Lalli and Ireland’s Fionnuala Britton triumph.

In the case of Lalli, he became the first runner to win the hat-trick of striking gold at junior, under-23 and then senior level, while Britton achieved the unique accolade of becoming the first woman to successfully defend her title.

Held at the Hungarian Open Air Museum in the quaint town of Szentendre 20km north of Budapest, a blanket of snow made the setting even more picturesque on an often-tricky course that also saw athletes run past a windmill and through an old barn.

France’s Hassan Chahdi, the 2010 under-23 winner and fourth as a senior, was the first to show his cards in the senior men’s 9880m race, and built up a notable lead 2km into the race with Lalli just a couple of strides behind.

Approaching the half-way mark, Chahdi was swallowed up by the chasing pack as Lalli, the winner of the junior title in 2006 and under-23 title two years later, went into the final lap with a 20-second lead over the men behind him, which contained seven runners all in contention for the minor medals.

On the last lap Lalli looked behind on several occasions, almost in shock that he was leading by such a huge margin. Easing down in the final 250m while waving to the crowd, and picking up an Italian flag around 120m before the line, the Italian was determined to enjoy his moment of glory before he stopped the clock in 30:01.

“I was sure that today was going to be be my day," said Lalli. "I felt being very strong. It’s strange but I’m not tired.”

After looking as though he was struggling at the bell, Chahdi found a second wind in the closing stages to take silver while Lalli’s teammate Daniele Meucci finished well for the bronze medal.

Ukraine’s nine-time champion Sergey Lebid, now 37, finished a solid 15th and continued his streak of competing in every edition of the Championships while Belgium’s 2011 winner Atewlaw Bekele is still not back at his best after a spring and summer plagued by injury and illness, trailing home 57th.

With three athletes in the top 10, Spain took the team title ahead of Britain with Italy securing the bronze.

A modest pace during the early kilometres meant that by the halfway point in the women's 8050m race, a large group was still bunched together. Defending champion Britton found herself a reluctant leader with Portugal’s Ana Dulce Felix right on her shoulder. Italy’s Nadia Ejjafini, who narrowly missed out on a medal last year, was also right behind Britton, along with France’s Sophie Duarte and The Netherlands’ Adrienne Herzog.

Not long after completing the fourth lap, Britton started to push the pace and helped a group of seven athletes break away before the Irish runner surged again.

Felix, the 2012 European 10,000m champion, suddenly dropped back and instead it was Belgium’s Almensh Belete who doggedly tracked the leader.

Less than a kilometre before the finish, Britton dug in deep and Belete began to fall back as Felix recovered her composure and got back into contention, but Britton kept her focus and maintained her lead to the line, winning in 27:45.

“I can hardly believe that I have managed to defend my title," reflected the delighted Britton. "It was really tough at the end, I can’t put into words how it feels to hear all the Irish supporters screaming: ‘she’s coming, she’s coming!’”

Two seconds adrift, Felix also repeated her position from last year, while Herzog held on for the bronze medal ahead of Belete.

With three athletes in the top 20, Ireland found themselves the surprise winners of the team title for the first time, one point ahead of France as 2011 winners Great Britain took the bronze medals.

Gold at last for Terzic

The first contest of the day, the junior women’s 4000m race, began to unfold at the half-way stage, when Great Britain’s defending champion Emelia Gorecka moved into the lead and began to push the pace.

Gorecka was tracked closely by Serbia’s world junior 1500m silver medallist Amela Terzic, who had taken silver and bronze respectively in 2010 and 2011, but with 800m remaining Terzic suddenly seemed left for dead

However, just before the last bend 200m before the line, Terzic found an extra burst of energy and kicked hard passing Gorecka before winning comfortably in 13:29, eight seconds ahead of flagging Gorecka, who is still young enough to bid to regain her title in 2013.

For the eighth time in the past nine years, Great Britain took the junior women’s team title.

Two-thirds of the way into the junior men’s 6025m race, Poland’s Szymon Kulka pressed ahead with only Bulgaria’s Mitko Tsenov for company before the latter couldn’t stay with the pace in the final kilometre.

Kulka’s lead grew and grew and he crossed the line victorious in 18:43, four seconds ahead of Tsenov who gained Bulgaria’s first ever medal at the European Cross Country Championships.

The team contest was a close one as Russia took gold with 50 points, one point ahead of France with 2011 winners Great Britain finishing third this time with 54 points.

Ingebrigtsen and Coulson run away with under-23 titles

In the men’s under 23 8025m race it initially looked as though Spain’s Abdelaziz Merzoughi was on for a gun-to-tape victory after opening up a huge lead of around 60 metres just a few minutes into the race, but the 2010 junior winner began to struggle just before half way.

US-based Belgian Soufiane Bouchikhi then took up the running, gradually pulling away from the rest of the field.

At the bell before the final 1470m lap, Bouchikhi had a nine-second lead but then Norway’s European 1500m champion Henrik Ingebrigtsen set out in pursuit of the audacious Eastern Kentucky University student and moved ahead of him just before they passed through the barn 700m from the line.

Ingebrigtsen then showed impressive and unexpected endurance as he powered his way to the finish, eventually crossing the line 10 seconds ahead of Bouchikhi. Britain’s James Wilkinson, second 12 months ago, came through to take bronze.

Although they did not have any individual medallists on this occasion, France took the team honours ahead of Spain while Britain finished one point ahead of Norway for the remaining two places on the podium.

In the women’s under-23 race over 6025m, Britain’s Jess Coulson ran away with the title and fulfilled her role as pre-championships favourite after a couple of outstanding performances in November.

Coulson moved into the lead just after the halfway point, initially tracked closely by Russia’s 2010 junior silver medallist Gulshat Fazlitdinova and France’s Clemence Calvin before she started to forge ahead and leave the rest trailing in her wake.

With 2km to go, Coulson’s lead had grown to nine seconds, which she extended to 15 seconds as she passed through the barn for the last time.

An outstanding last lap by Russia’s Lyudmila Lebedeva saw her move through to second but she had to settle for crossing the line nine seconds adrift of Coulson, who was a clear winner in 20:40. In a photo-finish Clavin got the verdict for the bronze medal but was given the same time of 20:52 as Fazlitdinova.

With the best score of the day, tallying just 27 points after getting all four of their scorers in the top 13, team honours went to Russia ahead of Great Britain, who were defeated for the first time in this contest since the category was inaugurated in 2006, while Germany were third.

Phil Minshull and Jon Mulkeen for the IAAF 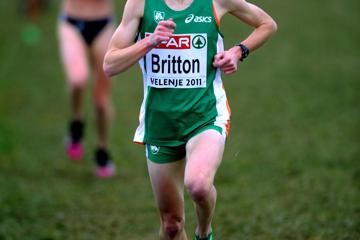 Bekele, Britton and Gorecka back to defend Eu...