In the first of an anticipated series of high-profile pole vault contests this winter, Raphael Holzdeppe defeated Renaud Lavillenie and Shawn Barber in front of a capacity crowd at the Perche Elite Tour in Rouen on Saturday (23).

Lavillenie cleared 6.00m in this competition 12 months ago – and 6.04m in 2014 – but the Olympic champion was unusually out of sorts and had to settle for fourth with 5.70m. Barber finished one place behind Lavillenie on countback.

Holzdeppe was also on the cusp of finishing down the field as the 2013 world champion needed three attempts at 5.77m after passing at 5.70m.

But having averted danger at the previous height, the German seized the competition from Lavillenie – who passed at 5.77m – with a second-time clearance at an indoor lifetime best of 5.84m before two solid attempts at 5.91m.

World indoor champion Konstadinos Filippidis from Greece took the runner-up spot on countback with 5.77m with Kevin Menaldo surprisingly taking the domestic spoils ahead of Lavillenie in third.

Holzdeppe, Lavillenie and Barber are all set to compete at the first leg of the IAAF World Indoor Tour in Karlsruhe, Germany on 6 February.

On her season’s debut, Nikoleta Kyriakopoulou from Greece cleared 4.71m to claim victory in the women’s competition before three unsuccessful attempts at a would-be national indoor record of 4.82m.

World leads from Harrison and Ghasemi

She first lowered her lifetime best and world-leading mark in the 60m hurdles to 7.86 before improving to 7.83 in the final.

At the same meeting, world 100m bronze medallist Trayvon Bromell equalled his 60m lifetime best of 6.54, set at the same competition 12 months ago. Cameron Burrell – the son of former world 100m record-holder Leroy Burrell – was second behind Bromell with 6.60.

The standout performance on the in-field came from European under-23 shot put champion Filip Mihaljevic from Croatia, who improved his lifetime best from 20.16m to 20.69m.

As a small aside, 2003 world 100m champion Kim Collins ran 6.53 on Saturday but that mark was set outdoors in a small meet in Spanish Town, Jamaica.

Portland track put to the test

Two world-leading marks were set on Friday (22) on the track that will be used for the IAAF World Indoor Championships Portland 2016.

The track is currently at the Run Club House of Track where it is being used for training and competition purposes before being moved to the Oregon Convention Center where the World Indoor Championships will be held.

Pan-American champion Andrew Wheating, competing in his first ever indoor 1500m race, clocked a world-leading 3:39.82, while Paul Chelimo also jumped to the top of the world lists after winning the 3000m in a PB of 7:44.68.

At the DeLoss Dodds Invitational in Manhattan on Friday, world junior long jump champion Akela Jones of Barbados smashed her own national indoor record in the pentathlon.

There were two world leads in the 200m at the Power 5 Invite in Birmingham, Alabama on Saturday. Britain’s Nethaneel Mitchell-Blake sped to 20.57 in the men’s event, while Felecia Brown won the women’s contest in 22.88.

Venezuela’s Yulimar Rojas looks set to be one of the breakout athletes in the triple jump this year. The 20-year-old improved her lifetime best from 14.20m to 14.69m to break the South American indoor record in Madrid on Saturday.

Rojas, who is coached by legendary long jumper Ivan Pedroso, achieved her world-leading mark off a shortened 11-stride approach. 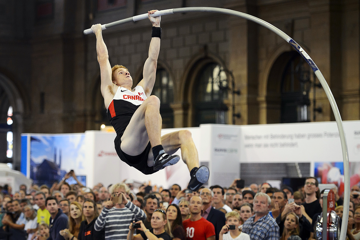