Gebrhiwet gets the plaudits, three world leads in Boston

His mark was a meeting record, 2013 world-lead, and a new World junior record, just eclipsing the 7:32.89 run by Kenya's Isiah Koech in Lievin last year. Close behind him, the crowd roared as Rupp clocked a personal best 7:33.67, just 1.24 seconds off of Bernard Lagat's American record.

"We don't worry about times," said Alberto Salazar, who coaches Rupp and Britain’s double Olympic gold medallist Mo Farah.  "Galen would have liked to break that American record today, but he's just going to go in and compete.  If the race is right he might break it."

Conditions were right for London 2012 Olympic Games Pole Vault champion Jenn Suhr, who easily won in a world-leading 4.76m, although she wasn't successful in breaking her own meeting and American record.

After clearing her winning height, Suhr made two attempts at 4.90m before stopping.  She came very close on her first attempt, pushing the bar off with her torso.  On the second attempt she hit it with her foot. "I made a good jump here so I'm happy with it," said Suhr, who had the distraction of her car breaking down eight kilometres from Boston en-route to the meeting.

“Honestly, the record was there. I seriously thought I had it on the first jump.  On the second one, it was a good jump, but I had too much momentum and I just blew through the pole."

Suhr's win was expected but Janay DeLoach's in the 60m Hurdles definitely wasn't.  The 2012 Olympic Games Long  Jump bronze medallist came out of the blocks fast to beat Great Britain's Tiffany Porter by  0.02 in a personal best of 7.97.

"I've been doing the Hurdles the last couple of years, and it was really to get away from Long Jump and do something fun," commented a delighted DeLoach. "I've just been getting better and better, working really hard at it.  I'm having a blast."

"I've been working so hard, and I'm just so happy all this is happening. The biggest difference between this year and last year is learning how to run relaxed and going through all my phases in my race."

Three-time Olympic gold medallist Tirunesh Dibaba won the women's Two Miles in what, for many people, may have been the most interesting race of the evening.

Dibaba, who is preparing for her marathon debut in London in April, wanted to break Ethiopian compatriot Meseret Defar's meeting record of 9:10.50, but ended up running lap after lap alone. She won in a world-leading 9:13.17 but said she had been ready to run much faster.

"I thought the pacemaker would go faster than this," said Dibaba. "But, actually, that didn't happen. I could have run faster."

More than half-a-lap behind Dibaba, US high school star Mary Cain was on her way to breaking no less than three records.  After sprinting past Canadian Olympian Nicole Sifuentes in the final 50 metres, the 16 year-old finished third in 9:38.68, smashing Melody Fairchild's almost-ancient US high school record of 9:55.92, which had stood for nearly 22 years.

En-route, Cain passed 3000m in 9:04.51, breaking not only Fairchild's high school mark of 9:17.4 but also Aisling Cuffe's US junior record of 9:15.56 set last year. "I definitely felt very strong," said Cain, broke the USA high school Mile record one week ago in New York City.  "I was trying to stay in the race as much as I could, and stay really relaxed."

Emerging US middle-distance star Matthew Centrowitz won a tactical Mile in 3:56.26, holding off a final charge to the tape by Will Leer, who finished second in 3:56.35.

"I've told you guys for a couple of weeks now I'm fit, I was ready to run fast.  I guess with the way the field went the conditions today it just ended up being tactical," added the slightly disappointed 2011 IAAF World Championships 1500m bronze medallist.

Other event winners included Ebonie Floyd in the 400m in 52.51, Phoebe Wright took the 800m in a close finish over training partner Erica Moore in 2:03.96, and Morocco's Btissam Lakhouad won a slow, tactical Mile in 4:39.23.

David Monti for the IAAF 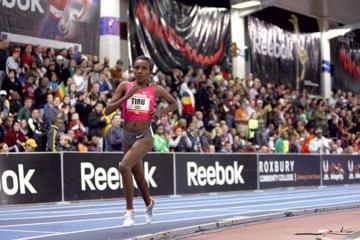 Dibaba, Suhr and Rupp to kick off USATF Champ...