One win apiece for Vicaut and Lavillenie at French Championships

Sprinters Jimmy Vicaut and Christophe Lemaitre clashed twice at the French Championships, which concluded on Sunday (12), with both sprinters coming away from Villeneuve d'Ascq with one victory each and booking their places on the team for the IAAF World Championships in Beijing.

In the 100m final on Saturday, the second day of the championships, Emmanuel Biron got off to the best start but was caught first by Lemaitre and then by Vicaut by half way. Vicaut then charged away over the final 40 metres to win in 9.92 (0.7m/s).

It was the second-fastest time of his career, following the 9.86 equal European record he set at the recent IAAF Diamond League meeting in Paris.

Curiously, Vicaut and Lemaitre reversed the finishing order from the 2011 French Championships, when Lemaitre won in 9.92 to Vicaut’s 10.07.

One day later, the pair returned for the 200m. As was the case in the 100m, Lemaitre won one heat while Vicaut won the other. But the outcome in the final was different to the shorter sprint.

They were level coming off the bend as Lemaitre began to pull away. Once or twice it looked as though Vicaut was getting back on equal terms, but Lemaitre went clear in the closing stages to win in 20.28 (0.6m/s). In second, Vicaut equalled his season’s best of 20.42.

For the first time since April 2013, pole vault world record-holder Renaud Lavillenie had suffered two losses in a row, finishing fifth in Paris and third in Lausanne at the IAAF Diamond League meetings earlier this month.

But in Villeneuve d'Ascq, the Olympic champion was back on top. Just two other men were left in the competition when Lavillenie opened his campaign at 5.70m. Kevin Menaldo, one of the men who finished ahead of Lavillenie in Lausanne, then regained the lead with a first-time clearance at 5.75m.

They upped the bar to 5.85m and Lavillenie got over it on his first try, taking back the lead as Menaldo failed three times at that height. Lavillenie ended his series with three failed attempts at 6.00m, but he was happy to come away from the competition with a victory.

Aside from the sprints and pole vault, the men’s 110m hurdles was one of the most highly anticipated events of the championships.

Even in the absence of world junior champion Wilhem Belocian, who is currently injured and would have been competing at the European Under-23 Championships anyway had he been fit, the final did not disappoint.

European indoor champion and French record-holder Pascal Martinot-Lagarde had won the first heat in 13.36, while Dmitri Bascou clocked a PB of 13.23 to win the other one. But in the final, two-time European silver medallist Garfield Darien upstaged both of them to win in 13.17 (0.7m/s).

PBs for Guei and Gayot

European 4x400m champions Floria Guei and Marie Gayot met over one lap of the track, but last year’s finishing order was reversed in the final as Guei defeated the defending champion. Both were rewarded with PBs, Guei clocking 51.06 and Gayot running 51.27, meaning France’s relay team for the World Championships will likely be even stronger than before.

Ta Lou was one of several international guests to win in Villeneuve d'Ascq. Belgium’s Niels Pittomvils won the decathlon with a PB of 8049, while Frank Elemba of the Democratic Republic of Congo set a national record of 20.24m to take the shot put title. 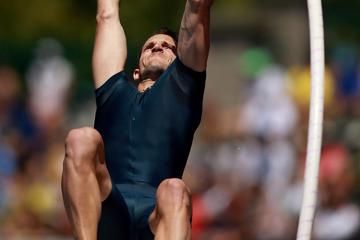