World silver medallist Pedro Pablo Pichardo leapt to 17.71m in the triple jump to produce the highest note of the Cuban Championships, held on 18-20 March at Havana’s Estadio Panamericano.

Eleven days after claiming the bronze medal at the IAAF World Indoor Championships, the 20-year-old confirmed his superb form shown a month earlier when he jumped a world-leading 17.76m at the same venue in the Cuban capital.

He smashed the 29-year-old championship record of 17.57m, set by Lazaro Betancourt.

“I am very happy with the record, especially because it came only three days after resuming my preparation following the World Indoor Championships,” said Pichardo while applying ice on his right leg.

“I followed the strategy for this stage in our training and only did three jumps,” he added. “I will continue to prepare to achieve my goal: to equal Teddy Tamhgo and go beyond 18.04m.”

With no global senior championships this summer, Pichardo is also eyeing a good performance at the IAAF Continental Cup in Marrakech, in September.

World youth champion Lazaro Martinez, who became the 22nd Cuban to break the 17-meter mark one month earlier, followed him with a solid 17.11m. It is the second-best ever wind-legal jump for the 16-year old, who earlier this year set a world youth best of 17.24m.

The Cuban Championships – or Copa Cuba – witnessed superb performances from juniors in preparation for the IAAF World Championships in Eugene later this summer.

Another 18-year-old, Gilda Casanova, came third in 2:03.28, a massive improvement of more than three seconds on her previous best.

Two days prior, Casanova had prevailed in the 400m with a world junior-leading 53.13 with Diago in third in 53.87, both setting PBs.

In the men’s sprints, the 100m final was affected by hand timing. In the semi-finals, juniors Yaniel Carrero (10.50) Cesar Ruiz (10.51) and double world youth bronze medallist Reynier Mena (10.57) set the stage for the final, when Carrero, Mena and Ruiz swept the medals.

World and Olympic finalist Cleopatra Borel was the only foreigner to dominate an event as she won the shot put with a season’s best of 19.10m, her best mark for nearly three years.

One month after setting an area junior record in the heptathlon (6231), world junior champion Yorgelis Rodriguez opted for the high jump. She cleared 1.82m for second, the same height as 2011 Pan American Games champion Lesyani Mayor.

In preparation for the IAAF World Relays, Williams Collazo, Raidel Acea, Osmaidel Pellicier and Yoandys Lescay ran a championships record of 3:04.86 in the men’s 4x400m, better than the 3:05.52 mark set in 2011. They are expected to be joined by 400m hurdles specialist Omar Cisneros in Nassau.

BACK
Pages related to this articleAthletes
Cleopatra Borel 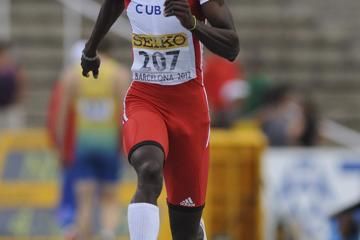