Eritrea’s Teklemariam Medhin and Kenya’s Emily Chebet captured respective brilliant victories at the 33rd Cross Internacional de Italica – the second Spanish leg of this season’s IAAF Cross Country Permit series – on Sunday (18) held under gruelling conditions with rain, gusts of wind of up to 60km/h and underfoot mud in some areas of the circuit.

In doing so, world cross-country bronze medallist Medhin became the first Eritrean to win in Seville; even his illustrious training mate Zersenay Tadese could do no better than second place back in 2008.

As for Chebet, the two-time world cross-country champion proved to be in magnificent form and looks ready to defend her world crown in two months’ time in Guiyang, China.

However, they succeeded in different ways as Medhin ran tucked behind Kenya’s 2013 victor Jairus Birech throughout the race before unleashing his final attack 850m before the finish. By contrast, Chebet secured a memorable win as she led from midway race once her toughest rival and fellow Kenyan Mercy Cherono fell to the ground to lose any chance of winning.

The men’s 10.8km contest kicked off at a brisk pace right from the gun despite, the wind hampering athletes’ efforts dramatically. By the second kilometre seven men remained in contention, Turkey’s Polat Arikan being the only European among them.

It was Birech, the Diamond Race steeplechase winner, who made most of the early pace, along with his compatriot and defending champion Paul Tanui plus Uganda’s world junior 10,000m champion Joshua Cheptegei. Meanwhile, Medhin stayed in the middle of the pack, effortlessly moving along.

At midway, the leading group was down to five men: the Ugandan pair of Cheptegei and Timothy Toroitich, the Kenyan duo of Birech and Tanui plus Medhin. A third 2km loop of 6:03, powered by Birech – the fastest steeplechaser last year in 7:58:41 – left first Cheptegei, then Toroitich and later Tanui well behind. Some 19 minutes in, the race became a fierce battle between Birech and Medhin.

While the Kenyan tried several times to leave the long-legged Medhin adrift, the Eritrean ran comfortably at his shoulder. But the strong winds made Birech’s efforts virtually useless as sometimes it was difficult to simply run in a straight line. True to his style, Medhin didn’t give Birech a single turn.

The assembled crowd was wondering about Medhin’s tactics in the closing stages as he is a renowned strong finisher but his rival was an accomplished track runner. The question mark was answered some 850m from home when the Eritrean easily changed his pace, taking advantage of an uphill section to build a solid margin on Birech in a matter of a few seconds.

At the finish line, 11 seconds separated the first two while an interesting battle took place between Toroitich and Tanui for the minor place on the podium, the former finally prevailing by 10 seconds to take revenge from the 2011 world cross-country silver medallist Tanui, who beat the Ugandan to win here last year.

Today’s race was Toroitich’s seventh podium finish on Spanish soil this cross-country season, but the Ugandan – who finished fifth at the 2013 World Cross – will now return to his home country to prepare for this year’s World Cross.

The top-placed Spaniard was marathon specialist Javier Guerra in ninth.

“I’m in very good shape now and full of confidence,” said Medhin. “At the start of the season I ran in Atapuerca (fourth) and Soria (second) but I was short of form by then. I’ll next go to Elgoibar to continue my build-up for the World Cross Country Championships, which is my primary goal this year.”

Bad luck for Cherono, Chebet in a class of her own

Despite the late withdrawal of former world 10,000m champion Linet Masai due to a knee injury, it was still easy to imagine a Kenyan victory in Seville, given the calibre of athletes entered.

World 5000m bronze medallist Mercy Cherono took charge of the early pace. By 2km, only four other women could live with Cherono’s pace as she was joined by Chebet, Magdelene Masai – fresh from a win at the Cross Internacional de San Sebastian – Baharain’s Mimi Belete and Spain’s Trias Gebre, but the latter lost ground shortly afterwards.

Just before the midway point, Cherono injected a frantic pace which allowed her to open a slight advantage over Chebet while Belete and Masai rapidly fell from the leading group. For one kilometre Cherono ran 15 metres ahead of Chebet but the former fell over some 17:45 into the race in a muddy section. It took her several seconds to regain her balance and recover, losing valuable seconds in the process.

By the time Cherono was back into her rhythm, Chebet was already 40 metres ahead, but Cherono’s fall proved to also be psychological as she never threatened the world cross-country champion’s lead from then on.

Nevertheless, Chebet’s impressive solo run over the closing 2.5km suggests Cherono’s task of beating her would have been far from easy, as the two were separated by 20 seconds at the tape.

Cherono managed to at least keep Belete at bay to narrowly secure the runner-up spot and complete a full series of podium places in recent years, having finished third last year and first in 2013.

Both Chebet and Cherono are reportedly in full preparation for the World Cross. Chebet’s next outing might be in Elgoibar next Sunday (25). 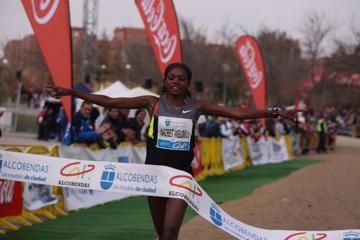 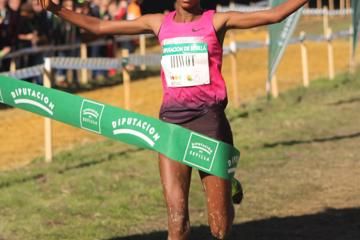