Birthday win for Wells in Lignano

Olympic bronze medallist Kellie Wells was in the spotlight at the 24th edition of the Meeting Sport e Solidarieta in Lignano Sabbiadoro held at the seaside resort in the north-eastern Italian region of Friuli Venezia Giulia on Tuesday (16).

“I love coming to Lignano, the people are very nice,” said Wells, who turned 31 on the day of the competition. “It was my third time running at this meeting. The win was the perfect way to celebrate my birthday.”

US sprinter Shalonda Solomon, the 2004 World junior 200m champion, got off to a flying start in the women’s 100m and pulled away from the rest of the field to take a clear win in 11.15. Solomon backed up her good period of form after finishing second last Saturday at the IAAF World Challenge meeting in Madrid in 11.04.

Jamaican sprinter Jacques Harvey was in dominant form in the men’s 100m, winning in 10.11, just 0.04 slower than his personal best set earlier this year.

Another Jamaican win came from Rusheen McDonald, who held off 2011 World youth champion Arman Hall, 45.28 to 45.56. Hall, still a junior, clocked 44.82 at the US Championships in Des Moines last June becoming the ninth-fastest junior 400m runner in history.

Heather Kampf came very close to dipping under the two-minute barrier with 2:00.04 to win a close 800m race where fellow US athletes Phoebe Wright and Lea Wallace finished within a stride of Kampf.

The local crowd who packed the small Teghil stadium welcomed the newly-crowned European under-23 High Jump champion Alessia Trost, who comes from Pordenone, a few miles from Lignano and is an ambassador of this meeting.

“I did not expect to clear 1.98m especially because I did not start the season very well,” said Trost, who wasn’t competing in Lignano. “Last Saturday I had a lot of adrenaline and I managed to clear 1.98m.”

The other ambassador of the meeting was double Olympic 100m champion Shelly-Ann Fraser-Pryce who took part in a special 50m race with disabled people.

BACK
Pages related to this articleAthletes
Shalonda Solomon 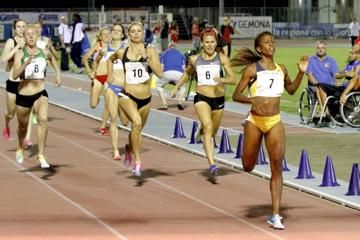 Fascinating night of athletics in Lignano ...