Canadian shot putter Dylan Armstrong and US hurdler Kellie Wells were in the spotlight at the Citta Di Padova meeting as both set meeting records, Armstrong winning with 21.19m, while Wells clocked 12.75 in the 100m Hurdles.

Five World champions from Moscow – Lashawn Merritt in the 400m, Russian 4x400m Relay sprinters Antonina Krivoshapka and Ksenya Ryzhova, and Jamaican 4x100m gold medallists Nesta Carter and Carrie Russell – helped recreate a bit of the magic of the recent IAAF World Championships. Held in the Euganeo Stadium in Padua, the main stand was packed with enthusiastic children and families.

Armstrong, winner of the bronze medal in Moscow and the silver medal in Daegu two years prior, started the meeting on a high note by setting a meeting record with 21.19m in round two. The Canadian record-holder backed it up with four more puts close to the 21-metre barrier (20.78m, 20.86m, 20.97m and 20.80m), all of which would have been enough to win the competition over Jamaican O’Dayne Richards, who finished a distant second with 20.13m.

“It was an amazing competition in front of a great crowd,” said Armstrong. “I wasn’t thinking about the meeting record. I am happy to finish the season strongly. I have two more competitions in Zagreb and Brussels.”

Kellie Wells, Olympic bronze medallist in London, set the second meeting record of the evening, taking the win in the women’s 100m Hurdles in 12.75, improving the long-standing previous mark of 12.79 that had stood to Nigeria’s Angela Atede since 1998.

US 110m Hurdles star Aries Merritt, Olympic champion and World record-holder with 12.80, capped a great meeting in the last track event of the competition with a solid 13.30. It was a welcome return for Merritt who finished second in this meeting in 2006 behind Dayron Robles.

In the past decade of this meeting, Padua has hosted many of the world’s best hurdlers like Liu Xiang, Robles, Merritt and Jason Richardson, all of them past winners here.

“It was a pleasure to come to Padua,” said Merritt. “I competed here two years after winning the World Junior title in Grosseto. It was very important to finish the season on a high note.”

Evgenyia Kolodko, Olympic silver medallist in the women’s Shot Put, produced her first valid mark in the fourth round with 19.29m after three fouls. With her next throw, she improved to 19.67m to take an easy win over Romania’s Anca Heltne (18.16m).

World Championships finalist Alexandria Anderson, who finished seventh in Moscow, got off to a flying start in the 100m to clock 11.05 into a slight headwind of -0.4m/s to beat Jamaican World 4x100m champion Carrie Russell who ran 11.15 three days after dipping under the 11-seconds barrier with 10.98 at the Diamond League meeting in Zurich.

“I wanted to execute a good race and I got a good race,” said Anderson, who set a PB of 10.91 at this year’s US Championships. “The season is going well. I’m aiming to clock a PB before going back home. I have two more competitions in Zagreb and Brussels.”

World bronze medallist Nesta Carter was looking to win in Padua for the third consecutive year and to improve his meeting record of 10.09 set last year, but he was upstaged by USA’s World semi-finalist Isiah Young, who won in 10.22 to Carter’s 10.27. Olympic finalist and 9.88 performer Ryan Bailey finished third in 10.38.

“I had a great season. I won the World title with a great PB, the Diamond Race and I won the Prefontaine Classic,” said Merritt. “I came off 2012 ruined by injury problems, so I am very happy. I enjoyed this meeting. I love Italy. I train with Matteo Galvan. He is a very good guy and he is improving a lot.”

Olympic 400m Hurdles champion Felix Sanchez returned to the scene of his 2006 victory over Bershawn Jackson. Sanchez, fifth at the World Championships in Moscow, was looking to score a second win in Padua but he had to settle with fifth place with 50.24 in a race won by USA’s Justin Gaymon in 49.37 ahead of Great Britain’s Richard Yates (49.60).

Olympic silver medallist and World bronze medallist Will Claye clinched the win in the men’s Triple Jump, jumping 16.75m into a stiff -1.9m/s headwind. His sixth-round leap saw him overtake World Championships finalist Fabrizio Schembri, who had led since the first round but eventually finished second with 16.63m.

In the men’s 800m, Italy’s Giordano Benedetti held off Burundi’s World Championships semi-finalist Antoine Gakeme in a thrilling sprint in the final straight to win in 1:46.93.

BACK
Pages related to this articleAthletes
Dylan Armstrong 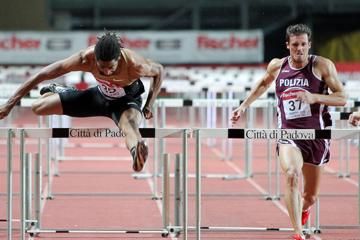 Carter and Richardson the standouts in Padua... 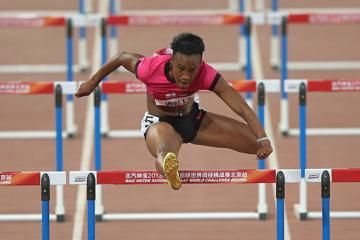 Birthday win for Wells in Lignano...