Many of Russia’s top athletics stars have been pre-selected for the IAAF World Championships, but there are still plenty of spots on the team available for the global showpiece on home soil in Moscow next month.

The National Championships, which are also being held in the capital this week (22-25), is one of the last opportunities for athletes from the host nation to impress selectors.

Action got underway today with most of the programme being heats and qualification rounds. But there were two finals on the track – the men’s 5000m and the women’s 3000m Steeplechase.

The latter was won by Natalya Aristarkhova. Having finished ninth in this event at the past two National Championships, it marked something of a breakthrough for the 23-year-old, who also triumphed at the European Team Championships in Gateshead last month.

She won here in 9:34.33, finishing more than five seconds ahead of European finalist Natalya Gorchakova, who clocked a season’s best of 9:39.47. European under-23 cross-country silver medallist Lyudmila Lebedeva was a close third, setting a PB of 9:39.98.

With Yuliya Zaripova having won the World title in Daegu two years ago, this is one event where Russia can send up to four athletes to the World Championships.

The men’s 5000m was won by Rinas Akhmadiyev. His time, 13:49.73, was an outdoor personal best, though he ran marginally quicker when winning the national indoor 5000m title earlier this year.

No Russian athlete has this year achieved the 13:15 ‘A’ standard or 13:20 ‘B’ standard in the 5000m, but as host nation they will be permitted to enter one athlete in each event. Akhmadiyev’s victory puts him in line for that place, though the Rybakov twins, Yevgeniy and Anatoliy, will also be in contention.

When Pole Vault World record-holder Yelena Isinbayeva turned up to Moscow for the National Championships, she hadn’t anticipated that there would be a qualifying round in her event. Long-time rival Svetlana Feofanova lent Isinbayeva her softer poles, and the two-time Olympic champion duly got over the automatic qualifying mark of 4.10m on her second attempt.

But former World record-holder Feofanova, who took bronze at the 2011 World Championships, was not so fortunate and failed to register a height.

Current world leader Oksana Kondratyeva, who has improved to 77.13m this year, led the qualifiers for the Hammer final, throwing 72.48m. European bronze medallist Anna Bulgakova was the only other athlete over 70 metres, throwing 71.69m.

Although guaranteed a place in Moscow, reigning World champion Tatyana Lysenko still turned up to compete and had the third-best mark of the day with 68.69m.

European Team Championships winner Dimitri Tarabin, who has been pre-selected in the Javelin, produced the biggest throw in the qualifying round with 79.99m, just five centimetres ahead of European silver medallist Valeriy Iordan. 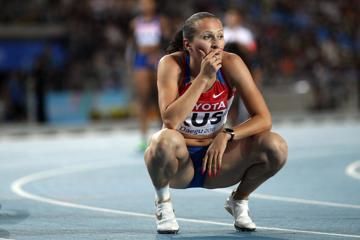 Team Russia is ready for the London Olympics ...