Ethiopia’s Meselech Melkamu secured her second marathon victory of the year, winning the women’s race in 2:23:21.

With temperatures rising from 9C at the start to 12C at the finish and with barely any wind, the conditions in Amsterdam were almost perfect for marathon running. “And I’m very grateful for the perfect organisation,” said Wanjiru said. “At 10km I missed my bottle, but they always have another one available. That was very important.”

During the first five kilometres, covered in 14:57, the pace was a bit too slow and a big group of 16 athletes followed the three pacemakers: Reuben Maiyo, Albert Kangogo and Edwin Kiptoo. After a bit of chaos at the first drinking spot, the pace settled down.

With intermediate times of 29:46 at 10km and 44:41 at 15km, the pacemakers gave the elite men a great chance of attacking the course record of 2:05:36 set by Wilson Chebet in 2013. Three-time winner Chebet was in the first group, trying to defend his position as the fastest man in the Amsterdam Marathon.

The leading group of 14, plus the one remaining pacemaker, passed the half-way mark in 1:03:18. With the wind on their backs, they were on their way back from the bridge across the Amstel river in Ouderkerk towards the city centre and Amsterdam’s Olympic stadium.

Sammy Kitwara started to push and the rest followed him and Kiptoo. There was a little gap at 30km, reached in 1:29:44, but the athletes regrouped. Chebet soon began to drift behind though, and he was followed by defending champion and two-time winner Bernard Kipyego.

Kiptoo, the last pacemaker, stepped aside at 32km, leaving just three athletes out in front: Kitwara, Mule Wasihun and Geoffrey Kirui. Wanjiru then joined them a few moments later.

Kirui pushed the pace and Wasihun was the first victim. Going into the final five kilometres, Kipyego, Ezekiel Chebii and Marius Kimutai were trying to hunt down the leading trio.

Kitwara, whose PB of 2:04:28 made him the fastest man in the field, seemed to be on his way to a big victory. But he had no response to Wanjiru’s acceleration over the last few kilometres in the Vondelpark as the Kenyan took victory in 2:05:21.

“After 30 kilometres I felt very comfortable and I decided that I could go to the leading group,” he said. “At 35km I had closed the gap and shortly afterwards I thought, ‘I can win this race. Let me try it’.”

Kitwara finished second in 2:05:45, his fastest time since his second-place finish at the 2014 Chicago Marathon when he set his PB. “All the others were running after me in the second half of the race,” he said. “But I knew I had to take initiative to run a good time. It’s just a pity that I didn’t win.”

Kimutai was another surprise, taking third place in 2:05:47, taking more than three minutes off his personal best.

With eight men finishing within 2:07 and 10 men running faster than 2:08, this was the second-best marathon in history in terms of depth. Only the 2012 Dubai Marathon had more sub-2:07 and sub-2:08 finishers.

The three favourites in the women’s race – Priscah Jeptoo, Meselech Melkamu and Meseret Hailu – ran alongside some men and official pacemakers during the early stages. Abebech Afework, Dibaba Kuma and Eunice Chumba were also in the leading pack and they passed 5km in 16:49.

Kuma was the first of the leading six who couldn’t cope with the pace. At 30km, reached in 1:40:59, just Melkamu, Chumba and Afework remained at the front with Hailu five seconds adrift and Jeptoo a further five seconds in arrears.

Melkamu was the strongest during the closing stages of the race. The 2009 world 10,000m silver medallist entered the stadium on her own and finished in 2:23:40.

“We were running in this big group, but when the pacemakers were gone, I decided that I had to break away,” she said. “And at 30km I was on my own.”

It was Melkamu’s third podium finish in a marathon this year, following her third-place finish in Dubai and her victory in Hamburg.

In the Dutch Championships, held in conjunction with the TCS Amsterdam Marathon, Khalid Choukoud and Ruth van der Meijden took the men’s and women’s titles respectively in 2:11:22 and 2:33:42. 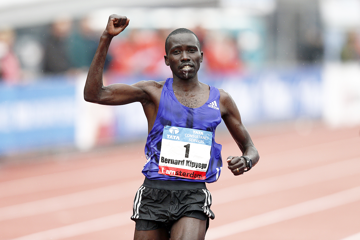 Kipyego and Chepkirui battle the cold to win ... 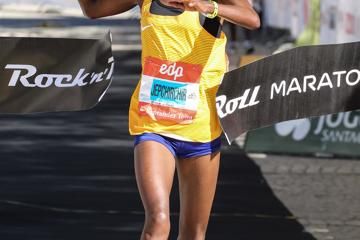 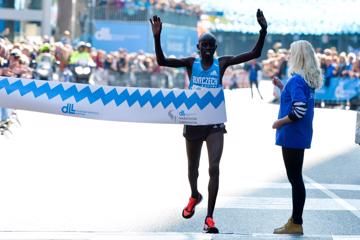