Running in his marathon debut, Festus Talam produced a stunning 2:06:26 victory at the 33rd DLL Marathon Eindhoven on Sunday (9).

The 21-year-old Kenyan, with 1:01:48 half marathon credentials this year, was enlisted as a pacemaker for the event in this city in the south of the Netherlands, assigned to bring the lead group through 35 kilometres on pace for a 2:06 finish. But once there and his duties done, he forged on impressively, mostly alone.

The race began at a steady pace, with the midway point reached right on target in 1:02:59. The lead group consisted of five men at 25 kilometres; the first to drop, just one kilometre later, was pre-race favourite Deriba Roba, who prior to the contest said he was gunning for a 2:04 time.

By 30 kilometres, Talam was still keeping up his end of the bargain, but only had Kenyans Stephen Chebogut, the defending champion, and Marius Kipserem, this year's Rotterdam Marathon winner, for company. But they too soon began to struggle with the tempo, and dropped back out of contention.

Besides some minor confusion in the final bend and approach to the finish, Talam maintained his composure over the final seven kilometres to finish unchallenged.

"I am more than happy with this win," said the unheralded Talam, whose best performance prior to his Eindhoven outing was a 1:00:56 runner-up finish at the Lago Maggiore Half Marathon in Verbania, Italy, last year. "To beat such athletes is a great feeling."

"We were aware of Festus' (late race) plans," said Race Director Edgar de Veer. "He felt strong and proved his fitness in the last kilometres. To debut in Eindhoven in 2:06:26 is a huge step. I am sure that he has a bright career ahead."

Organisers and Bob Ramsak for the IAAF 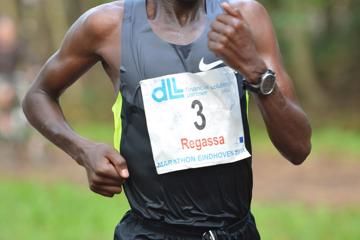 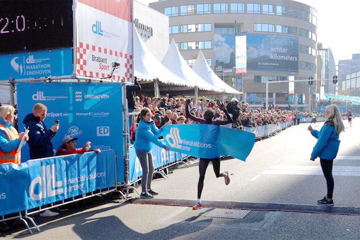