Abele, second after the first day, rallied as expected on his strong second day to nab his third victory at this competition, tallying 8481 points. Schäfer, the world silver medallist and two-time IAAF Combined Events Challenge winner, fought off the challenge by Austria's Ivona Dadic to maintain the lead she'd held since yesterday's opening discipline to successfully defend her heptathlon title here with 6549.

Abele, who trailed surprise overnight leader Manuel Eitel by just three points after the first day, started strong, clocking 14.01 in the 110m hurdles, the second fastest of the day, to take the lead with 5190 points, a lead he wouldn't relinquish. Ituah Enahoro of Nigeria clocked 14.35 to move into second 20 points ahead of Eitel, who clocked 14.68, with 5129.

The 20-year-old Enahoro narrowed the gap after the discus throw, reaching 47.56m, a lifetime best by nearly a metre, for 5949 after seven events. Abele threw 44.77m for 762 points, enough to hold a narrow three-point lead. Florian Obst, who tallied a lifetime best 8005 in late May to take the NCAA Division II title, improved his personal best to 50.97m, the second best throw of the day, to move into third overall with 5935, 14 behind Enahoro.

"I am super happy, mega happy," said Abele, whose 8605 personal best was set at this meeting two years ago. "After all that happened in the winter, with so many setback, facial nerve paralysis, muscular problems, I'm just overwhelmed." The performance earned him a spot on the German squad for the European Championships in Berlin in August.

Despite finishing well back in ninth place in the 1500m, clocking a 4:41.56 personal best, Eitel finished second with 8121, nearly 300 points better than his previous lifetime best of 7825 set in Talence last year. He edged Swede Marcus Nilsson, whose 8120 was also a personal best, by just one point.

Eighth after the first day, the 27-year-old worked his way up the rankings gradually on the second, propelled by a 14.58 PB in the 110m hurdles and 5.00m clearance in the pole vault.

World champion Kevin Mayer of France competed in three events, winning them all. He clocked 13.78 in the 110m hurdles, equalling the second fastest performance of his career; threw the discus 52.38m, a personal best by more than two metres; and topped 5.20m in the pole vault.

In the heptathlon, the battle between the Schäfer and Dadic continued event by event but with each discipline, the German illustrated her experience and continued to pull away.

Schäfer, who carried a 52 point lead into day two, produced the best jump of the morning in the long jump, reaching 6.19m for 908 points and 4736 after five events, to extend her lead to 83 points over the Austrian who reached 6.09m.

"I knew it would be a good two days," said Schäfer, whose season's debut was cut short after just two events in Gotzis last month after a trio of no throws in the shot put.

"Of course I had a big burden to carry, since there was only once chance left (to qualify for the European Championships). If I made 6549 in Ratingen off of training, hopefully more in possible in Berlin."

Further back, Mareike Arndt was third with a 6169 personal best tally. Louisa Grauvogel, the runner-up at the NCAA Championships eight days ago, was fourth with 6162, also a personal best. Both secured the remaining two spots on the German team for the European Championships.

BACK
Pages related to this articleAthletes
Arthur Abele 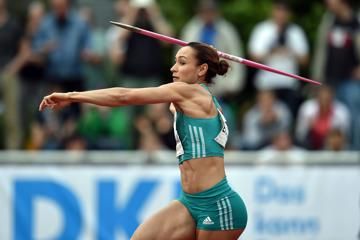 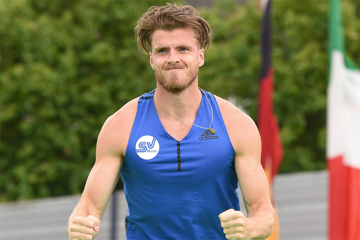 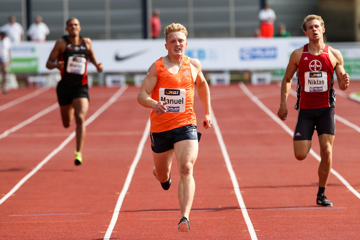 Tight at the top at the end of first day in R...