The race of the day with the largest number of participants (389) may have featured some big name athletes, but the winner was little-known Tamirat Tola in a tight-finish over Bonsa Dida.

After nine kilometres, Bonsa Dida started a breakaway with Tamirat Tola, Gebrehiwet and Abera the only ones able to follow.

In final kilometre, Dida and Tola exchanged the lead in a gripping contest. It looked like the experienced Dida would defeat his young rival but Tola kicked past him about 500 metres from the finish although Dida closed with the line in sight.

“This is my first appearance in the 12km senior race (at the national championships),” said a delighted Tola, who last year ran 2:06:17 on his marathon debut in Dubai. “Two years ago, I was in the junior’s 8km race, but my result was not good. By adding that little experience from that race, I prepared in a good way for this year and it paid off. I will try my best to get the same result and the gold medal in Guiyang.”

However, victory again went to the 2011 world junior cross-country silver medallist Genet Yalew, whose domestic dominance in the mud shows no sign of slowing.

The pack at the front was whittled down to five about three kilometres before the finish, with Yalew ahead of Ayalew, Haroye, Mamitu Daska and Senbere Teferi.

Yalew’s sustained front running gradually dropped everyone except Daska at the halfway point on the last lap before the latter also drifted away and Yalew capped her wonderful front running effort with a victory in 26:09.

Pre-race favorite Ayalew ended up in seventh ahead of elder sister Wude who took eighth and both will now be on standby as reserves for Ethiopia’s squad going to Guiyang.

“Two years ago in Poland, things went wrong from the start," said Yalew. "I wore myself out to catch the leaders and unfortunately could not succeed. I hope to run better in Guiyang."

The first came at the end of the third lap when the overwhelming favourite, world junior and world youth champion Yomif Kejelcha, dropped out of the contest.

The second surprise was the win by Yehunlign Adane, who crossed the line in 23:31 to triumph by one second from the defending champion, Yassin Haji.

“This year’s race was different because of the large number of competitors (there were more than 400),” said Adane. “So it was even difficult to get space at the beginning of the race. To be honest I was so doubtful (of my own prospects) and was even worried about being left out of the Ethiopian world cross country team.”

Victory in the junior women’s 6km race went to Letesenbet Gidey in 20:30, who won the contest ahead of Dagmawit Kbru and Etagegn Weldu, who were second and third in 20:31 and 20:32 respectively.

The 2015 IAAF World Cross Country Championships will be held on 28 March.

Elshadai Negash (with the assistance of Bizuayehu Wagaw) for the IAAF

BACK
Pages related to this articleAthletes
Genet Yalew 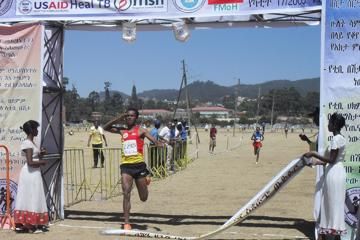