It just so happens that the last piece of international track and field action at the International Stadium in Gateshead was a 1.98m clearance that secured a personal best and a victory in the final event to be decided at the 2013 European Team Championships for the emerging young high jumper Mariya Kuchina.

Eight years on from that breakthrough senior performance – which came indoors after thunder, lightning and flash flooding rendered the outdoor field section too dangerous – the global queen of the high jump, now three-time world outdoor champion Mariya Lasitskene, takes part in the first event on the programme of the 2021 Wanda Diamond League opener at Gateshead on Sunday (23).

An uncertain mixed picture of sunshine and showers is forecast for the Muller Grand Prix Gateshead but the famous arena in the north-east of England will be flooded with stellar talent, with a cast featuring 10 reigning world or Olympic champions and a combined cache of more than 100 global medals.

Top billing, undoubtedly, has to go to the not so much loaded as overflowing women’s 100m. Sha’Carri Richardson, the trailblazing 21-year-old US sprint phenomenon who scorched to a 10.72 clocking in Florida in April, tests her rapidly rising pedigree against all three medal winners from the 2019 World Championships final in Doha.

Shelly-Ann Fraser-Pryce, the Jamaican Peter Pan Pocket Rocket of the women’s sprint game, was within 0.01 of her lifetime best with a 10.71 clocking that secured her fourth world 100m title in the Qatari capital. Silver medal winning Briton Dina Asher-Smith, who went on to take 200m gold, and bronze medallist Ivorian Marie-Josee Ta Lou are also on the start list for the heats, although Jamaica’s Olympic 100m and 200m champion Elaine Thompson-Herah has withdrawn because of injury.

Two weeks on from her heat and final sub-10.80 clockings in the World Athletics Continental Tour Gold meeting in Walnut, and on the back of her winning European circuit debut over 200m in Ostrava on Wednesday, Richardson has the chance that was denied her in 2019 when she failed to qualify for the US team for Doha. Since her eighth-placed finish at the US Championships final in Des Moines, the world U20 record-holder has won 10 successive 100m races (heats and finals).

Fraser-Pryce, now 34, is on a winning streak of seven 100m races, dating back to the Diamond League final in Brussels which preceded the 2019 World Athletics Championships, when she finished runner-up to Asher-Smith. Both Fraser-Pryce and Asher-Smith have yet to race over 100m in 2021, but have posted 200m times of 22.60 and 22.56 respectively.

Something will have to give.

Richardson proclaimed after her 10.74 and 10.77 clockings on the Mt SAC track in Walnut: “Every time I step on the track I want to make history.” She might need to run the fastest women’s 100m in Gateshead history to maintain her winning run. Weather permitting, the 10.93 stadium record could well be eclipsed.

For Richardson, a comfortable 200m winner in 22.35 in Ostrava, it will be a first Diamond League test outside the United States. In 2019 she finished fourth in the 100m at the Prefontaine Classic in Stanford, clocking 11.15 in a race won by Ta Lou in 11.02, with Fraser-Pryce a distant eighth in 11.39. She also placed third in a high school girls’ 200m that preceded the Diamond League programme in Eugene in 2017.

At 21, Mondo Duplantis already seems like a Diamond League veteran, with eight meet victories to his name. The Swede extended his unbeaten record to a 23rd competition with his 5.90m clearance in Ostrava, confessing to feeling rusty in his season’s opener.

The 6.18m world record-holder will be seeking to return to six-metre-plus form in Gateshead, where he will again be up against Sam Kendricks, the US rival who inflicted his last defeat, in the 2019 world final. Bronze medal winning Pole Piotr Lisek completes a rematch of the podium trio from Doha.

Lasitskene is another star performer on a long-term winning streak. The 28-year-old is unbeaten in 14 competitions dating back to September 2019 and her third-placed finish in the Europe v USA match in Minsk.

In her first outdoor test of 2021, however, she faces Yaroslava Mahuchikh, the 19-year-old Ukrainian who cleared a world U20 record of 2.04m in losing to her on countback in the epic 2019 world final. The fourth and fifth placers from Doha are also in the field: Mahuchikh’s compatriot Yulia Levchenko and Kamila Licwinko of Poland.

European record-holder Jakob Ingebritsen faces the rising Australian duo Ollie Hoare and Stewart McSweyn in a 1500m race that also includes Adam Ali Musab, the Qatari who ran a world-leading 3:32.41 in Doha back in February.

Fresh from a 19.93 (-0.6m/s) victory in Ostrava, Kenny Bednarek lines up against four of the first six finishers from the world 200m final two years ago. Canada’s Andre de Grasse (third in Ostrava) and Ecuador’s Alex Quinonez picked up silver and bronze behind Bednarek’s US rival Noah Lyles in Doha, while Briton Adam Gemili and Canada’s Aaron Brown placed fourth and sixth.

The 3000m steeplechase features the three fastest men on the 2020 world list. Soufiane El Bakkali, the Moroccan who took bronze and silver in the last two world finals, Kenyan Leonard Bett and France’s Djilali Bedrani will all be making their 2021 debuts over the barriers.

Nicholas Kimeli, one of the fastest men in the world last year over 5000m and 10,000m, will take on fellow Kenyans Jacob Krop and Michael Kibet in the 5000m. If the race is tactical, watch out too for in-form Spaniard Mohamed Katir. Australia’s David McNeil, Spain’s Adel Mechaal and Britain’s Andy Butchart should also be in contention.

Four weeks on from her solo 4:01.54 victory at the USATF Grand Prix in Eugene, European champion Laura Muir returns to British soil for her second 1500m of the season. The world indoor silver medallist ended her US training and racing spell looking sharp, with a 1:58.71 victory over 800m at the Track Meet in Irvine last weekend.

Fellow Briton Katie Snowden advanced her PB to 4:02.98 with a win in the 1500m in the same Californian event and will be seeking to back up that breakthrough win in a face that also features sub-four performers in 2014 world indoor silver medallist Axumawit Embaye of Ethiopia and Rababe Arafi of Morocco. Uganda’s 800m specialist Winnie Nanyondo and, at the other end of the spectrum, Britain’s European 5000m silver medallist Eilish McColgan are also in the field.

In the field, in addition to Lasitskene, there will be two other world champions seeking to crank their Olympic season into gear.

Tajay Gayle, the Jamaican long jumper who stunned the world with his 8.69m gold medal leap in Doha, already has a 8.27m mark to his name this year. Grenadine javelin man Anderson Peters will be looking to build on the 83.39m he threw for second place behind Johannes Vetter’s monster 94.20m in Ostrava. 2012 Olympic champion Keshorn Walcott, third in the Czech Republic with 82.75m, is also in the field.

Tajay Gayle in action at the Diamond League meeting in London

Gayle’s Jamaican teammate Kimberly Williams will be looking to reproduce her winning form from Mt SAC earlier this month where she won with 14.62m. But US record-holder Keturah Orji, who finished second on that occasion, will be out for revenge.

The 100m hurdles promises to be a domestic sisterly affair, with Cindy Sember lining up against Tiffany Porter, whose British record she missed by a mere 0.02 with a 12.53 clocking at Mt SAC. 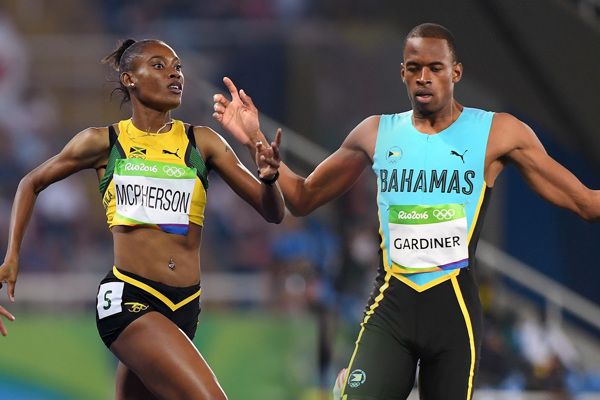