World records under threat in Brussels

The King Baudouin Stadium in Brussels will be empty of spectators for Friday night’s Wanda Diamond League exhibition meeting but brimming with ambition as the 44th edition of the AG Memorial Van Damme will see three world records being targeted.

Kenya’s Olympic 1500m champion Faith Kipyegon will challenge the women’s 1000m mark while the men’s and women’s one-hour records will be under threat from, in the first instance, Britain’s multiple world and Olympic champion Mo Farah, and in the second, world 1500m and 10,000m champion Sifan Hassan of the Netherlands and Kenya’s world marathon record-holder Brigid Kosgei.

Kipyegon will be attempting to better the mark of 2:28.98 set by Russia’s double Olympic champion Svetlana Masterkova on the same track in 1996. And the Kenyan will approach her task with plenty of confidence given her performance in the opening Diamond League meeting of the season in Monaco last month, where she finished just 17 hundredths of a second adrift of the Russian’s time.

Now 37, Farah – winner of the 5000m and 10,000m at the last two Olympics – is returning to the track for the first time since switching to road racing in 2017 and has prepared for his effort at the high altitude of Font Romeu in the Pyrenees.

He has been accompanied by training partner Bashir Abdi, who won European 10,000m silver for Belgium at the 2018 European Championships and who, like Farah, was born in Mogadishu, capital of Somalia.

The mark they are targeting was the last world record set by Ethiopia’s multiple world and Olympic champion Haile Gebrselassie, who managed to cover 21,285 metres in 2007 on the track in Ostrava.

Asked what he believed he could do in Brussels, Farah – who will act as a pacemaker at the London Marathon on October 4 – responded: “What distance do I have in mind? I don't have to say what I think I can do, it doesn't matter. I just have to do it on September 4th.

“I can only say that I look forward to it very hard and believe in it. I want to improve that world record.

“The AG Memorial Van Damme will be my first race since the Chicago Marathon last October. I was struggling with an injury and then all races were cancelled due to the corona pandemic.

“In my career I have always focused on taking titles at the big championships, but when I was asked to take a shot at the world hour record, I did not hesitate. My tactic? It will be a question of maintaining an even pace.

“The first 10 to 15 km Bashir and I will certainly stay together. Then we will see. Bashir has his own goals. We are good friends off the track, but we each go our own way in the race.”

If Farah succeeds in his bid to better Gebrselassie’s 13-year-old effort, he will officially become the 12th man in history to hold the one-hour world record, reclaiming a distinction that was first achieved by a fellow Briton, Alf Shrubb, in 1904 when, despite “a violent breeze and sodden track” he covered 18,742m in his designated time, breaking records for six, seven, eight, nine, 10 and 11 miles en route.

Since then this blue riband achievement has passed among other legends of the sport including France’s 1912 Olympic 5000m silver medallist Jean Bouin, the ‘Flying Finn’ Paavo Nurmi, Emil Zatopek, Ron Clarke, Gaston Roelants, Jos Hermens and of course Gebrselassie.

When Hermens improved his own world record to 20,944m at the all-weather track in Papendal in May 1976 he pioneered technological support that will be available to the runners on Friday, having police beacons placed at each 200m mark which would flash roughly twice a minute to indicate the precise world record pace.

“This would tell me during the race without having to worry about watches and time splits whether I was on schedule,” he told World Athletics this week. “I guess it was the first form of Wavelight technology.”

Hermens came up with the Wavelight concept in which flashing lights are fitted to track rail to aid athlete pacing as seen at Diamond League meets in Oslo and Monaco this year, and which will be in place on the King Baudouin Stadium track.

Hermens also arranged for a playlist of his favourite tunes to be broadcast during his effort, and Farah and Abdi have done the same thing, with the help of suggestions by fans via social media.

Meanwhile the audience simulation technology that has been used at meetings this season, artfully employing recordings of previous competitions to enliven the atmosphere, will also be in play on Friday.

“I'm really looking forward to it!” Farah added. “We are going to make a great show in Brussels.”

The women’s one-hour race involves a fascinating struggle between two of the world’s outstanding athletes as Hassan and Kosgei attack the mark of 18,517m set by Ethiopia’s Dire Tune at the Ostrava Golden Spike meeting in 2008.

Last year in Doha Hassan became the only athlete in history to win the 1500m and 10,000m at a single World Championships. In 2019 she also become the world record-holder for the 5km road race – running 14:44– and the mile, where she clocked 4:12.33, with both events being held in Monaco.

Her range stretches – for the moment – to the half marathon, where she set the European record of 1:05:15 at Copenhagen in 2018.

Kosgei, 26, bettered that time on September 8 last year when she won the Great North Run in Newcastle-upon-Tyne in 1:04:28, although that mark could not be officially ratified by World Athletics because of the nature of the course.

There were no asterisks involved just over a month later, however, when she retained her Chicago Marathon title in a world record time of 2:14:04, a personal best of more than four minutes which bettered Paula Radcliffe’s 2003 mark of 2:15:25.

She finished more than six minutes ahead of the nearest challenger, Ethiopia’s Ababel Yeshaneh, who in February of this year set the official world half marathon record of 1:04:31 in Ras Al Khaimah.

And she is determined to make her mark in the Belgian capital as she prepares for the defence of her London Marathon title on October 4.

Also in the field is Israel’s Lonah Chemtai Salpeter, the European 10,000m champion.

Norway’s 19-year-old European 1500m champion Jakob Ingebrigtsen, whose consolation for two narrow defeats by Kenya’s world champion Timothy Cheruiyot this season has been a European record of 3:28.68, will return to the track once again for the metric mile.

While Cheruiyot will not be present on this occasion, the wonderboy will nevertheless face a strong field which includes Spanish duo Jesus Gomez, the European indoor bronze medallist, and world indoor 800m bronze medallist Saul Ordonez.

The field for the men’s pole vault is due to include world record-holder Armand Duplantis of Sweden, Olympic champion Thiago Braz of Brazil and US vaulter Christopher Nilsen, who beat Duplantis to the NCAA title last year.

Duplantis will come fresh from the outdoor personal best clearance of 6.07m he required to beat Sam Kendricks in the Wanda Diamond League exhibition event in Lausanne, where the US vaulter cleared 6.02m, his second-best ever height behind the 6.06m he managed last year.

The 20-year-old phenomenon, who cleared 6.17m and 6.18m indoors earlier this season, will try to put himself in a position to have another go at beating 6.14m, the best ever outdoor mark set by Sergey Bubka in 1994.

Belgium’s Ben Broeders will hope to improve upon his national record of 5.76m in such strong company.

The men’s one-hour race was also to have featured Sondre Nordstad Moen, who set a European 25,000m record in June at the Oslo Diamond League ‘Impossible Games’ exhibition meeting, clocking 1:12:46.5. The Norwegian withdrew from the race earlier this week, although he says he will be fit and ready for the London Marathon.

While the shot put element of that event has been cancelled, the 100m hurdles and high jump remain, and both will feature the Briton who took the world title from Thiam in Doha last year, Katarina Johnson-Thompson.

With a personal best of 13.09, and a season’s best of 13.73, Johnson-Thompson will be challenged in the high hurdles by the presence of Dutch athlete Sharona Bakker and Belgium’s Anne Zagre, who have respective bests of 12.85 and 12.71.

In the high jump the Briton will face Australia’s Nicola McDermott, whose personal best of 1.98m, set this season, matches hers. Sweden’s Erica Kinsey, with a best of 1.97m, is also in the field.

In place of the cancelled shot put there is now a women’s 100m featuring 20-year-old home sprinter Rani Rosius, who recently won the Belgian title in this stadium with a time of 11.39, the second-fastest national time behind the record of 11.04 set by 2006 European champion Kim Gevaert.

Home eyes in the men’s 200m will be upon Jonathan Borlée as he races against Italy’s Eseosa Desalu, while Polish duo Iga Baumgart-Witan and Patrycja Wyciszkiewicz-Zawadzka will clash in the women's 400m. 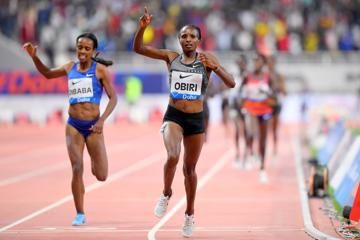 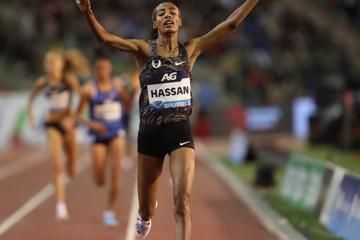 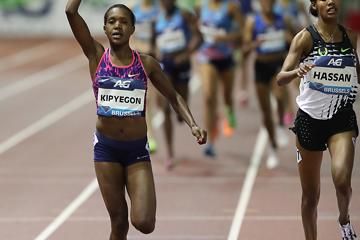 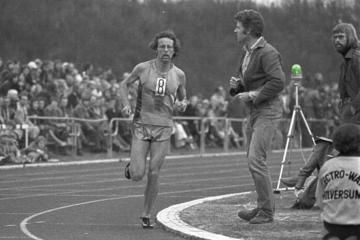