Gulnara Galkina becomes the first woman to break nine minutes for the steeplechase, breaking her own world record (© Getty Images)

Beijing, ChinaThe lucky flowers, the cooler weather, the crowd urging her on. How could Gulnara Galkina-Samitova possibly fail?

How different the Olympic experience is this time for the 30-year-old Russian compared with four years ago. So exhausted was she after finishing sixth in the 5000m in Athens that she disappeared from the track scene and did not re-emerge until 2006.

Now, exhilarated by her triumph here, she intends to return to the Olympic 5000m event which still haunts her, starting in the heats tomorrow. Although Ethiopia will be expected to dominate, Galkina-Samitova might trouble them. She has slashed her personal best this season by 20 seconds, to 14:33.13.

The lucky flowers are on standby for inspiration. After stopping the clock at 8:58.81 last night, to beat by 2.78sec the World record she had set shortly before the Athens Olympics, Galkina-Samitova explained the story of the flowers.

Back at the team camp, at five o’clock on the afternoon of her final, Galkina-Samitova was heading for the coffee shop with her coach. She crossed paths with Valeriy Borchin, winner of the men’s 20km Walk the day before.

“He gave me a bunch of flowers (from his medal ceremony) and my coach told me that, if I accept the flowers, I will win,” Galkina-Samitova said. But, rather than keep them for herself, she said they should stay on display to help all Russian athletes.

I have decided with my coach not to remember Osaka

For the World record, though, it took more than flowers. Galkina-Samitova needed the crowd’s help and a drop in temperature. A cool evening in the stadium was a joy for her after she suffered in the heat and humidity of Osaka at the World Championships last year.

Although she held the world’s fastest Steeplechase time of 2007 going into Osaka, Galkina-Samitova finished only seventh. Her failure denied Russia a sweep of the medals as Yekaterina Volkova and Tatyana Petrova took gold and silver. Here Volkova was third and Petrova fourth as Kenyan silver medallist, Eunice Jepkorir, intercepted a Russian sweep this time.

“The weather was much better than in Osaka,” Galkina-Samitova said. “I expected much worse conditions. We were prepared for the worst conditions and that is why I did not think I would be able to break the World record.

“But the conditions were favourable. The stadium is magnificent, and so were the spectators, and that is why I managed to break the World record. The spectators were so emotional.”

Galkina-Samitova would rather not be reminded of Osaka and the same goes for Athens. “I don’t want to talk about these problems,” she said. “I went to Osaka with good results but I got only seventh place. I have decided with my coach not to remember Osaka.”

Training with the men

So far as Athens is concerned, Galkina-Samitova said: “I was completely exhausted physically and mentally after all this pressure of the Olympic year. My dream was to enjoy family life, to be a wife and probably a mother.”

Immediately after Athens, the then Gulnara Samitova married Anton Galkin, an international 400m runner and hibernated from athletics. “I just needed some rest and change in my life,” she said. “That’s why, for a year, I was not training at all.”

In 2006 she returned not only with a new name but a new coach. Minulla Chinkin was 76-years-old and had to give way. “It was physically difficult for him to follow me at the training camps, to stand all this crazy tempo of training and competitions,” Galkina-Samitova said.

Two coaches later – Tatyana Senchenko took over from Chinkin but it was only a short partnership – Galkina-Samitova joined the national distance running squad under the head coach, Gennady Suvorov. Training mainly with men has been one of the main reasons for the improvement in the new Olympic champion

“I had been training under the coach who was my ‘grandfather’ but, under Suvorov, we have changed all the methods – the technique and endurance preparation,” Galkina-Samitova said.

Even Chinkin would not have been old enough to remember the first men’s Olympic Steeplechase because it has taken 88 years for women to be given equal rights to men in this event.

The winner in 1920 was a British athlete, Percy Hodge, who led the field in Antwerp on a grass course set inside a cinder track with a hedge for a water jump. His winning time was outside 10 minutes. Now women – or one at least – is in eight-minute territory. 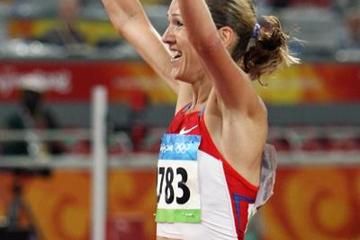