On Sunday (22) the Italian capital will celebrate the 21st edition of the Acea Rome Marathon. The IAAF Gold Label Race can claim to be the fastest marathon in Italy as it boasts both the men’s and women’s all-comers’ records.

The course records of 2:07:17 and 2:22:53, set by Benjamin Kiptoo in 2009 and Galina Bogomolova in 2008 respectively, are not likely to come under threat this year, but the races look set to be competitive.

Ethiopia boasts a strong tradition in Rome and they will be looking to continue their dominance this year. Habtamu Assefa and Teshome Gelana are bidding to follow in the footsteps of their compatriot Shume Hailu who won last year’s edition in 2:09:47 on a rainy day.

Assefa represented Ethiopia at the 2012 IAAF World Half Marathon Championships and clocked his personal best of 2:08:28 at the 2013 Dubai Marathon.

The fastest Ethiopian in the field is Teshome Gelana who clocked 2:07:37 when winning the 2010 Houston Marathon but has not run faster than 2:10 for nearly five years. This will be his second marathon of 2015 after finishing runner-up in Tiberias.

Another sub-2:09 runner from Ethiopia is Negewo Degefa who has a lifetime best of 2:08:46.

The Kenyan challenge is led by John Kipkorir Komen, who boasts the best time of the entire field. The 37-year-old set his PB of 2:07:13 four years ago, but in his most recent marathon he finished runner-up in la Rochelle in 2:14:27.

Morocco’s Mustapha El Aziz could be the real surprise package. In just his second marathon, he clocked a personal best of 2:07:55 to finish third in Seoul in 2013. This will be his first marathon since then, having won the African 10,000m silver medal in between.

The fastest European runner in the field is Ukraine’s Oleksander Sitkovskiy. The Olympic marathon 12th-place finisher is in top form, having set a PB of 2:09:11 to finish third in Marrakech in January. His best before that was set on Italian soil, clocking 2:09:14 to win the 2013 Florence Marathon.

Italy’s 40-year-old Ruggero Pertile has good memories of Rome, having won the 2004 edition. Although a veteran, he finished seventh at the European Championships in Zurich last summer.

Two more Italian runners Andrea Lalli and Ahmed El Mazoury will run 25-30km in preparation for future spring marathons. Lalli will run the Rotterdam Marathon, while El Mazoury will make his debut over the distance in Milan on 12 April.

With Ayelu Lemma winning the women’s race last year, it was the third time that Ethiopians had won both races at the Rome Marathon. Lemma won’t be back to defend her title, but there’s still a good chance of another Ethiopian victory.

Meseret Kitata starts as one of the strong favourites. Although she finished a distant 19th in Dubai earlier this year, she placed in the top two in all three of her marathons in 2014, winning in Marrakech and setting a PB of 2:27:26 to finish second in Ottawa.

Three other Ethiopians will vie for podium positions: Alem Fikre Kifle, Alemu Mokonnin Ourge and Aymadis Moges Admasu, all of whom have PBs faster than 2:32.

Mayorova set her fastest time of 2:23:52 in Nagoya in 2012, a result which qualified her for the Olympic Games in London where she finished ninth in 2:25:38. The 37-year-old has also won marathons in Yokohama, Nagano and Dubai.

Burkovska won the 2013 Hannover Marathon in a personal best of 2:27:07, but she may be running on tired legs in Rome as she ran 2:29:45 earlier this month to finish ninth in Nagoya.

Italy’s experienced 37-year-old Deborah Toniolo will make her Rome Marathon debut. Toniolo clocked her best time of 2:28:31 in 2006 and returned to her best form last November when she finished third in Turin and 16th at the European Championships, having given birth to her daughter Giorgia in September 2012.

BACK
Pages related to this articleAthletes
Albina Mayorova 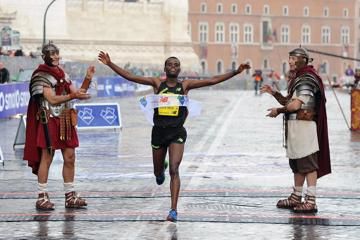 Ethiopia's Hailu and Lemma win in the rain at...